CONSPIRACY NIGHT AT THE MOVIES: The Disappearance of Flight 412 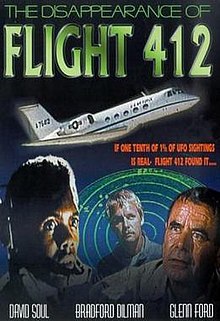 The Disappearance of Flight 412 is a 1974 made-for-television science fiction drama film starring Glenn Ford, Bradford Dillman, David Soul and Guy Stockwell. The film was shot at Oxnard Air Force Base and Edwards Air Force Base.

U.S. Air Force Colonel Pete Moore (Ford) is commander of the Whitney Air Force Base Radar Test Group, which has been experiencing electrical difficulties aboard its aircraft. To ferret out the problem, he sends a four-man crew on Flight 412. Shortly into the test, the jet, a small twin-engine VIP transport, picks up three blips on radar, and subsequently, two fighters scramble and mysteriously disappear. At this point, Flight 412 is monitored and forced to land by Digger Control, a top-level military intelligence group that debunks UFO information, at a remote, abandoned military airfield somewhere in the desert in the American Southwest. The crew is taken to a barracks building and undergo an 18-hour debriefing which amounts more to an indoctrination, to convince them that they did not see a UFO. Meanwhile, their plane is stored in a dilapidated hangar, so it cannot be seen by search-and-rescue aircraft. To all appearances, Flight 412 has simply vanished into thin air. The intrepid colonel, kept in the dark about his crew, decides to investigate the matter himself.

The film starts out with stock black-and-white clips of UFOs in flight and various individuals reporting sightings in newsreel style, with narrator voice-overs, to set the mood. However, the remainder of the film (in color) deals only briefly with the fictitious UFO encounter by the aircrew, and mostly with their ordeal as they undergo an arduous debriefing and brainwashing at the hands of their somewhat mysterious captors. It uses on-screen time stamp titles to lend the feeling of a documentary, similar to the 1971 film The Andromeda Strain.