CONSPIRACY NIGHT AT THE MOVIES: The Mouse that ROARED

FOREIGN POLICY COMEDY STYLE In light of North Korea moving ONE missile to the coast, the world must cower in fear. The joy of aging is we've seen it all before in a Peter Sellers comedy The Mouse that ROARED. ENJOY! If we build a nuke and threaten the United States, we can get oodles of money. What a joke. 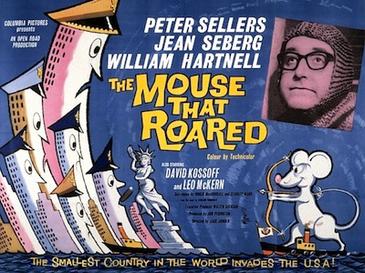 The Mouse That Roared is a 1959 British satirical comedy film based on the 1955 novel The Mouse That Roared by Leonard Wibberley. It stars Peter Sellers in three roles: Duchess Gloriana XII; Count Rupert Mountjoy, the Prime Minister; and Tully Bascomb, the military leader. It also co-stars Jean Seberg. The film was directed by Jack Arnold, and the screenplay was written by Roger MacDougall and Stanley Mann.

The Mouse That Roared is a 1955 Cold War satirical novel by Irish-American writer Leonard Wibberley, which launched a series of satirical books about an imaginary country in Europe called the Duchy of Grand Fenwick. Wibberley went beyond the merely comic, using the premise to make still-quoted commentaries about modern politics and world situations, including the nuclear arms race, nuclear weapons in general, and the politics of the United States.

The novel originally appeared as a six-part serial in the Saturday Evening Post from December 25, 1954 through January 29, 1955, under the title The Day New York Was Invaded. It was published as a book in February 1955 by Little, Brown.[1] The British edition[2] used the author's original intended title, The Wrath of Grapes, a play on John Steinbeck's The Grapes of Wrath.

Wibberley wrote one prequel (1958's Beware of the Mouse) and three sequels: The Mouse on the Moon (1962), The Mouse on Wall Street (1969), and The Mouse that Saved the West (1981). Each placed the tiny Duchy of Grand Fenwick in a series of absurd situations in which it faced superpowers and won.

The prime minister decides that their only course of action is to declare war on the United States. Expecting a quick and total defeat (since their standing army is tiny and equipped with bows and arrows), the country confidently expects to rebuild itself through the generous largesse that the United States bestows on all its vanquished enemies (as it did for Germany through the Marshall Plan at the end of World War II).

Instead, the Duchy defeats the mighty superpower, purely by accident. Landing in New York City, almost completely deserted above ground because of a city-wide disaster drill, the Duchy's invading "army" (composed of the Field Marshal Tully Bascomb, three men-at-arms, and twenty longbowmen) wanders to a top secret government lab and unintentionally captures the "Q-bomb" (a prototype doomsday device that could destroy the world if triggered) and its maker, Dr. Kokintz.

The invaders from Fenwick are sighted by a Civil Defense Squad and are immediately taken to be "men from Mars" when their mail armor is mistaken for reptilian skin. The Secretary of Defense pieces together what has happened (with help from the five lines in his encyclopedia on Grand Fenwick and the Fenwickian flag left behind on a flagpole) and is both ashamed and astonished that the United States was unaware that it had been at war for two months.

With the most powerful bomb in the world now in the smallest country in the world, other countries are quick to react, with the Soviet Union and the United Kingdom offering their support. With the world at the tiny country's mercy, Duchess Gloriana, the leader of Grand Fenwick, lists her terms: all the nuclear weapons of the powerful nations must go through an inspection by impartial scientists and the "Tiny Twenty" (a joke about the "Big Three" Nations) should be formed, a group of twenty small nations so that small nations can get their voices heard as well as large ones. Soon Duchess Gloriana and Tully Bascomb get married, and during the wedding Dr. Kokintz discovers that the bomb is a dud and that the bomb Grand Fenwick used to threaten the world into obedience never had any power whatsoever. However, Dr. Kokintz decides to keep that fact to himself considering that the pretense still furthers the cause of world peace.