The Sinking of the Wilhem Gustloff 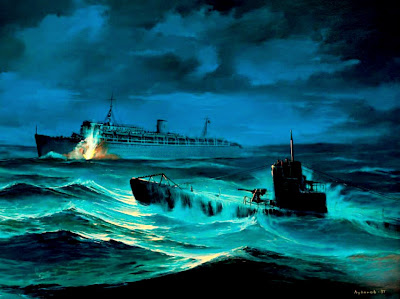 On the cold bitter night of January 30th 1945.., just 3 months before the end of World War II (as Germany was in full retreat !).., on the Baltic Sea.., just a few hundred kilometers from the port of Gotenhafen (near Danzig).., the DEADLIEST maritime disaster in all of recorded history occurred !! Yet almost no one.., has ever heard about the sinking of the Wilhelm Gustloff... It has VERY conveniently become an atrocity (in the true sense of the word !).., that has been "Exiled from History" !!! The loss of life on that ship, was equal to more than the sinking of the "Titanic" SIX TIMES over !! But yet.., the Titanic has been the most widely publicized maritime disaster to date (movies, documentaries, books, memorials, etc.) ! Furthermore.., the sinking of this "refugee ship", the Wilhelm Gustloff.., which was loaded to more than FIVE TIMES its normal capacity (with mostly women and children).., and then mercilessly AND cold-bloodedly torpedoed by a Russian submarine.., is by far.., the GREATEST unknown AND unpublicized single disaster in modern history... The link below is one of the most comprehensive web-site on the subject: http://www.wilhelmgustloff.com/welcom... This documentary is about 44 minutes long and has a "watchable" quality of A9 / V8 As always.., after watching.., do your best to "pass it on"..... !!! Truth Does Not Fear Investigation !!! Also something VERY important to remember is.., "He who Wins the War.., also Writes the History"