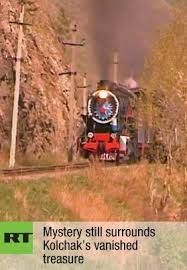 In the early 20th century, a train carrying gold reserves of the Russian Empire went on a journey across the country -- but never reached its destination.

The gold mysteriously disappeared. The legends surrounding this story are alive to this day.

According to scientists, part of the gold reserves are thought to have sunk in Baikal -- the world's deepest lake.

But some claim it's hidden in Siberian monasteries. Others -- that it's in caves in the country's Far East, or even in what is now the Czech Republic.

The treasure was being transported by Admiral Aleksandr Kolchak's White Army as it fled the advancing Bolsheviks during the Russian civil war.

Where in Siberia is the last Tsar of Russia's 'missing' gold?

It may come as a surprise to many that the United States, Britain, France and Canada fought in the Russian civil war. The fought on the Tsar's side. I'm sure their motives were golden. There was another infamous gold train as well at the end of WWII leaving Hungary with a large supply of gold. One of the allegations was the Czechoslovakian troops returned home with a large portion. Perhaps it rode the rails twice. Who knows? However, at least we explore those strange events in history.