CONSPIRACY NIGHT AT THE MOVIES: Cypher 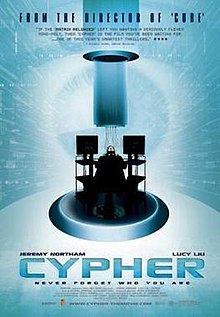 Cypher (also known as Brainstorm), is a 2002 science fiction thriller film starring Jeremy Northam and Lucy Liu. The film was written by Brian King and directed by Vincenzo Natali. The film was shown in limited release in theaters in the USA, and released on DVD on August 2nd 2005.

Morgan Sullivan (Northam), a recently unemployed accountant, is bored with his suburban life. Pressured by his wife to take a job with her father's company, he instead pursues a role in corporate espionage. Digicorp's Head of Security, Finster (Bennett), inducts Morgan, and assigns him a new identity. As Jack Thursby, he is sent to conventions to secretly record presentations and transmit them to headquarters. Sullivan is soon haunted by recurring nightmares and neck pain. When he meets Rita Foster (Liu) from a competing corporation, his life starts to become complicated.

Rita gives him pills to cure his pain and nightmares, and tells him not to transmit at the next convention. After the convention, Digicorp confirms the receipt of his transmission, though Morgan sent nothing. Sure that something strange is going on, Morgan takes the pills Rita gave him. They work. Confused by what is going on, and intrigued by Rita, he arranges to meet with her again.

Rita advises Morgan of Digicorp's deception, and invites him to accept the antidote — a big syringe of green liquid. Morgan hesitantly accepts. She warns him that no matter what happens at the next convention he must not react.

Morgan discovers that all the convention attendees are spies like him, and all thinking themselves individual spies working for Digicorp. While they are drugged from the served drinks, plastic-clad scientists probe, inject and brainwash them. Individual headsets reinforce their new identities, preparing them to be used, and then disposed of.

Morgan manages to convince Digicorp that he believes his new identity. He is then recruited by Sunway Systems, a rival of Digicorp. Sunway's Head of Security, Callaway (Webber), encourages Morgan to act as a double agent, feeding corrupted data to Digicorp.

Morgan calls Rita, who warns him that Sunway are equally ruthless, and that he is in fact being used by Rita's boss, Sebastian Rooks. Morgan manages to steal the required information from Sunway Systems' vault, escaping with Rita's help.

Rita ultimately takes him to meet Rooks. When she temporarily leaves the room, a nervous Morgan calls Finster, and becomes even more distressed. He accidentally shoots Rita, who encourages him to ignore her and meet Rooks in the room next door. Morgan finds the room filled with objects which appear to be personal to him, including a photograph of him and Rita together. Realising that he is apparently Rooks, he turns to Rita in disbelief.

Before Rita can convince him, the apartment is invaded by armed men. Rita and Morgan escape to the roof of the skyscraper as the security teams of Digicorp and Sunway meet, led by Finster and Callaway. After a short Mexican standoff, both sides realise they are after the same person, Sebastian Rooks, and rush to the roof.

Morgan and Rita are on the roof in the helicopter — Rita is unable to fly it, but Sebastian can. Rita encourages Morgan to remember his past self, connecting through his love for her. He suddenly remembers, and lifts off amid gunfire from the security teams. Finster and Callaway comment as the couple seem to have escaped:

Callaway: "Did you get a look at him? Did you see Rooks' face?"

Looking up, they see the helicopter hovering above and realise, too late, the true identity of Morgan Sullivan. Sebastian triggers a bomb, causing the whole roof to explode.

On a boat in the South Pacific Ocean, Sebastian reveals the content of the stolen disc to Rita. Marked "terminate with extreme prejudice", it is the last copy of Rita's identity (after the one in the vault was destroyed). Sebastian throws the disc into the sea, and the film closes: "Now there's no copy at all.."