Of course imagine a dangerous fifth column of communists seize the reigns of power in the White House and Senate and House. They ban weapons and then invite their commie friends to have America for fun and profit. I haven't seen the film yet. I liked the original. You may learn what freedom is and what it takes to keep it. It is a good lesson. The TRAITORS banning guns should be IMPEACHED and IMPRISONED in Guantanimo. They swore an OATH to preserve protect and defend something. They lied and are tearing it asunder. That is TREASON! 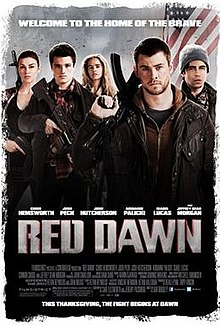 Red Dawn is a 2012 American war film directed by Dan Bradley and written by Jeremy Passmore and Carl Ellsworth, based on the 1984 film of the same name. The film stars Chris Hemsworth, Josh Peck, Josh Hutcherson, Adrianne Palicki, Isabel Lucas, and Jeffrey Dean Morgan. The film centers on a group of young people who defend their hometown from a North Korean invasion.

Metro-Goldwyn-Mayer announced their intentions to remake Red Dawn in May 2008 and subsequently hired Bradley and Ellsworth. The principal characters were cast the following year and the film went into production in September 2009 in Mount Clemens, Michigan. Originally scheduled to be released on November 24, 2010, the film was shelved due to MGM's financial troubles. While in post-production, the invading army was changed from Chinese to North Korean in order to maintain access to China's box office. FilmDistrict bought the U.S. distribution rights in September 2011 and the film was released in the United States on November 21, 2012.

A prologue details how the United States is isolated and vulnerable to an invasion: The European Union suffers an economic crisis, resulting in the struggling of NATO. North Korean leader Kim Jong Il dies from a stroke, passing the title of Supreme Leader of North Korea to his son, Kim Jong Un. Russian ultra nationalists seize control of Russia, forming a military alliance with North Korea. Due to various worldwide conflicts, the U.S. deploys much of their military to various parts of the world, such as the Middle East, South East Asia and the Korean peninsula to ensure regional stability, leaving the United States vulnerable.

U.S. Marine Jed Eckert returns to Spokane, Washington on leave and reunites with his father, Police Sergeant Tom Eckert and his brother, football player Matt Eckert. After a mysterious power outage, Jed and Matt learn that North Korean paratroopers are invading the town. Matt witnesses an F-16 take out a Korean transport plane while he leaves with Jed in a pick-up truck. While Tom helps the townspeople Jed and Matt flee to their cabin in the woods with Robert Morris, Daryl Jenkins, Greg Goodyer, Julie Goodyear and Pete in tow. They are later joined by Toni Walsh and Danny Jackson. Pete betrays the group to the North Koreans, resulting in Tom and Darryl's father, Mayor Jenkins, being brought by North Korean commander Captain Cho to the cabin in order to persuade them to surrender. Tom says his final words to his sons, telling them to resist, before being executed by Cho in front of the brothers.

Jed announces that he will fight, so the rest decide to join him. They steal weapons from the North Koreans and set up a base in the nearby mine in the woods. Jed teaches the teenagers how to fight. Once they are ready, they name themselves "The Wolverines" after their school mascot and begin a series of attacks on the Korean forces, including executing Pete for his betrayal. Then one day, Matt jeopardizes a mission to rescue his girlfriend, Erica Martin, resulting in Greg's death. Due to the attacks, the North Koreans bombard the woods, killing Danny and Julie while the others flee. The Wolverines eventually encounter Marine Sergeant-Major Andrew Tanner and two other Marines, Smith and Hodges, who were looking for the Wolverines resistance group. They explain the current state of the war: Russia funded North Korea to detonate a new weapon called the massive electrical pulse to take out the power grids throughout the states, crippling the U.S. military in the homeland. Russia and North Korea invaded from both East and West to take key positions and attempted to launch a final offensive to take complete control of the country, but American counterattacks have halted their advances, leaving the area stretching from Michigan to Montana and Alabama to Arizona free from the enemy occupation and known as Free America. They also reveal that Captain Cho carries a suitcase containing an EMP-resistant radio to keep in contact with the occupying forces. The Marines' mission is to retrieve the suitcase so that the U.S. command can contact their remaining forces for a counteroffensive, but they need the Wolverines to help them, which they agree to do.

The Wolverines and the Marines locate a police station in Spokane where Captain Cho is stationed. Toni, Erica and Smith distract the main security forces while the rest raid the building for the suitcase. During the raid, Hodges is killed and Jed fights Cho in hand-to-hand combat and eventually kills him in retaliation for killing his father. After the successful raid, the Wolverines hide in their new hideout while Jed and Matt have a short conversation. Afterward, the Wolverines are suddenly attacked by Russian Spetznaz, resulting in Jed's death, but the Wolverines manage to escape with the suitcase. Before moving out to the extraction point, they learn that during the fight at the station, Daryl was stabbed with a knife which injected a tracking device into him which led the North Koreans and Russians to their location. Since the stab wound is too deep for the device to be cut out, Daryl decides to stay behind while the others flee, leaving his fate uncertain.

Tanner and Smith depart in a UH-1 while the Wolverines decide to stay and fight on. By raiding prison camps and detention centers, the Wolverines become the largest resistance group since World War II, with Matt now leading the group to continue to help repel the invasion.