ONLY THE POLICE AND THE MILITARY SHOULD HAVE GUNS 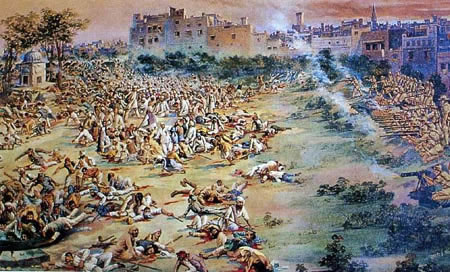 On Sunday 13 April 1919, Dyer was convinced of a major insurrection and thus he banned all meetings. On hearing that a meeting of 15,000 to 20,000 people including women, senior citizens and children had assembled at Jallianwala Bagh, Dyer went with fifty riflemen to a raised bank and ordered them to shoot at the crowd. Dyer kept the firing up till the ammunition supply was almost exhausted for about ten minutes with approximately 1,650 rounds fired.[1] Official Government of India sources estimated that the fatalities were 379, with 1,100 wounded. The casualty number estimated by Indian National Congress was more than 1,500, with approximately 1,000 dead.[2]

Dyer was removed from duty and forced to retire. He became a celebrated hero in Britain among people with connections to the British Raj.[3] The massacre caused a reevaluation of the Army's role in which the new policy became minimum force, and the Army was retrained and developed suitable tactics such as crowd control.[4] Historians considered the episode as a decisive step towards the end of British rule in India.[5]

On April 13, the traditional festival of Vaisakhi, thousands of Sikhs, Muslims and Hindus gathered in the Jallianwala Bagh (garden) near the Harmandir Sahib in Amritsar.

An hour after the meeting began as scheduled at 4:30 pm, Dyer arrived with a group of sixty-five Gurkha and twenty-five Baluchi soldiers into the Bagh. Fifty of them were armed with rifles. Dyer had also brought two armoured cars armed with machine guns; however, the vehicles were left outside, as they were unable to enter the Bagh through the narrow entrance. The Jallianwala Bagh was surrounded on all sides by houses and buildings and had few narrow entrances. Most of them were kept permanently locked. The main entrance was relatively wide, but was guarded by the troops backed by the armoured vehicles.

Dyer—without warning the crowd to disperse—blocked the main exits. He explained later that this act "was not to disperse the meeting but to punish the Indians for disobedience."[14] Dyer ordered his troops to begin shooting toward the densest sections of the crowd (including women and children). Firing continued for approximately ten minutes. Cease-fire was ordered only when ammunition supplies were almost exhausted, after approximately 1,650 rounds were spent.[1]

Many people died in stampedes at the narrow gates or by jumping into the solitary well on the compound to escape the shooting. A plaque in the monument at the site, set up after independence, says that 120 bodies were pulled out of the well. The wounded could not be moved from where they had fallen, as a curfew was declared; and many more died during the night.

The number of deaths caused by the shooting is disputed. While the official figure given by the British inquiry into the massacre is 379 deaths, the method used by the inquiry has been subject to criticism. In July 1919, three months after the massacre, officials were tasked with finding who had been killed by inviting inhabitants of the city to volunteer information about those who had died.[15] This information was incomplete due to fear that those who participated would be identified as having been present at the meeting, and some of the dead may not have had close relations in the area.[16] Additionally, a senior civil servant in the Punjab interviewed by the members of the committee admitted that the actual figure could be higher.[17]

Since the official figures were probably flawed regarding the size of the crowd (15,000–20,000), the number of rounds shot and the period of shooting, the politically interested Indian National Congress instituted a separate inquiry of its own, with conclusions that differed considerably from the Government's inquiry. The casualty number quoted by the Congress was more than 1,500, with approximately 1,000 being killed.[18] The Government tried to suppress information of the massacre, but news spread in India and widespread outrage ensued. Yet, the details of the massacre did not become known in Britain until December 1919. 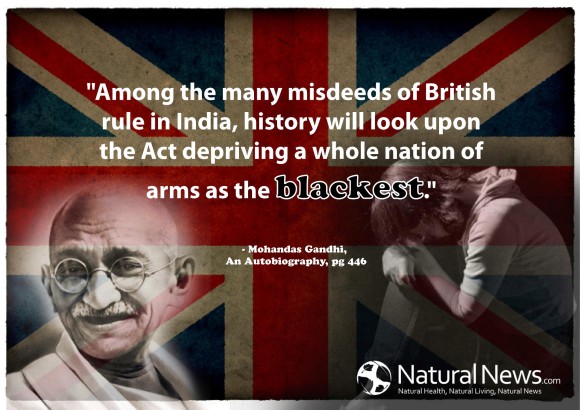 This image had Facebook suspend Natural News' account. It is the truth. Gandhi made statements on same. Facebook is a CIA trolling operation. Facebook does NOT believe in Free Speech. As a corporation of the military industrial complex, it is designed to destroy you. They SPIT on Freedom of Speech. To HELL with the TRAITORS at Facebook.