CONSPIRACY NIGHT AT THE MOVIES: The Scarlet and the Black

The swines pulled it. We have a new link: 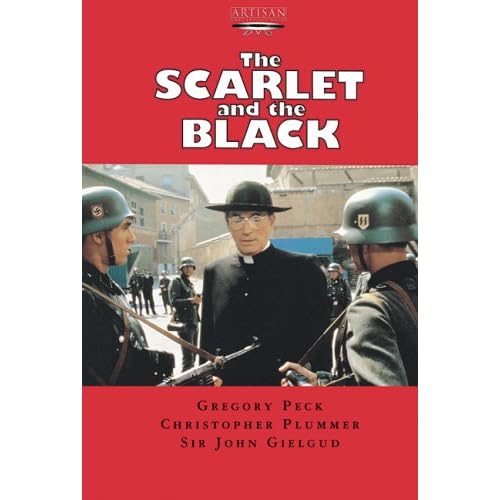 The Scarlet and the Black is a 1983 made for TV movie starring Gregory Peck and Christopher Plummer. Based on J. P. Gallagher's book The Scarlet Pimpernel of the Vatican (published in 1967), this movie tells the story of Monsignor Hugh O'Flaherty, a real life Irish Catholic priest who saved thousands of Jews and Allied POWs in Nazi-occupied Rome.

The movie title The Scarlet and the Black is a reference not only to the black cassock and scarlet sash worn by Monsignors and Bishops in the Catholic Church, but also to the dominant colors of Nazi Party regalia.

In 1943, Nazi Germany completely occupies Rome. The Pope (John Gielgud) is approached by General Max Helm and SS Head of Police for Rome Colonel Herbert Kappler (Christopher Plummer). The Colonel expresses concern that escaped Allied prisoners may attempt to seek refuge in the Vatican, and requests permission to paint a white line across St. Peter's Square in order to mark the extent of Vatican sovereignty. The Pope grants his permission, but upon the departure of the SS officers looks out the window to see the white line had already begun being painted.

Kappler's main rival is Monsignor O'Flaherty (Gregory Peck), an Irish clergyman who runs an underground organization which provides safe haven and eventual escape to Jews, escaped PoWs, and refugees in Nazi-occupied Rome. He is assisted in this enterprise by several other patriots such as Ms. Francesca Lombardo and other local Romans, including clergy.

Kappler attempts to end their activities and destroy the group, but is increasingly frustrated by O'Flaherty's repeated successes, due to a combination of his clever plans, numerous disguises, and stressing the very limits of international law. Met with continuous failure, Kappler begins to develop a personal vendetta against O'Flaherty.

Despite O'Flaherty's efforts, Kappler manages to recapture many escaped PoWs, deport many Jews to death camps, and exploit and oppress the general population; a number of O'Flaherty's friends are also arrested or killed.

As the war progresses, the Allies succeed in landing in Italy and begin to overcome German resistance, eventually breaking through and heading towards Rome itself.

Kappler worries for his family's safety from vengeful partisans, and, in a one-to-one meeting with O'Flaherty, asks him to save his family, appealing to the same values that motivated O'Flaherty to save so many others.

The Monsignor, however, refuses, disbelieving that after all the Colonel has done and all the atrocities he is responsible for, he would expect mercy and forgiveness automatically, simply because he asked for it, and departs in disgust.

As the Allies enter Rome, Monsignor O'Flaherty joins in the celebrations of the liberation, and somberly toasts those who did not live to see it.

Kappler is eventually captured and questioned by the Allies. In the course of his interrogation, he is informed that his wife and children were smuggled out of Italy and escaped unharmed into Switzerland. Upon being asked who helped them, Kappler realizes that it must be O'Flaherty, but responds simply that he does not know.

The film epilogue states that Kappler was sentenced to life imprisonment, but was frequently visited in prison by O'Flaherty, eventually becoming a Catholic and being baptized at his hands in 1959.

The character of General Max Helm was based entirely on the real life of SS-Obergruppenführer Karl Wolff, who served in 1944 as the Supreme SS and Police Leader of Italy. The film was unable to use Wolff's real name, since the SS General was still living in 1981; he died in 1984.

Herbert Kappler was sentenced to life imprisonment, and did convert to Catholicism after several years, partly under the influence of his war-time opponent Hugh O'Flaherty, who often visited Kappler in prison, discussing religion and literature with him. He was eventually transferred to a prison hospital on account of poor health. It was there that he escaped imprisonment by being smuggled out in a suitcase by his wife (Kappler weighed less than 105 pounds at the time). He escaped to West Germany, where he eventually died at age 70 in 1978.