CONSPIRACY NIGHT AT THE MOVIES: 7 Days in May: The film the Pentagon did not want made! FULL MOVIE 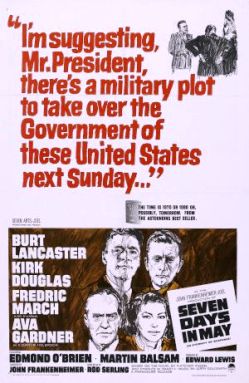 Seven Days in May; U.S. military leaders plot to overthrow the President because he supports a nuclear disarmament treaty and they use fear of a 'Soviet sneak attack' to implement their 'standing' plot for complete overthrow of the U.S. government.

The book was written in late 1961 and into early 1962, during the first year of the Kennedy administration, reflecting some of the events of that era. In November 1961, President John F. Kennedy accepted the resignation of vociferously anti-Communist General Edwin Walker who was indoctrinating the troops under his command with personal political opinions and had described former President Harry S. Truman, former United States Secretary of State Dean Acheson, former First Lady Eleanor Roosevelt and other recent still-active public figures as Communist sympathizers. Although no longer in uniform, Walker continued to be in the news as he attempted to run for Governor of Texas and made speeches promoting strongly right-wing views. In the film version of Seven Days in May, Fredric March, portraying the narrative's fictional President Jordan Lyman, mentions General Walker as one of the "false prophets" who were offering themselves to the public as leaders. (Accused John F. Kennedy assassin Lee Harvey Oswald purportedly fired rifle shots into the home of General Walker in April 1963.) 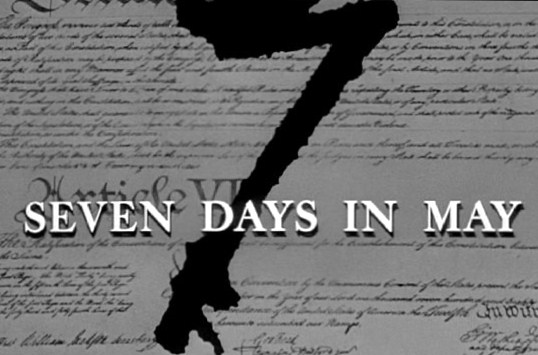 As they collaborated on the novel, Knebel and Bailey, who were primarily political journalists and columnists, also conducted interviews with another controversial military commander, the newly appointed Air Force Chief of Staff, Curtis LeMay, an advocate of preventive first-strike nuclear option. 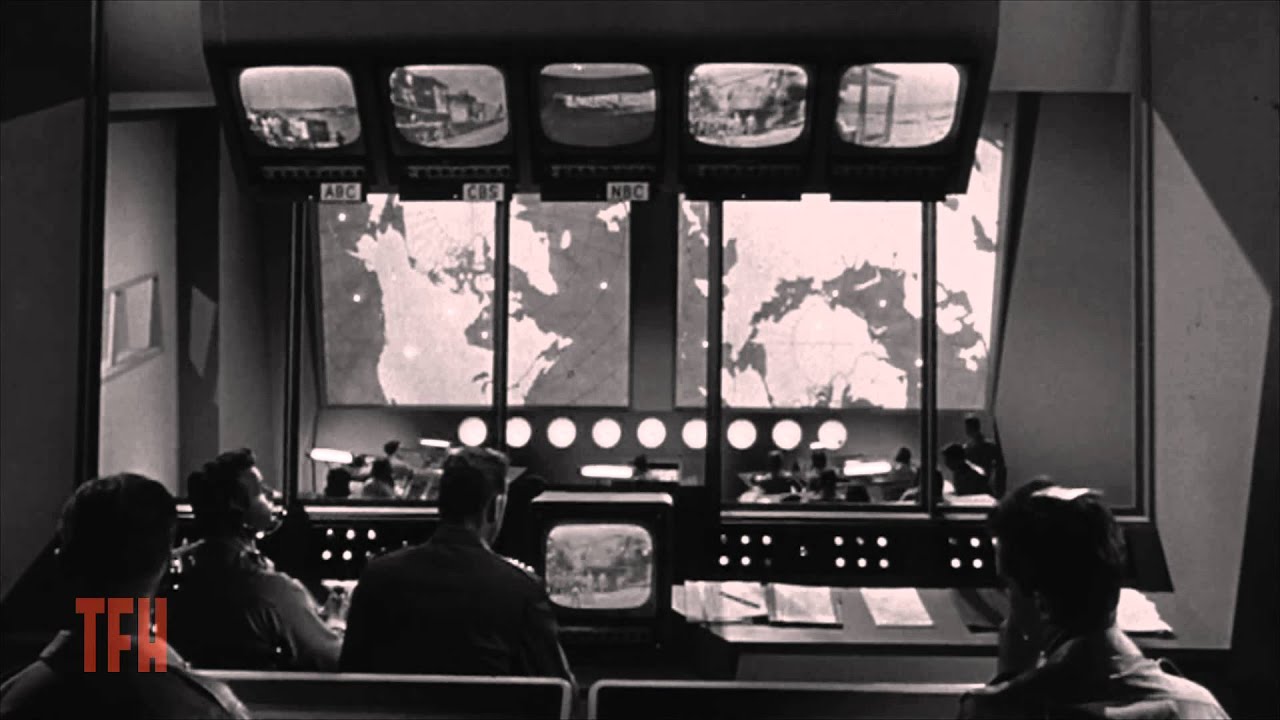 President Kennedy had read Seven Days in May shortly after its publication and believed the scenario as described could actually occur in the United States. According to Frankenheimer in his director's commentary, production of the film received encouragement and assistance from Kennedy through White House Press Secretary Pierre Salinger, who conveyed to Frankenheimer Kennedy's wish that the film be produced and that, although the Pentagon did not want the film made, the President would conveniently arrange to visit Hyannis Port for a weekend when the film needed to shoot outside the White House.

The story is set in the early 1970s, ten years in the future at the time of the film's 1964 release, and the Cold War is still a problem (in the 1962 book, the setting was May 1974). U.S. President Jordan Lyman has recently signed a nuclear disarmament treaty with the Soviet Union, and the subsequent ratification has produced a wave of public dissatisfaction, especially among the President's opposition and the military, who believe the Soviets cannot be trusted.

As the debate rages, a Pentagon insider, United States Marine Corps Colonel Martin "Jiggs" Casey (the Director of the Joint Staff), becomes suspicious of behavior among the Joint Chiefs of Staff and comes to a shocking conclusion: the Joint Chiefs, led by the charismatic Air Force General James Mattoon Scott, intend to stage a coup d'etat to remove President Lyman and his cabinet in seven days. According to the plan, an undisclosed Army combat unit known as ECOMCON (Emergency COMmunications CONtrol) will seize control of the country's telephone, radio, and television networks, while Congress is prevented from implementing the treaty. Casey makes the pretense of a social visit to General Scott's former mistress, the vulnerable Ellie Holbrook, in New York City to ferret out potential secrets that can be used against him. The aging, alcoholic Clark is sent to El Paso, Texas, to locate the supposed "Site Y" military base, while Girard leaves for the Mediterranean to obtain a written confession from Vice Admiral Farley C. Barnswell, who is known to have declined participation in the coup. Girard gets the written confession, but is killed when his flight crashes into a mountain in Spain, while Senator Clark is taken captive by conspirator Colonel Broderick upon finding the secret base and is held incommunicado. The senator convinces Colonel Mutt Henderson, the base's deputy commander and nonparticipant in the coup, to help him escape. They succeed, though when Clark makes a call to the President, Henderson is arrested by Scott's men. 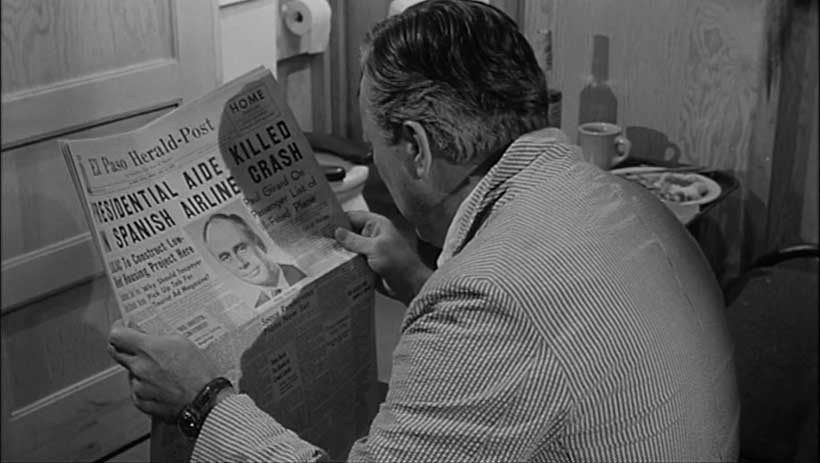 A showdown with Scott is scheduled in the Oval Office, with the President confronting him and demanding his resignation and that of all Joint Chiefs involved in the plot. Scott initially denies any guilt, claiming that the President had verbally approved the secret base in Texas, before freely challenging the treaty, arguing it would weaken the U.S. and lead to an attack by the Soviets. Lyman counters with the suggestion that a military coup could result in a preemptive strike by Moscow. Scott is unmoved, stating that he feels the American people are behind him and his position. Lyman considers using the blackmail letters, but decides against it, and allows Scott to leave.

Shortly thereafter, Scott briefs the other three members of the Joint Chiefs, demanding they stay in line and reminding them that the president does not seem to have the evidence they would need for charging them with treason. Somewhat reassured, the others agree to stick to the plan to appear on all television and radio networks simultaneously on Sunday to denounce the President. However, Lyman first holds a press conference where he demands the resignation of Scott and all members of the Joint Chiefs of Staff, interrupted only by an attaché from the U.S. Embassy in Spain bringing Barnswell's handwritten confession, recovered from the plane crash. A copy is given to Scott and the other officers in on the plot, who have no choice but to resign and call off the coup. The ending has Lyman addressing the American people on the country's future.