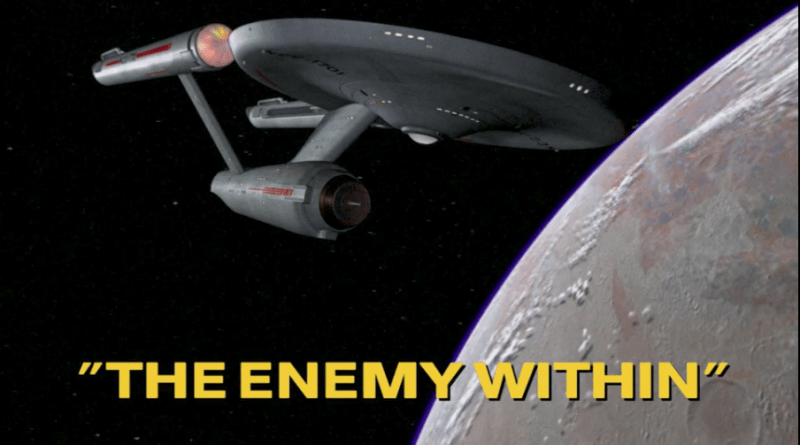 For English click on the small head. It's the second option.

Star Trek is an American science-fiction television series created by Gene Roddenberry that follows the adventures of the starship USS Enterprise (NCC-1701) and its crew. It later acquired the retronym of Star Trek: The Original Series (TOS) to distinguish the show within the media franchise that it began.

Space: the final frontier. These are the voyages of the starship Enterprise. Its five-year mission: to explore strange new worlds, to seek out new life and new civilizations, to boldly go where no man has gone before.

"The Enemy Within" is the fifth episode of the first season of the American science fiction television series, Star Trek. Written by Richard Matheson and directed by Leo Penn, it first aired on October 6, 1966.

In the episode, while beaming up from planet Alpha 177 a transporter malfunction causes Captain Kirk to be split into two people, one "good," but indecisive and ineffectual; the other "evil," impulsive and irrational.

The USS Enterprise is on a geological exploration of the planet Alpha 177. Geological Technician Fisher is injured after a fall and transported aboard Enterprise, though Chief Engineer Scott has some trouble with the transporter. The transporter equipment appears to be fine but he notices some magnetic dust from ore samples covering Fisher's uniform that may have interfered with the transport. 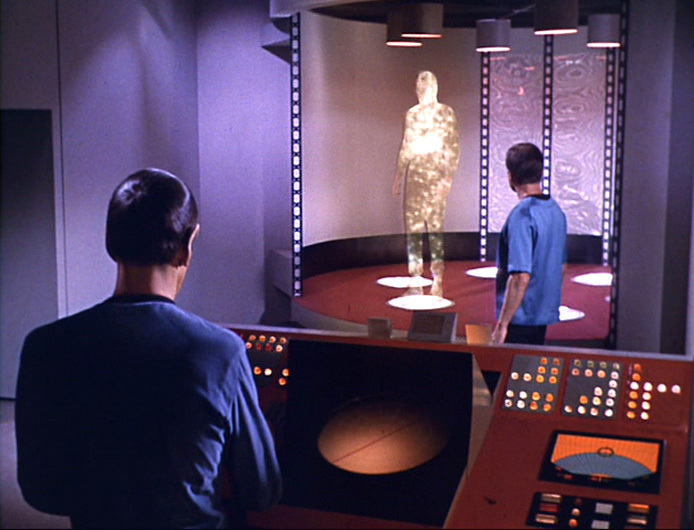 Captain Kirk transports back to the ship. The transporter appears to work correctly, but Kirk experiences some disorientation, and Scott escorts Kirk out of the transporter room. While unsupervised, the transporter activates a second time, materializing a second version of Kirk which behaves more maliciously than his counterpart. This "evil" Kirk begins to wander the ship, and those he encounters are confused by his behavior.

Scott assists in beaming a dog-like animal specimen from the planet, but two identical creatures materialize – one completely docile and the other vicious. Scott surmises that the ore dust has caused the transporter to split the personalities of those they beamed up, creating good and evil counterparts. Scott reports this to Mr. Spock and then orders the transporter taken out of service to investigate, stranding the landing party on the planet as the bitterly cold night sets in. Elsewhere on the ship, the "good" Kirk begins to feel uncertain, and struggles to make decisions. The "evil" Kirk, in a drunken state, sexually assaults Yeoman Janice Rand in her quarters. She scratches his face with her fingernails. When Fisher witnesses this and calls security, the "evil" Kirk attacks and knocks him out. Rand reports the incident to the bridge. The "good" Kirk orders the crew to capture the "evil" Kirk, but at Spock's advice he keeps the fact that their quarry is his evil half a secret so as not to weaken the crew's faith in him; the crew are instead told of an imposter recognizable by the scratches on his cheek. 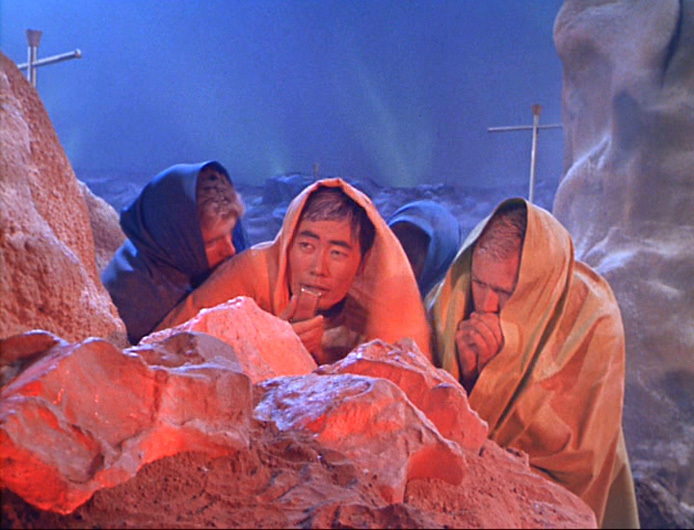 The "evil" Kirk hears this announcement and uses makeup to mask his injury. He secures a phaser from a security officer, before going into hiding in engineering. Putting himself in his shoes, the "good" Kirk anticipates this move. While the two Kirks scuffle, Spock disables the "evil" Kirk with a Vulcan nerve pinch. Spock and McCoy recognize that both Kirks are mentally deteriorating, and they must find a way to reverse the transporter accident to save them, as well as the landing party. Spock and Scott use power from the ship's impulse drive to reverse the transporter on the dog-like specimen. When it materializes, the creature is whole but dead. Spock suggests that it died because its animal brain could not handle the stress of its two halves being reintegrated, so Kirk will be able to survive the same procedure, while Dr. Leonard McCoy insists they can't take the risk that the death was caused by ongoing transporter malfunction. 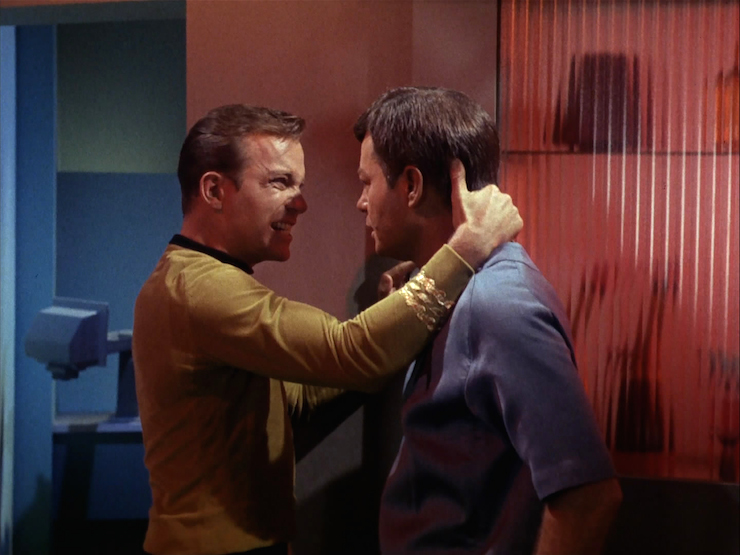 With the landing party nearly dead from hypothermia, the "good" Kirk opts to gamble on the procedure rather than wait for an autopsy on the creature. When he releases the "evil" Kirk, his other self overpowers him, and gives him facial scratches like his own. Pretending to be the "good" Kirk, he tells Rand the truth about the "imposter", and makes a date with her before heading to the bridge. He orders the crew to leave orbit, telling the navigator that the landing party cannot be saved. The "good" Kirk and McCoy race to the bridge, where the two Kirks face off. The "good" Kirk at last persuades the "evil" Kirk that they need each other to survive, and will both live on as parts of each other. He orders Scott to attempt the reversal process, and Kirk rejoined as one being. With his sense of command and good will restored (and the transporter repaired), Kirk orders the landing party beamed up. They are safe despite the cold. Rand tells Kirk about her last encounter with "evil" Kirk, but he cuts her off before she can discuss the issue of his romantic overtures.