Radio host Brent Johnson of The Global Freedom Report joins in today's show to discuss the psychology of freedom. Johnson is regarded as the #1 expert on sovereignty in the world. He has had one of the most successful broadcasts for more than 25 years, teaching listeners workable methods of protecting their assets, and showing them how to live free from the endless stream of government regulations.

A brilliant dissertation on the state of affairs between government and the people. Are we sovereign? NO! We ceded our rights away for the promise of security.

What causes the revolution? That's why bread and circuses were the control grid for Rome. 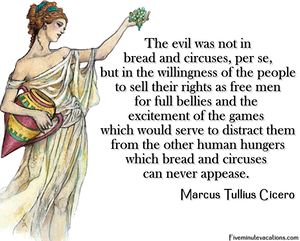 "The evil was not in the bread and circuses, per se, but in the willingness of the people to sell their rights as free men for full bellies and the excitement of the games which would serve to distract them from the other human hungers which bread and circuses can never appease."

“The real destroyers of the liberties of the people is he who spreads among them bounties, donations, and benefits.” –Plutarch

This was the sin of Sodom.

"Behold, this was the iniquity of thy sister Sodom, pride, fulness of bread, and abundance of idleness was in her and in her daughters, neither did she strengthen the hand of the poor and needy." (Ezekiel 16:49)

Food riots may occur when there is a shortage and/or unequal distribution of food. Causes can be food price rises, harvest failures, incompetent food storage, transport problems, food speculation, hoarding, poisoning of food, or attacks by pests. Hence, the pathway between food related issues such as crop failure, price hike or volatility and an actual “riot” is often complex.

Some argue that volatile and high food price are just part of a “perfect storm” combining with climate change, population growth, resource scarcity, and urbanization leading to social unrest. When the public becomes too desperate in such conditions, they may attack shops, farms, homes, or government buildings to attain bread or other staple foods such as grain or salt, as in the 1977 Egyptian bread riots. Often, it is more than an issue of hunger and the need to obtain bread for immediate caloric satisfaction; food riots are part of a larger social movement, such as the Russian revolution or the French revolution. Thus in places with low political freedom there is an increased likelihood for social unrest when food prices are volatile or suddenly rise. Historically, women have been heavily involved in leading food riots; food riots have thus served as a form of female political action even in societies without women's suffrage or other guaranteed political rights.