They say all is fair in love and war. I say the race goes to the swift, and the world moves at the speed of the predator not the prey. We have to catch up to the ultimate predator, Hillary Clinton and the DNC, rigging the vote and setting up a state sponsored global crime ring that will lead to WW3. 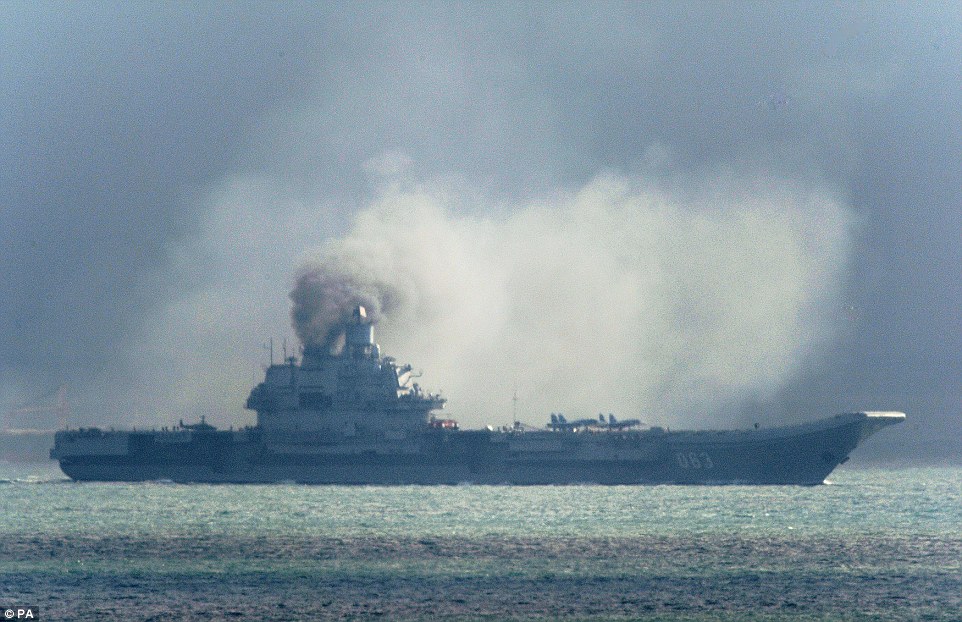 The Admiral Kuznetsov, pictured this morning, pumped out toxic black smoke from its diesel engines as it passed Dover

Those engines are in rough shape. She looks a like a coal burner.

The internet in the U.S. took a direct hit and goes off line for part of the day. Was it the Russians? Hardly. I suspect the hacker community are responding to Assange being taken 'off line.' We cannot rule out the false flag either to justify American cyberwar against Russia. Obama weighs military action in Syria. The great Russian fleet sails to the Mediterranean passing the Cliffs of Dover. Live fire drills occur off the Scottish coast. A Russian ballistic missile sub is photographed with the hatch OPEN! A warning to the satellite. We're armed and ready. British general warns we are at war already. It means extinction for the human race. Russian research ship hacking internet cable to Syria. The Russian fleet. Obama wagging the dog for cover up. Why is Obama going to war? NATO officers shot down over Ukraine. Interdiction in Alaska. Action at air bases in the U.S. and Canada. Grid collapse executive order. Russia's microwave weapons. Global war anticipated over Syria. Russia prepares for war. Russia's war plan. Russian buildup in The Ukraine. NATO mercs and U.S. snipers enter the fray. AWACS. Rebel commander killed. Ukrainian fascists march. Baltic states and Poland fear NATO paper tiger. Where are the peace activists? UK shuts off RT's accounts. No fly zone gives ground to ISIS means war. The battle for Mosul is the back door to Raqqa. ISIS redefines the Mahdi. U.S. UK reject Russian pause. They got a new drug. Philippines courts Russia China alliance. Kidnappings in Libya. Canada to make war for peace in Africa. Isn't that Orwellian? Cell towers to jam missiles.

The great debate. Malik Obama sits with Trump. Democrats say democracy. America is a Republic where are all under the rule. See the difference. Gun control, abortion and loading the Supreme court on the agenda. Hillary's E-Mails. Election rigging expose blocked by lame stream. Clinton Foundation 'accounts.' Is Hillary a child rapist who loves mutilation. The plutonium. The deceased covergirl. Will Trump accept the results? Assange missing in action. Conspiracy man found dead. Former Alberta premier killed in plane crash. Words mother and father to be banned in Orwell's Ontario. Drowning in debt. Quantum communication. Tasmanian devil's milk is the cure for drug resistant bacteria. On Conspiracy Cafe Election Rigging could be the cause for war.

19 For when our ancestors were being led captive to Persia, the pious priests of that time took some of the fire of the altar and secretly hid it in the hollow of a dry cistern, where they took such precautions that the place was unknown to anyone.

20 But after many years had passed, when it pleased God, Nehemiah, having been commissioned by the king of Persia, sent the descendants of the priests who had hidden the fire to get it. And when they reported to us that they had not found fire but only a thick liquid, he ordered them to dip it out and bring it.

21 When the materials for the sacrifices were presented, Nehemiah ordered the priests to sprinkle the liquid on the wood and on the things laid upon it.

22 When this had been done and some time had passed, and when the sun, which had been clouded over, shone out, a great fire blazed up, so that all marveled.

23 And while the sacrifice was being consumed, the priests offered prayer—the priests and everyone. Jonathan led, and the rest responded, as did Nehemiah.

24 The prayer was to this effect: "O Lord, Lord God, Creator of all things, you are awe-inspiring and strong and just and merciful, you alone are king and are kind,

25 you alone are bountiful, you alone are just and almighty and eternal. You rescue Israel from every evil; you chose the ancestors and consecrated them.

26 Accept this sacrifice on behalf of all your people Israel and preserve your portion and make it holy.

28 Punish those who oppress and are insolent with pride.

29 Plant your people in your holy place, as Moses promised."

30 Then the priests sang the hymns.

31 After the materials of the sacrifice had been consumed, Nehemiah ordered that the liquid that was left should be poured on large stones.

32 When this was done, a flame blazed up; but when the light from the altar shone back, it went out.

33 When this matter became known, and it was reported to the king of the Persians that, in the place where the exiled priests had hidden the fire, the liquid had appeared with which Nehemiah and his associates had burned the materials of the sacrifice,

34 the king investigated the matter, and enclosed the place and made it sacred.

35 And with those persons whom the king favored he exchanged many excellent gifts.

36 Nehemiah and his associates called this "nephthar," which means purification, but by most people it is called naphtha.