Why we openly accepted the right to bear arms is easily understood by those who lived through it. It was called The Inquisition. People were routinely arrested without charge and held in secret, tortured and made to confess and then burned slowly at the stake. That all stopped with the invention of reliable firearms commonly held. The gun banners seem to approve rendition, torture and secret trials. Sounds like a return to the 'good' old days for them.

Influence of the English Bill of Rights of 1689

The right to have arms in English history is believed to have been regarded as a long-established natural right in English law, auxiliary to the natural and legally defensible rights to life. The English Bill of Rights emerged from a tempestuous period in English politics during which two issues were major sources of conflict: the authority of the King to govern without the consent of Parliament and the role of Catholics in a country that was becoming ever more Protestant. Ultimately, the Catholic James II was overthrown in the Glorious Revolution, and his successors, the Protestants William III and Mary II, accepted the conditions that were codified in the Bill. One of the issues the Bill resolved was the authority of the King to disarm its subjects, after James II had attempted to disarm many Protestants, and had argued with Parliament over his desire to maintain a standing (or permanent) army. The bill states that it is acting to restore "ancient rights" trampled upon by James II, though some have argued that the English Bill of Rights created a new right to have arms which developed out of a duty to have arms. In District of Columbia v. Heller (2008), the Supreme Court did not accept this view, remarking that the English right at the time of the passing of the English Bill of Rights was "clearly an individual right, having nothing whatsoever to do with service in the militia" and that it was a right not to be disarmed by the crown and was not the granting of a new right to have arms.

The text of the English Bill of Rights of 1689 includes language protecting the right of Protestants against disarmament by the Crown. This document states: "That the Subjects which are Protestants may have Arms for their Defence suitable to their Conditions and as allowed by Law." It also contained text that aspired to bind future Parliaments, though under English Constitutional Law no Parliament can bind any later Parliament. Nevertheless, the English Bill of Rights remains an important constitutional document, more for enumerating the rights of Parliament over the monarchy than for its clause concerning a right to have arms.

Whereas the late King James the Second by the Assistance of diverse evill Councellors Judges and Ministers imployed by him did endeavour to subvert and extirpate the Protestant Religion and the Lawes and Liberties of this Kingdome (list of grievances including) ... by causing severall good Subjects being Protestants to be disarmed at the same time when Papists were both Armed and Imployed contrary to Law, (Recital regarding the change of monarch) ... thereupon the said Lords Spirituall and Temporall and Commons pursuant to their respective Letters and Elections being now assembled in a full and free Representative of this Nation takeing into their most serious Consideration the best meanes for attaining the Ends aforesaid Doe in the first place (as their Auncestors in like Case have usually done) for the Vindicating and Asserting their ancient Rights and Liberties, Declare (list of rights including) ... That the Subjects which are Protestants may have Arms for their Defence suitable to their Conditions and as allowed by Law.

The historical link between the English Bill of Rights and the Second Amendment, which both codify an existing right and do not create a new one, has been acknowledged by the U.S. Supreme Court.

The English Bill of Rights includes the proviso that arms must be as "allowed by law." This has been the case before and after the passage of the Bill. While it did not override earlier restrictions on the ownership of guns for hunting, it was written to preserve the hunting rights of the landed aristocracy and is subject to the parliamentary right to implicitly or explicitly repeal earlier enactments. There is some difference of opinion as to how revolutionary the events of 1688-89 actually were, and several commentators make the point that the provisions of the English Bill of Rights did not represent new laws, but rather stated existing rights. Mark Thompson wrote that, apart from determining the succession, the English Bill of Rights did "little more than set forth certain points of existing laws and simply secured to Englishmen the rights of which they were already posessed [sic]." Before and after the English Bill of Rights, the government could always disarm any individual or class of individuals it considered dangerous to the peace of the realm. In 1765, William Blackstone wrote the Commentaries on the Laws of England describing the right to have arms in England during the 18th century as a natural right of the subject that was "also declared" in the English Bill of Rights.

The fifth and last auxiliary right of the subject, that I shall at present mention, is that of having arms for their defence, suitable to their condition and degree, and such as are allowed by law. Which is also declared by the same statute I W. & M. st.2. c.2. and is indeed a public allowance, under due restrictions, of the natural right of resistance and self-preservation, when the sanctions of society and laws are found insufficient to restrain the violence of oppression. 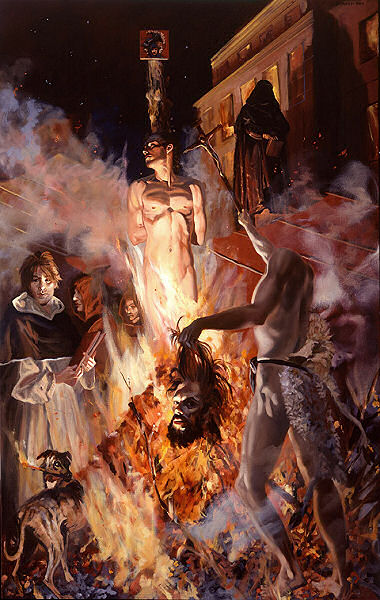 Although there is little doubt that the writers of the Second Amendment were heavily influenced by the English Bill of Rights, it is a matter of interpretation as to whether they were intent on preserving the right to regulate arms to the states over the federal government (as the English Parliament had reserved for itself against the monarch) or whether it was intent on creating a new right akin to the right of others written into the Constitution (as the Supreme Court recently decided). Some in the U.S. have preferred the "rights" argument arguing that the English Bill of Rights had granted a right. The need to have arms for self-defence was not really in question. Peoples all around the world since time immemorial had armed themselves for the protection of themselves and others, and as organized nations began to appear these arrangements had been extended to the protection of the state. Without a regular army and police force (which in England was not established until 1829), it had been the duty of certain men to keep watch and ward at night and to confront and capture suspicious persons. Every subject had an obligation to protect the king's peace and assist in the suppression of riots.