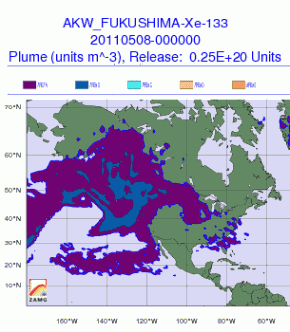 New forecasts show a very predominate cloud of radiation that seems to blanket most of the United states in the next few days. Looking at the map you can see that the brunt of this cloud will hit the Western United States as well as Canada very hard. With steady winds flowing from japan and heading east ,we will continue to see this happen. As mentioned in other articles, food supplies have already seen reports of low levels of Radiation being tested, and with these new massive fallout clouds heading east I’m sure these levels will increase.

As you will read below, this map was never intended for everyday citizens to find. Thanks to Alexander for his hard work at digging this up!

“While playing around with the URL’s for Japan nuclear iodine forecasts I discovered a nuclear radiation forecast that was accidentally placed on the ZAMG website. The scientists inadvertently uploaded a radiation forecast showing a massive cloud of Fukushima Xenon radiation spreading over Japan and the United States instead of the iodine forecast for May 9, 2011. Being inquisitive, I “hacked” the URL and tried getting the May 9th forecast.

Much to my surprise the file “20110508_I-131_FUKU.gif” didn’t pull up i-131 dispersion plume. Instead it pulled the WORLD XENON radiation plume projection and it looks bad.” says Alexander.

UPDATE: Apparently they have realized the error and the url now points to the correct iodine forecast. www.zamg.ac.at/pict/wetter/sonderwetter/fuku/20110508_I-131_FUKU.gif.