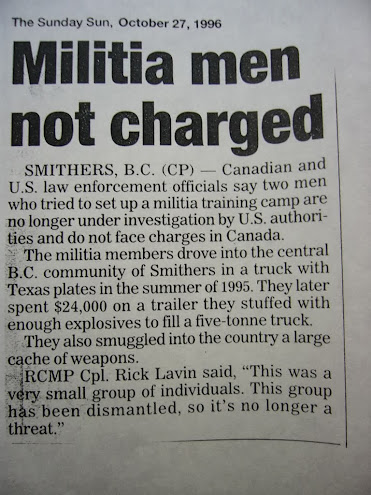 Back in 1996 a group of crazed right wing militiamen were arrested in a British Columbia trailer park with 2 tonnes of explosives and fully automatic weapons. A savvy Mountie stopped the ultimate in pending terror. What happened to the crazed right wing whackos? Nothing. They were released without charge after consultation with U.S. Justice Dept. officials. In law there can only be a few reasons for that. They were U.S. military, intelligence or police in Canada with the permission of the government or they had diplomatic passports. Either way that was a major false flag blowing in the wind. No Canadian politician looked into the matter. I wrote many of them including Preston Manning the rising star of the Reform Party. The Department of Homeland Security rests with us. When we see it going down do whatever you can to shut it down.