Important victory for the Russians in Donbass as after the capture of Pavlovka they entered the center of the city in the strategic Marinka (or Maryinka). The Russians managed to crush the Ukrainian defenses after three months of heavy fighting.

Russians control 2/3 of the city with Ukrainian forces retreating towards Novomykhaylivka which will be the next target for Russian forces.

This is a serious development that will affect the fighting in Donbass and the combativeness of the Ukrainian Army as Maryinka is a key point in the south of the fortified defense line of the armed forces of Ukraine.

The city is almost completely destroyed. The Ukrainians had created a whole system of branches and trenches.

For example, the length of one of the trenches is about 1.5 kilometers, which has numerous branches, connecting 20 residential zones into a single defensive line.

The 100th Brigade of the Donetsk People's Militia and the 107th Battalion are operating in the area.

Motorized units of the Russian Armed Forces entered the city center and took control of key facilities along Druzhby Avenue.

In the southern suburbs of the city, Ukrainians control positions in the area of ​​the hospital.

The district administration building, the House of Culture and the Temple of the Kazan Mother of God are not controlled by any side.

The fighting now continues in the complex of administrative buildings (courthouse, church, etc.) which are of critical importance for the total occupation of Maryinka.

Su-25 close support aircraft are bombing the northwestern suburbs of the city. For the first time since the start of the war, there are videos of Su-25 bombing with C-25 large-caliber unguided rockets 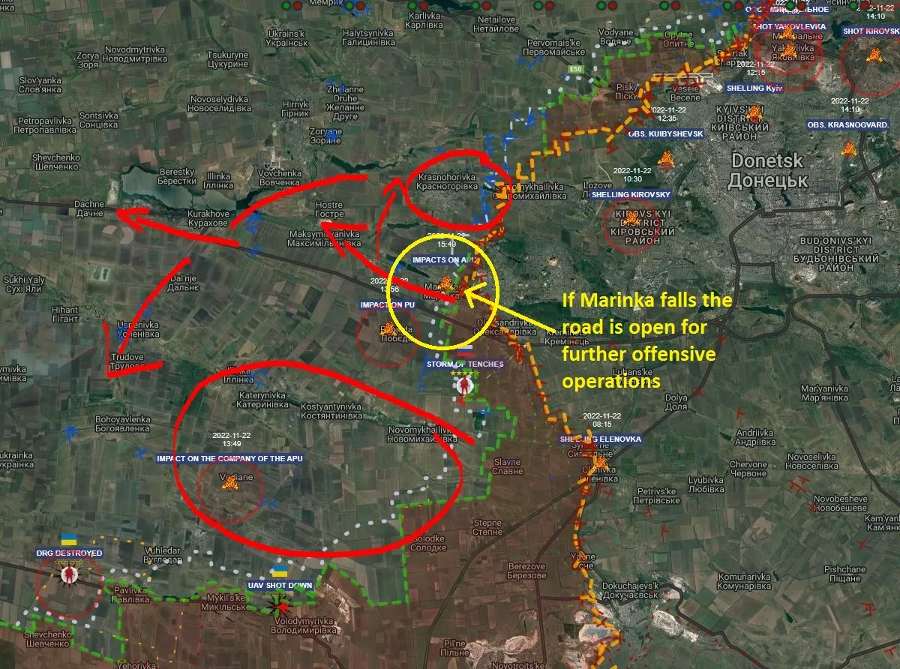