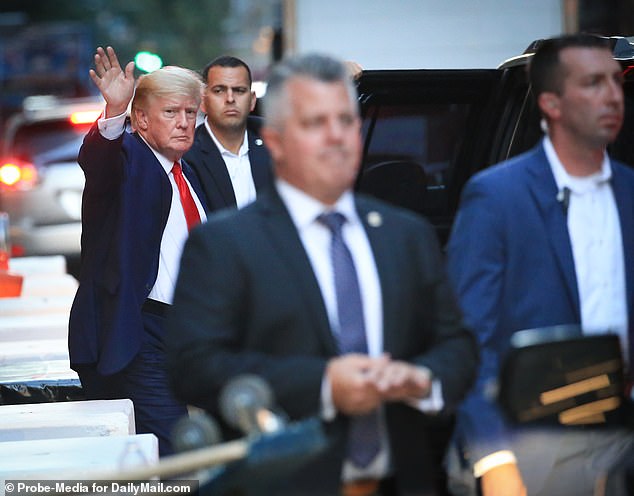 'These are dark times for our Nation, as my beautiful home, Mar-A-Lago in Palm Beach, Florida, is currently under siege, raided, and occupied by a large group of FBI agents,' he said in shocking statement

In January, the National Archives removed 15 boxes from Mar-a-Lago that they said Trump should not have taken with him from the White House

The boxes reportedly included classifed information, which the DoJ was probing

Donald Trump was spotted leaving Trump Tower in New York on Monday night after announcing his Mar-a-Lago home had been raided by the FBI, reportedly as part of an investigation into whether the former president took classified documents with him when he left the White House.

He waved and gave his signature thumbs' up to the gathered, but didn't comment on the investigation as he got into his SUV, surrounded by Secret Service agents.

Trump, in his dramatic announcement of the raid, didn't say specifically what the federal agents were looking for, just that his Florida home was 'under siege, raided, and occupied by a large group of FBI agents.'

But the investigation is focused on material that Trump brought with him to Mar-a-Lago after he left the White House, the New York Times reported, specificially if he has classified information in his private possession, which would be a violation of federal law.

Trump took 15 boxes of material with him in January 2021 after he left Washington D.C. The boxes were returned to the National Archives a year later in January 2022 but agents on Monday were looking to see if Trump had additional presidential records or any classified documents at his South Florida estate, the AP reported.

The search focused on the area of the club where Trump's offices and personal quarters are, CNN reported, noting Trump's personal attorney Christinia Bobb was present during the search.

And, during a meeting at Mar-a-Lago earlier this year, Trump's attorney showed federal investigators documents that were being kept on site, including some that were marked classified, the network noted.

Eric Trump, who was also spotted at Trump Tower on Monday, said he was the one that got the call on the raid and told his father about it.

'I was the guy who got the call this morning and I called my father and let him know it happened, and I was involved all day,' he told Fox News host Sean Hannity. 'Welcome to politics in the 2020s.'

'To have 30 FBI agents -- actually more than that -- descend on Mar-a-Lago, give absolutely, you know, no notice, go through the gates, start ransacking an office, ransacking a closet -- you know, they broke into a safe. He didn't even have anything in the safe. I mean, give me a break.'

He charged President Joe Biden's White House as the force behind the raid.