WAS WALMART COMPROMISED INTO CORONA HOAX AFTER EVIDENCE OF THEIR OPIOID PILL MILL DRUG RING? 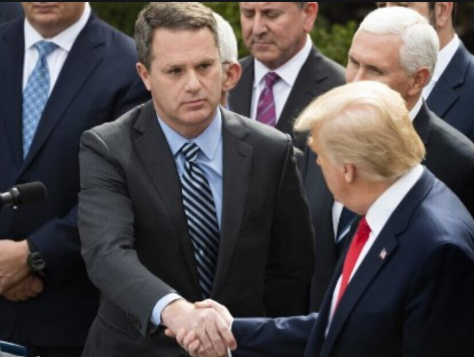 The U.S. Prosecutor's Office of the Eastern District of Texas (EDTX) has always been known for their special investigative skills of uncovering major drug lords. In fact –they have been one of the leading U.S. Attorney’s office in the nation to carry out President Trump’s “Initiative to Stop Opioid Abuse” focusing their resources on the illegal prescribing and dispensing Opioid drugs by pharmacies and doctors. Their strategies focused on cracking down on the domestic and international drug supply chains.

In 2018, Joe Brown, the U.S. attorney for EDTX, set an example of outstanding investigative work when they extradited defendants out of Colombia for major drug related crimes. In 2019, Brown’s office ranked fourth in the nation in the number of experienced and sophisticated indicted organized crime cases pursuant to the Justice Department’s Organized Crime Drug Enforcement Task Forces (OCDETF) program. This was until they began investigating the shady Opioid practices of Walmart.

After a two year investigation, in the fall of 2018, federal prosecutors were prepared to present “highly damaging evidence” in Walmart’s Opioid dispensing practices and their deep involvement in being an Opioid pill-mill pipeline. However, Trump's top appointees at the DOJ instantly suppressed the evidence and killed the case, leaving Walmart to play the “victim role” and get away with continuing their dirty pipeline between their pharmacies and the nation's drug-dealing pill-mill murdering doctors.

But, why would they want to suppress the discovery of Walmart as one of the major players in illegal dispensing of the Opioid drug by their pharmacies across the nation? After all, the exponential increase in Opioid overdoses in the nation was the major reason for Trump’s Opioid Initiative.

It was discovered between 2014-2017, that over 1.3 Million doses were illegally dispensed by Walmart pharmacists from just one “pill-mill” doctor alone. After a two year investigation, the prosecution team, led by Joe Brown and Heather Rattan, who focused her career in prosecuting members of the drug cartel, went to Washington D.C. to try to save their case.

First, they went to the DEA’s headquarters and met with acting administrator, Uttam Dhillon and laid out their evidence against Walmart and the murders of many overdosed customers in Texas as a result. They presented evidence and explained they began getting pleas for help from Walmart pharmacists who were highly concerned about having to participate in filling RX’s from known national pill-mill doctors. These pharmacists also pleaded for guidance from Walmart’s Corporate Office and tried to reach out to others. They did not want to dispense these Opioids knowing there was illegal dealing going on, as well as putting customers at risk. These cries for help began surfacing from all over the nation and investigators obtained records showing there were pharmacists from Maine, NC, Kansas, Washington, and other states that were being forced to be a part of the Walmart Opioid pipeline of illegal dispensing; meanwhile, received no help their own Walmart employer.

“One Walmart employee warned about a Florida doctor who had a “list of patients from Kentucky that have been visiting pharmacies in all of central Wisconsin recently. That doctor had sent patients to Walmarts in more than 30 other states."

Walmart did not take action to stop the flow of illegal dispensing of Opioids.

“In response to these alarms, Walmart compliance officials did not take corporate-wide action to halt the flow of opioids. Instead, they repeatedly admonished pharmacists that they could not cut off any doctor entirely. They could only evaluate each prescription on an individual basis. And they went further. An opioid compliance manager told an executive in an email, gathered during the inquiry and viewed by ProPublica, that Walmart’s focus should be on “driving sales.”

“After they finished their presentation, Dhillon sat back in his chair and exclaimed, “Jesus Christ,” according to five people familiar with the investigation. “Why aren’t we talking about this as a criminal case?”

Seven months earlier, prosecutor Rattan had sent an official notification that she intended to indict the corporation for violating the Controlled Substance Act. With support from Brown, they moved forward on their investigation, gathering evidence that would justify the next step of accountability. However, they faced the major obstacle of Walmart being a Fortune 500 company who employs over 2 million people and deals in over $500 Billion in annual revenue. But, before the Texas office could file their case, the DOJ intervened and was ordered to stand down. Trump officials informed Walmart that the DOJ would not prosecute the company on Aug. 31, 2018. This can be collaborated according to this letter from Walmart’s lawyer that lays out the timeline of the case. Still, the TX Prosecutors continued to try and find other avenues to move the case forward.

Surprisingly, seven years earlier, Walmart had agreed to a settlement with the DEA in which it had promised to improve and correct its dispensing practices and controls over the abuse of opioid pill-mill prescriptions. This is an obvious indication that Walmart had already been investigated previously in regards to allowing the Opioid pipeline practices.

Now with DEA’s Dhillon aboard, they presented their evidence to the DOJ, with the hope that the then-deputy attorney general, Rod Rosenstein would come aboard the investigation. They explained the same evidence and added that Walmart was a Repeated Offender of the Control Substance Act.

“Dispensing opioids without a legitimate medical purpose is legally akin to dealing heroin. Criminal law says if a person or entity is willfully blind or deliberately ignorant, they are as liable as if they had acted intentionally. Once Walmart’s headquarters knew its pharmacists were raising alarms about suspicious prescriptions, but the compliance department continued to allow — even push — them to fill them, well, that made the company guilty, the Texas prosecutors contended. This was not a question of a few rogue employees, Rattan explained. Walmart had a national problem. Worse, the prosecutors contended, the company was a repeat offender.”

This evidence justifies an path to criminal prosecution. Brown explained to Rosenstein, “We have to act” and DEA’s Dhillon added that “a fine would not be a sufficient deterrent since Walmart has more money than it knows what to do with.”

Rosenstein responded, “Not that there’s anything wrong with that, we are all capitalists here.”

The prosecuting team then claimed, “they weren’t pursuing Walmart because it was profitable but because, in their view, the company had put its customers at deadly risk.”

Rosenstein then left the room and the hope to revive the criminal case against Walmart had failed.