Royal doctor, 68, who treated Princess Diana and officially identified her body admits to a series of medical blunders that led a to City banker being 'slowly poisoned' to death 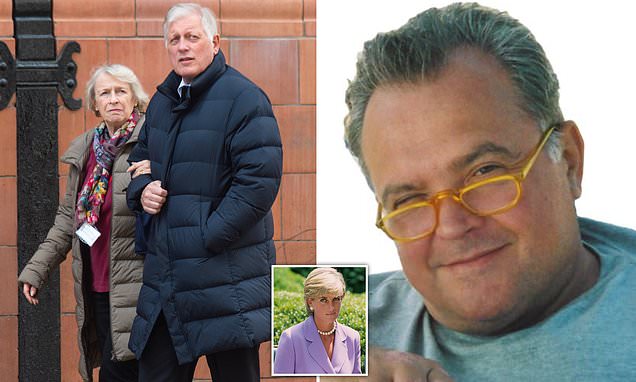 Dr Peter Wheeler (left), 68, has apologised after admitting a series of mistakes that lead to the death of Stefanos Vavalidis (right) in 2016

By ALISHA BUAYA FOR MAILONLINE

Princess Diana's personal physician has admitted to a series of medical blunders that led to one of his patient's being 'poisoned' to death.

Dr Peter Wheeler, 68, who identified Diana's body and has also treated Prince Charles, the Duke of Kent, and a host of celebrities, has been charged with professional misconduct over the death of Greek banker Stefanos Vavalidis, 69.

Mr Vavalidis's lawyer claims his decision to prescribe him methotrexate, a potentially toxic cancer drug, for his psoriasis, meant he was 'slowly poisoned drip by drip by drip' in what he describes as one of the 'worst cases of repeated, persistent negligent care'.

The Medical Practioners Tribunal Service in Manchester heard Mr Vavalidis, a former director of the National Bank ofGreece, suffered from acute liver damage after Wheeler prescribed him the drug to treat his psoriasis and psoriatic arthritis over 12 years.

The banker was correctly treated with the drug by a dermatologist in 1999, but when Wheeler took over in 2003, he gave him 23 repeat prescriptions without studying the medication guidelines or ordering any tests to monitor the effect of the drug on his liver.

Mr Vavalidis was said to have 'suffered gravely' before his death, finding it difficult to climb stairs as his immune system gradually weakened.

He fell ill during a family holiday to Athens in May 2015 and was diagnosed with liver disease, cirrhosis, hepatitis, progressive bone marrow failure and acute gastrointestinal bleeding.

He was flown back to the UK by air ambulance but died at University College Hospital in London in January 2016 with tests showing he had died from cirrhosis of the liver due to methotrexate toxicity.

Perhaps he was on Her Majesty's service.