Google Is Building a City of the Future in Toronto. Would Anyone Want to Live There? 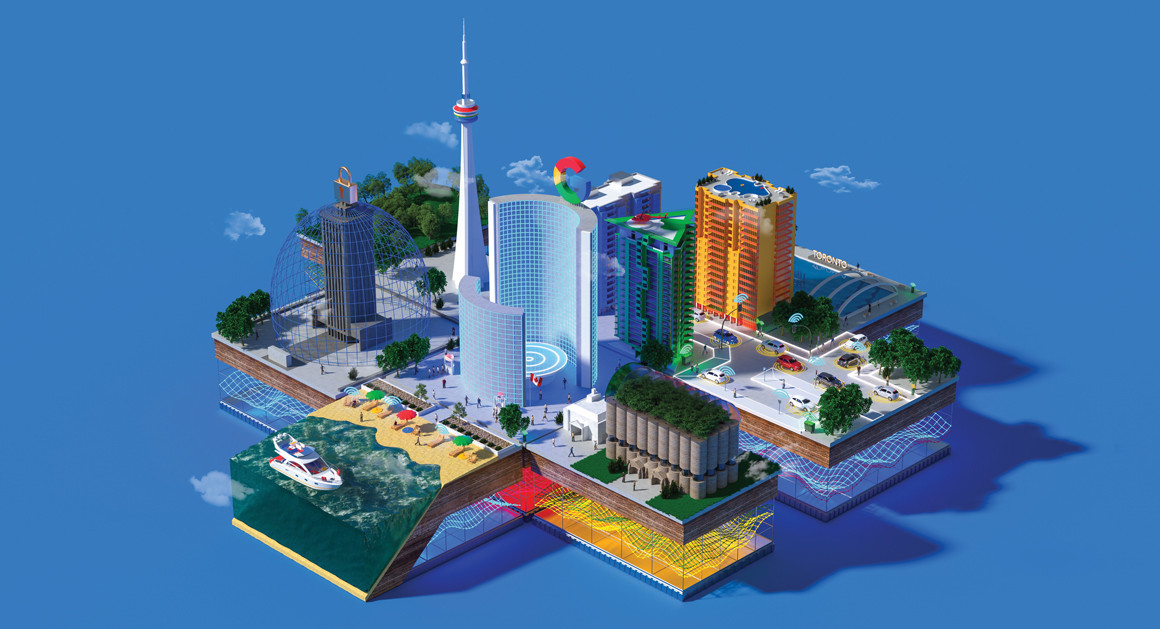 It could be the coolest new neighborhood on the planet—or a peek into the Orwellian metropolis that knows everything you did last night.

TORONTO—Even with a chilly mid-May breeze blowing off Lake Ontario, this city’s western waterfront approaches idyllic. The lake laps up against the boardwalk, people sit in colorful Adirondack chairs and footfalls of pedestrians compete with the cry of gulls. But walk east, and the scene quickly changes. Cut off from gleaming downtown Toronto by the Gardiner Expressway, the city trails off into a dusty landscape of rock-strewn parking lots and heaps of construction materials. Toronto’s eastern waterfront is bleak enough that Guillermo del Toro’s gothic film The Shape of Water used it as a plausible stand-in for Baltimore circa 1962. Says Adam Vaughan, a former journalist who represents this district in Canada’s Parliament, “It’s this weird industrial land that’s just been sitting there—acres and acres of it. And no one’s really known what to do with it.”

That was before Google.

This past October, a coalition of the Toronto, Ontario and Canadian governments contracted with Sidewalk Labs, a sister company of Google, to come up with a $50 million design for a dozen acres on the waterfront’s far eastern end. The idea is to reimagine Toronto’s derelict waterfront as “the world’s first neighborhood built from the internet up,” as Sidewalk describes it. The neighborhood, called Quayside, would leapfrog the usual slow walk of gentrification to build an entire zone, all at once, as a “smart city,” a sensor-enabled, highly wired metropolis that can run itself.

Toronto’s choice of the Google-affiliated firm immediately captured the attention of urban planners and city officials all over the world; magazine stories trumpeted “Google’s Guinea-Pig City” and “A Smarter Smart City.” Still in its early days, the partnership has left people curious but wary. Google? What does a tech company know about running a real live city?

In one sense, what’s perhaps surprising is that it has taken this long. Silicon Valley’s innovators have long had side obsessions with making the world a better place, driven largely by the confidence that their own brainpower and a near-total disregard for tradition can break old logjams. PayPal co-founder Peter Thiel helped seed the “seasteading” movement to create offshore libertarian paradises; the tech incubator YCombinator is currently running a public-policy experiment in Oakland, California, giving residents a guaranteed monthly stipend to see how it might improve their quality of life.

The notion of the feedback-rich “smart city” has circulated for years, and in practice has mostly taken the shape of centuries-old cities like New York or Boston adopting sensor-enabled stoplights or equipping their residents with an app for spotting potholes. But the real dream, a place whose constant data flow lets it optimize services constantly, requires something different, a ground-up project not only woven through with sensors and Wi-Fi, but shaped around waves of innovation still to come, like self-driving cars. Thanks to a host of technological advances, that’s practical now in a way it never has been before. Mass-produced sensors now cost less than a dollar apiece, even for hobbyists; high-speed broadband and cheap cloud computing mean that a city can collect and analyze reams of data in real time. 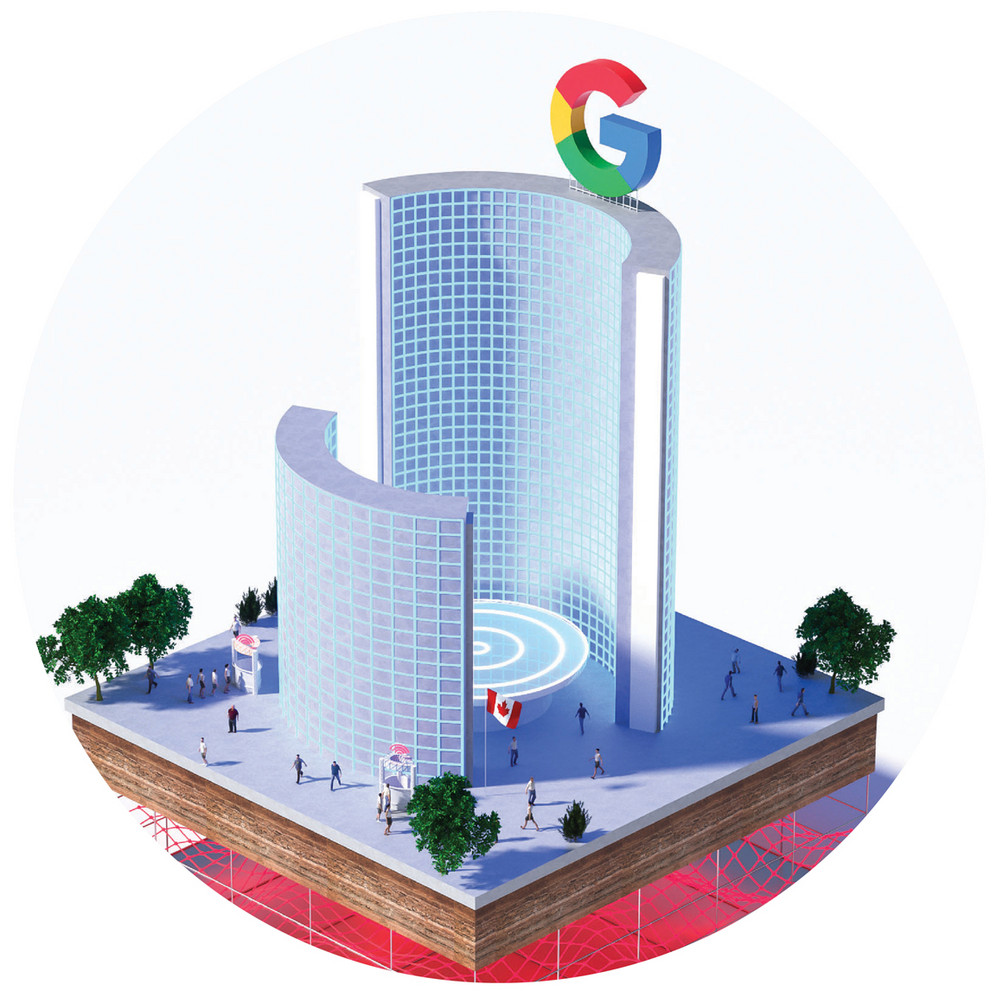 A truly smart city runs on data and algorithms rather than civic decisions made by humans. So, who owns all the data? Whose laws apply?

Google had been interested in city-building for some time—former Google CEO Eric Schmidt has said that founders Larry Page and Sergey Brin began dreaming about reengineering cities “years ago”—but its venture into urbanism got more concrete in 2014, when Schmidt reached out to Dan Doctoroff, an investor and philanthropist who had been a deputy mayor of New York during Michael Bloomberg’s administration and energetically drove its rebuilding after the 9/11 attacks. (“Dan Doctoroff has done more to change the face of this city than anyone since Robert Moses,” Bloomberg once said.) Doctoroff was available: He had become CEO of Bloomberg’s media company and then left when the former mayor unexpectedly returned.

Doctoroff formed Sidewalk Labs and headquartered it in Hudson Yards, a brand-new neighborhood on Manhattan’s once-seedy far west side that took root amid what was left over from a failed 2012 Olympic bid that Doctoroff had helmed. (There was supposed to be a stadium in that spot.) And the company started looking for land.

Doctoroff had learned in New York that it’s far easier to build where there are no people, and where higher levels of government can’t tell you no, and Toronto had a rare opportunity on the table. Appealingly, it was on the waterfront, and the city was ready for it to change. It even had a new government structure in place to oversee the property, an entity called Waterfront Toronto, made up of three layers of government—city, provincial and national—which itself is the product of a failed Olympic bid. Its job was to make something happen. That so much of government was already on board with the waterfront project was hugely appealing to Sidewalk. Canada’s youthful prime minister, Justin Trudeau, was invested in the idea; he had already been talking to Google’s leadership about the possibility of a second Silicon Valley north of the border.