THEN THEY CAME FOR THE CONSERVATIVE SITES... 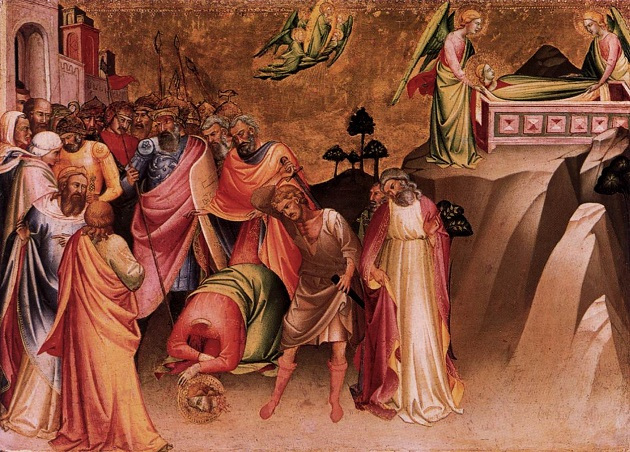 PayPal banned Jihad Watch and the American Freedom Defense Initiative from receiving online donations using their platform because of the site’s “activities” after being designated as “hate sites” by left-wing groups.

Jihad Watch was reportedly banned from PayPal on Saturday after ProPublica – a George Soros funded investigative group – targeted the site and its director Robert Spencer (not to be confused with white nationalist Richard Spencer) in a hit piece that claimed the site was guilty of “extreme hostility toward Muslims.”

The assault on Jihad Watch began on Friday when Spencer received an emailthat he described as a “threatening” from ProPublica journalist Lauren Kirchner.

The email informed Spencer that she was including his site among a list of hate sites identified as such by the Southern Poverty Law Center (SPLC) and the Anti-Defamation League (ADL) – both widely considered to be left-leaning organizations.

The purpose of the hit piece published by ProPublica was clear: put pressure on tech companies that offer their platforms to sites that it deems as “hate sites.”

ProPublica specifically called out Amazon, PayPal, and Newsmax for maintaining partnerships with Jihad Watch. Hours after the outlet published its hit piece, Spencer received the following email from PayPal:

We have recently reviewed your usage of PayPal’s services, as reflected in

our records and on your website https://www.jihadwatch.org. Due to the

nature of your activities, we have chosen to discontinue service to you in

accordance with PayPal’s User Agreement. As a result, we have placed a

We ask that you please remove all references to PayPal from your website.

This includes removing PayPal as a payment option, as well as the PayPal

If you have a remaining balance, you may withdraw the money to your bank

be found via our Help Center. We thank you in advance for your cooperation. If you have any questions or need our support, please contact the PayPal Brand Risk Management

PayPal notified Pamela Geller’s American Freedom Defense Initiative (AFDI) on Monday that it was banning her site from its platform in a nearly identical email like the one received by Jihad Watch.

Spencer told The Daily Caller in an email that these attacks stem from the violence in Charlottesville, and the Left sees the tragedy as an opportunity to pounce on sites that it finds offensive.

“The Left sees blood in the water after Charlottesville and is moving in for the kill, attempting to delegitimize, silence and destroy all dissent,” he wrote. “The freedom of speech, the foundation of a free society, is being eroded away under our very noses.”

It is worth noting that PayPal has also banned many accounts that are tied to the “alt-right” after the SPLC identified them as “hate sites” or “hate groups.”

A report by CNN Tech found that PayPal blocked payments to the majority of the accounts listed by the SPLC, including Richard Spencer’s National Policy Institute, Identity Evropa, Radical Agenda, and the Revolutionary Conservative.

Jihad Watch describes its purpose as “attempt[ing] to raise awareness about the activities of the global jihadists,” while the AFDI describes its objective as “go[ing] on the offensive when legal, academic, legislative, cultural, sociological, and political actions are taken to dismantle our basic freedoms and values.”

Robert Spencer called for people to boycott PayPal in a post on Jihad Watch which led to the hashtag #BoycottPayPal appearing on Twitter’s trending now list: 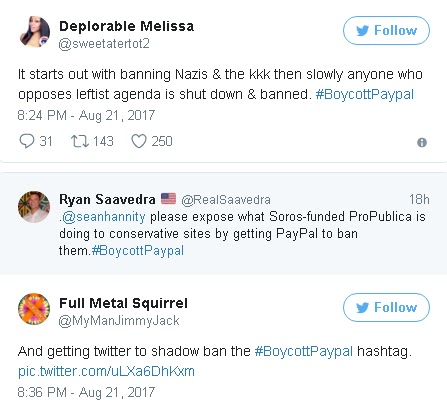 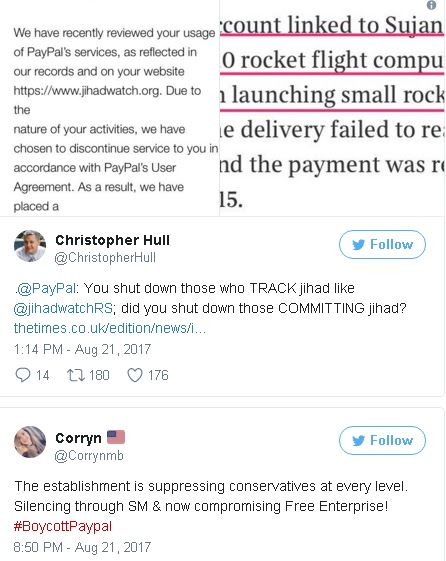 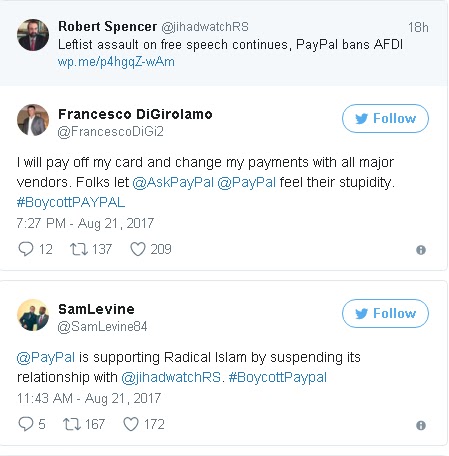 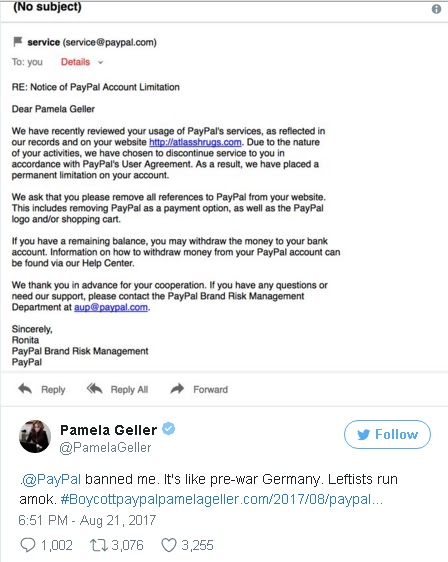 PayPal failed to respond to multiple requests for comment from TheDC.

I hope you can see where this is going.

The tribulation saints are, quite simply, saints living during the tribulation. We believe that the church will be raptured before the tribulation, but the Bible indicates that a great number of people during the tribulation will place their faith in Jesus Christ. In his vision of heaven, John sees a vast number of these tribulation saints who have been martyred by the Antichrist: “There before me was a great multitude that no one could count, from every nation, tribe, people and language, standing before the throne and in front of the Lamb. They were wearing white robes and were holding palm branches in their hands” (Revelation 7:9). When John asks who they are, he is told, “These are they who have come out of the great tribulation; they have washed their robes and made them white in the blood of the Lamb” (verse 14).

The tribulation will be a time of great trouble for the wicked, because of God’s judgments. It will also be a time of great persecution for the believers—or saints—because of the Antichrist’s persecution (Revelation 13:7). Daniel saw the Antichrist “waging war against the saints and defeating them” (Daniel 7:21). Of course, the saints’ eternal salvation is secure: Daniel also saw that “the Ancient of Days came and pronounced judgment in favor of the saints of the Most High, and the time came when they possessed the kingdom” (Daniel 7:22; cf.Revelation 14:12–13).

The tribulation saints will hear the gospel from several possible sources. The first is the Bible; there will be many copies of the Bible left in the world, and when God’s judgments begin to fall, many people will likely react by finding a Bible to see if prophecies are being fulfilled. Many of the tribulation saints will also have heard the gospel from the two witnesses (Revelation 11:1–13). The Bible says these two individuals “will prophesy for 1,260 days [three and a half years]” (verse 3) and perform great miracles (verse 6). And then there are the 144,000 Jewish missionaries who are redeemed and sealed by God during the tribulation (Revelation 7:1–8). Immediately following the description of their sealing in Revelation 7, we read of the multitudes of tribulation saints who are saved from every corner of the world (verses 9–17).

The tribulation saints will serve their Lord Jesus Christ in the midst of desperate surroundings. Faithful to the end, many of these believers will die for their faith. But in their death, they overcome; “They overcame [Satan] by the blood of the Lamb and by the word of their testimony; they did not love their lives so much as to shrink from death” (Revelation 12:11). And God will reward them: “He who sits on the throne will spread his tent over them. Never again will they hunger; never again will they thirst. The sun will not beat upon them, nor any scorching heat. For the Lamb at the center of the throne will be their shepherd; he will lead them to springs of living water. And God will wipe away every tear from their eyes” (Revelation 7:15–17).

We praise the Lord that the great day of trouble will also be a great day of grace. Even as God is meting out His just punishment on an unbelieving world, He will be restoring Israel to faith and extending grace to all who believe, both Jew and Gentile. God has always been in the business of saving people, and that salvation will still be available during the tribulation. Don’t wait until then, however; receive Jesus now (John 1:12).

I don't personally believe in the rapture. I do believe the persecution is here. Imagine if women or gays or the handicapped were denied en masse rights to transit funds. Perilous times are here for us. As the liberal world order rises to power the saints will be persecuted culminating in death. One of the main reasons will be because they did nothing to stop it. In fact they did very little to even try to understand it.