It is today May 30, 2016, but we are reporting on the potential for a major earthquake to erupt on the Cascadia fault zone sometime this year or in 2017.

The inspiration for this article lies in etheric nexus between past, present, and future. How many minutes will a quake in the Cascadia last? Some are currently estimating 5 minutes, while others have recorded 4-6 minutes from similar sized quakes in the past, and some in the future are imagining a quake that last just under 7 minutes. Who is or was or will be right? Readers should go to the Dr. Waterman interview video if they are interested in the present analysis and start listening at the approximately 21:00 minute mark.

Althistory.Wikia.org provides “any and all original alternate histories” and below is their reading of a history still to come;

[Althistory.Wikia.org] The 1700 Cascadia Earthquake was a magnitude 8.7 – 9.2 megathrust earthquake that occurred in the Cascadia subduction zone in 1700. The earthquake involved the Juan de Fuca Plate underlying the Pacific Ocean, from mid-Vancouver Island in southwest Canada off British Columbia to northern California, along the Pacific Northwest coast. The length of the fault rupture was about 1000 km (600 mi) with an average slip of 20 meters. The Cascadia Earthquake caused a Tsunami that struck the coast of Japan.

Evidence supporting the occurrence of the 1700 earthquake has been gathered into the 2005 book, “The Orphan Tsunami of 1700″, by geologist Brian Atwater and others.

The evidence suggests that it took place at about 9:00 PM on January 26, 1700. Although there were no written records in the region at the time, the earthquake’s precise date is nevertheless known from Japanese records of a tsunami that has not been tied to any other Pacific Rim earthquake. The most important clue linking the tsunami in Japan and the earthquake in the Pacific Northwest comes from studies of tree rings (dendrochronology) which show that red cedar trees killed by lowering of coastal forests into the tidal zone by the earthquake have outermost growth rings that formed in 1699, the last growing season before the tsunami. Oral traditions also exist among the region’s original inhabitants, although these do not specify the date.

The geological record reveals that “great earthquakes” (those with Richter Scale magnitude 8 or higher) occur in the Cascadia subduction zone about every 500 years on average, often accompanied by tsunamis. There is evidence of at least 13 events at intervals from about 300 to 900 years with an average of 590 years. Previous earthquakes are estimated to have occurred in 1310 AD, 810 AD, 400 AD, 600 BC and 170 BC.

22nd August 2017 the Cascadia subduction zone ruptured in a magnitude 9.2 earthquake, it sent a massive tsunami to the coast. The shaking lasted for six minutes 58 seconds, triggering landslides throughout the surrounding area. The tsunami hit land within 15-20 minutes, destroying structures and entire towns on the coast. This was probably the strongest earthquake to strike the contiguous United States in recorded history.

The major nearby cities, notably Seattle, Portland, Vancouver, Victoria, and Tacoma, which are located on inland waterways rather than on the coast, were sheltered from the full brunt of a tsunami. These cities had many vulnerable structures, especially bridges and unreinforced brick buildings; consequently, most of the damage to the cities was from the earthquake itself. The Boeing plant and the buildings of the Microsoft company are destroyed killing the majority of the workforce. Among the dead is Bill Gates who dies when his office is destroyed.

Towns located on the coast were particularly badly hit with Astoria, Ocean Shores and Seaside all wiped from the map. In some areas the Tsunami is 80 feet high, the waves wash up to 25 miles inland. Land along the coastline also suffers badly from subsidence. Some areas of the coast sank by 22 feet causing flooding inland. Due to the massive earthquake several Cascadia volcanoes including Mt. Rainier, Mt. Hood and Mt. Baker all erupt in major stratovolcanic eruption with a Volcanic Explosivity Index (VEI) of 6.

In the low land areas not hit by the tsunami or flooding are effected by the earthquake in other ways, in many places liquifaction causes many building, bridges and other structures to collapse, sand blows also effect many areas these being buried under up to four feet of sand.

Death tolls for the 2017 Cascadia earthquake and subsequent tsunami, landslides, floods and volcanic eruptions total over 100,000. However, the full total may never be known due to the large numbers of holiday makers who are along the coast at the time.

What is odd about this entry is wiki page is that it is based on both fact and fiction. It is up to the reader to discern what will be fact and what will be fiction for an event that has not yet happened, but it is odd that a government scientist and the planners at FEMA are also planning for a Cascadia quake that will for upto 5 minutes during which time you will not be able to stand up or walk around.

Such a prolonged period of shaking means disaster for buildings, humans, plants, and animals alike. It will be devastation and a return to the pre-industrial age with no access to electricity, water, money, entertainment, medical care, or food in the “just in time” manner we have become accustomed to in modern western civilization.

Therefore, the iPhone generation will have to stare at blank screens until reality sets in for them. The danger of this loss of technology also means bad news that for the rest of us since it means that most Knowledge is lost. It means that Knowledge evaporates in an instance since our sources of reference and truth will all be gone if it was stored in digital format. It will be the Mandela Effect writ large over society. Ignorance will prevail and only the loud and inspired will lead and survive or will the meek finally inherit the Earth?

Furthermore, earthquake swarms have been occuring under several mountain ranges in Washington state. Now combine these earthquake swarms with a scenario in which there are extensive forest fires from explosions, man made fires, burning houses and and destroyed infrastructure. 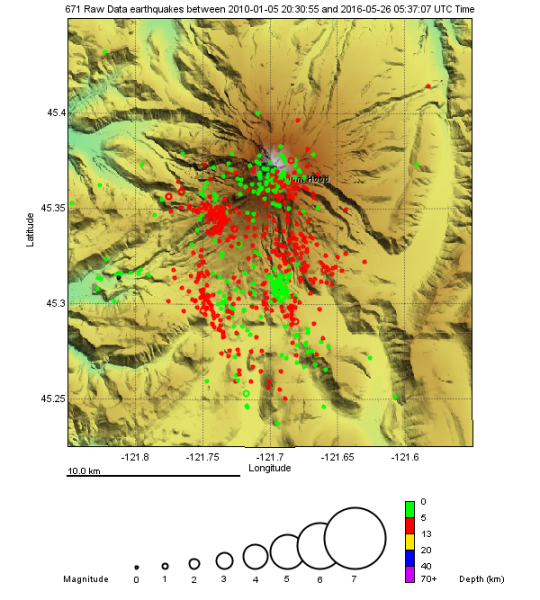 Consider the size of the Fort McMurray forest fire is now over 560,000 hectares in size and which after several weeks is still not under control, but in fact growing with close to 2800 fire fighters battling the fire known as “The Beast”.

This fire has grown from nothing to this magnitude in one month and is still growing with an infrastructure to fight it head on, but consider what happens when such a fire starts and the 2800 fire fighters and the infrastructure to fight it are not available nor feasible nor an option? How large will these fires become and how safe will going into the wilderness be for the survivors? 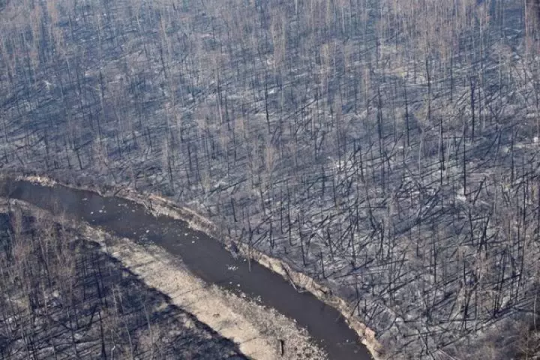 Populations will obviously decrease drastically as a result as will the numbers of “environmental and economic refugees” from such a scenario. The Syrian refugees we are feeling sorry for now and chiding and mocking today may be our neighbours in the coming weeks and months. Large populations will be on foot as the system that provided “just in time” supply chain totally falls apart and we are reduced to our base instincts for survival and safety. 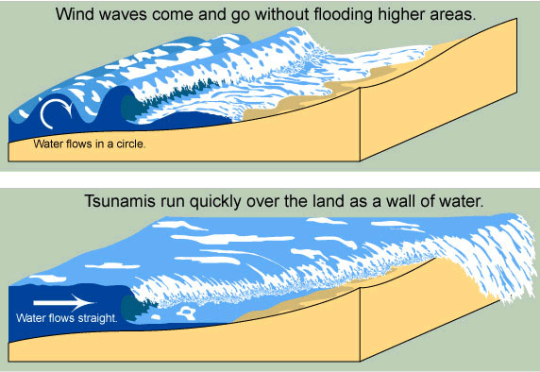 Dr. Waterman also states that the Webbot from May/June forecasts a major earthquake in China which will be related back to CERN. When the Chinese finally make this link there will be hell to pay. Who will be paying the Chinese Piper? Perhaps it was this Piper the Economist cover was referring to along with the 11.5 and 11.3 arrows at the bottom of the photo are there to show the size of the quakes? Hence the “Panic” in China and the “Chinese Panda” rises under the watchful gaze of the “Russian Bear” aka Putin. Notice that the “Nuclear Football” will also be dropped on America as it becomes Amerika as young children will be like “Finding Nemo” looking for a lost parent in vain?

Will the best of humanity emerge or will the worse side of humanity once again emerge? It will be a return to family, friends, neighbours, communities, sects, and tribes. We will not survive on our own and the only way to get through this disaster will be to work together for peace and deal with the trouble makers as they pop up. If readers are not comfortable with such an “alternative history” reading then consider the Cascadia Earthquake Exercise Planning from FEMA and judge for yourself what will happen in this region after the quake.

[The New Yorker] Kenneth Murphy, who directs FEMA’s Region X, the division responsible for Oregon, Washington, Idaho, and Alaska, says, “Our operating assumption is that everything west of Interstate 5 will be toast.”

The New Yorker provides an equally sobering assessment on the Fukushima quake and the coming Cascadia quake;

Soon after that shaking begins, the electrical grid will fail, likely everywhere west of the Cascades and possibly well beyond. If it happens at night, the ensuing catastrophe will unfold in darkness. In theory, those who are at home when it hits should be safest; it is easy and relatively inexpensive to seismically safeguard a private dwelling. But, lulled into nonchalance by their seemingly benign environment, most people in the Pacific Northwest have not done so. That nonchalance will shatter instantly. So will everything made of glass. Anything indoors and unsecured will lurch across the floor or come crashing down: bookshelves, lamps, computers, cannisters of flour in the pantry. Refrigerators will walk out of kitchens, unplugging themselves and toppling over. Water heaters will fall and smash interior gas lines. Houses that are not bolted to their foundations will slide off—or, rather, they will stay put, obeying inertia, while the foundations, together with the rest of the Northwest, jolt westward. Unmoored on the undulating ground, the homes will begin to collapse.

When the next very big earthquake hits, the northwest edge of the continent, from California to Canada and the continental shelf to the Cascades, will drop by as much as six feet and rebound thirty to a hundred feet to the west—losing, within minutes, all the elevation and compression it has gained over centuries. Some of that shift will take place beneath the ocean, displacing a colossal quantity of seawater. (Watch what your fingertips do when you flatten your hand.) The water will surge upward into a huge hill, then promptly collapse. One side will rush west, toward Japan. The other side will rush east, in a seven-hundred-mile liquid wall that will reach the Northwest coast, on average, fifteen minutes after the earthquake begins. By the time the shaking has ceased and the tsunami has receded, the region will be unrecognizable.

Four to six minutes after the dogs start barking, the shaking will subside. For another few minutes, the region, upended, will continue to fall apart on its own. Then the wave will arrive, and the real destruction will begin.

How to reconcile such disparate strange pieces of data into one thought around the number of minutes this quake will shake? One step at a time; young bloods – one step at a time. “Perhaps I’ve said too much.”