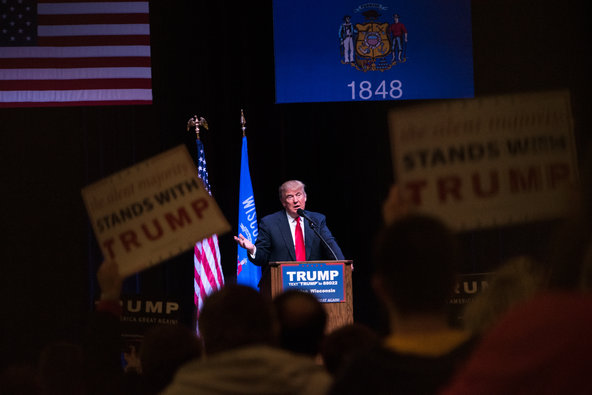 Donald J. Trump during a campaign stop in Racine, Wis., on Saturday.Credit Hilary Swift for The New York Times

Updated, 7:29 p.m. | RACINE, Wis. — Donald J. Trump on Saturday went further than ever before in his criticism of the North Atlantic Treaty Organization, telling a crowd here that he would be fine if NATO broke up.

Mr. Trump had previously questioned the need for the organization, and on Saturday he reiterated his criticism that other NATO countries were “not paying their fair share” in comparison with the United States.

“That means we are protecting them, giving them military protection and other things, and they’re ripping off the United States. And you know what we do? Nothing,” Mr. Trump said at a subdued rally here on the outskirts of Milwaukee. “Either they have to pay up for past deficiencies or they have to get out.”

The role of the United States in NATO has become a point of contention here between Mr. Trump and his chief rival, Senator Ted Cruz of Texas, as the candidates battle to win the state’s 42 delegates in Tuesday’s primary. Mr. Cruz has criticized Mr. Trump’s comments on NATO, saying that the United States needed to support the organization’s fight against terrorism and to counterbalance Russia’s influence.

On Saturday, as he did in an interview with The New York Times last week, Mr. Trump painted the organization as old and out of date.

Later, at an event in Wausau, Wis., Mr. Trump seemed to acknowledge the controversy his initial remarks about NATO had prompted.

“I said here’s the problem with NATO: it’s obsolete,” Mr. Trump said, recounting his comments. “Big statement to make when you don’t know that much about it, but I learn quickly.”

In the Times interview, Mr. Trump also said he was open to allowing Japan and South Korea to build their own nuclear arsenals rather than relying on the United States for protection. The United States has been wary of nuclear proliferation in the Asia Pacific region, and President Obama on Friday rebuked Mr. Trump for his comments, saying he worried the real estate billionaire “doesn’t know much about foreign policy or nuclear policy or the Korean Peninsula or the world generally.”

Mr. Trump responded Saturday, saying at his first event, “I didn’t say anything about letting Japan go nuclear.” But, he continued, “We have to let them take care of themselves and if that means they have to some day get nuclear weapons — in all fairness folks, I don’t really like this — eventually they’re going to want to get them anyway.”

At his second event, he returned to the question of a nuclear Japan, arguing both sides of the issue in almost the same sentence.

“I would rather have them not arm, but I’m not going to continue to lose this tremendous amount of money,” Mr. Trump said. “And frankly, the case could be made, that let them protect themselves against North Korea. They’d probably wipe them out pretty quick.”

A fight between Japan and North Korea, he added, would be “a terrible thing,” but he framed the scenario in financial terms.

“Good luck, folks, enjoy yourself,” he said. “If they fight, that would be terrible, right? But if they do, they do. We can’t be the policemen to the world and have $19 trillion in debt, going up to $21 trillion and we’re sitting on a bubble that’s going to explode and we’re going to all end up you know where.”

In Wausau, Mr. Trump also turned his attention to the United Nations, warning that it could meet a fate similar to NATO under a Trump administration. “By the way, United Nations — same thing, smaller numbers,” he said, seeming to call for a pared-down version of the intergovernmental organization.

NATO is long past its need. It is the fear based organization that keeps the notorious military industrial complex afloat to use our tax dollars, convert them to private interests while reducing us to a form of penal servitude. They wage war of dominion at the expense of all. A serious adjustment is necessary before we blow ourselves up.