A logistics ship belonging to the Russian navy has encountered a Turkish submarine passing through the Dardanelles toward the Marmara Sea, accompanied by a Turkish coast guard boat.

A tense moment was when the navy ship encountered a Turkish submarine across the shores of Çanakkale's Eceabat.

The Yauda reached the coast of Çanakkale in an hour and five minutes and traversed the strait by 1:15 p.m.

The crossing is also noteworthy due to its timing, as it came during a period in which Turkish-Russian relations have been strained due to Turkey’s downing of a Russian fighter jet due to its violation of Turkish airspace despite repetitive warnings on Nov. 24.

The Kremlin has been demanding an apology, while Turkey insists its move was defensive and that the crisis only occurred because Russia violated Turkish airspace.

“No country can ask us to apologize [for the incident] because [we were] doing our job,” Turkish Prime Minister Ahmet Davutoğlu said Nov. 30, during a joint press conference with NATO Secretary-General Jens Stoltenberg. 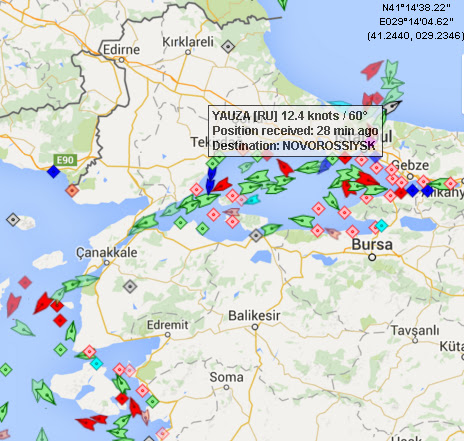 It would seem traffic has resumed and Yauza has passed into the Black Sea.