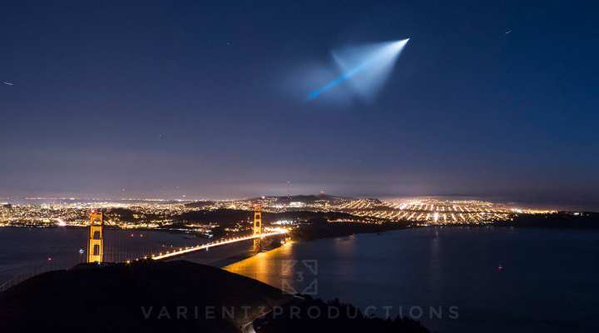 A light created by a naval test fire off the Southern California coast was seen across the Southland and Arizona on Saturday evening.

The U.S. Navy said it launched a second -- and final -- missile in a planned exercise Monday afternoon from a submarine off the Southern California coast.

The second test launch of the Trident II (D5) missile from a ballistic submarine in the Pacific Ocean took place Monday afternoon, the Navy said. The blast-off took place to far less fanfare than Saturday night’s launch, which provoked residents from San Francisco to Mexico to take to social media, posting photos of an eerie-looking bluish-green plume smeared above the Pacific.

Speculations were wide-ranging, including rumors of an otherworldly alien UFO visit. In fact, the streak was generated from the Trident missile’s rocket motor.

The Navy later confirmed a ballistic submarine launched an unarmed Trident II (D5) missile in a test flight, but would not define the window of time available for conducting additional launches, nor would it disclose where the exercise was actually taking place.

“It’s important that we test these missiles for our national security,” said John M. Daniels, spokesman for the secretive Strategic Systems Programs office, which oversees the Navy’s nuclear-tipped missile arsenal. “We don’t announce future launches, but this is it for any time soon.”

The Kentucky, the ballistic submarine, conducted the two launches as part of a demonstration and shakedown operation, or DASO, process that certifies the readiness of a submarine’s crew and strategic weapons before returning to operational availability.

It occurs after a submarine has its mid-life nuclear refueling, which involves replacing the expended nuclear fuel in the submarine’s reactor with new fuel. The Kentucky entered Puget Sound Naval Shipyard in Bremerton, Wash., in February 2012 for an overhaul that ended in April. 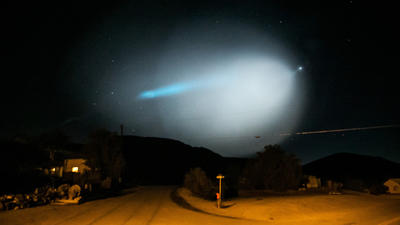 The Navy is considering posting additional photos -- and possibly video -- of the missile launches after the current exercises are completed, Daniels said, but it has yet to decide.

The Navy’s fleet of 14 ballistic submarines can each carry 24 Trident missiles, each tipped with 14 independently targetable thermonuclear warheads.

The Navy annually tests the Tridents, on the West Coast and on the East Coast, near Florida.

The $31 million missile, built by Lockheed Martin Corp. in Sunnyvale, Calif., has had more than 150 successful launches since its first test in 1989. It is capable of hitting a target 4,000 nautical miles away.

The test on Saturday featured the launch of a missile outfitted with a dummy warhead toward the Kwajalein Atoll, a missile test site that’s part of the Marshall Islands in the western Pacific.

While the risk of nuclear confrontation between the United States and Russia declined after the 1991 fall of the Soviet Union, it has never gone away.

The U.S. military’s nuclear weapons strategy rests on a triad of delivery systems — bombers, submarines and land-based missiles — developed early in the Cold War to deliver warheads anywhere in the world.

The Pentagon recently embarked on a $355-billion program for modernizing each aging leg of the U.S. nuclear triad over the next decade.

“We do not seek a cold, let alone a hot, war with Russia,” he said to the forum. “We do not seek to make Russia an enemy. But make no mistake; the United States will defend our interests, our allies, the principled international order, and the positive future it affords us all.”