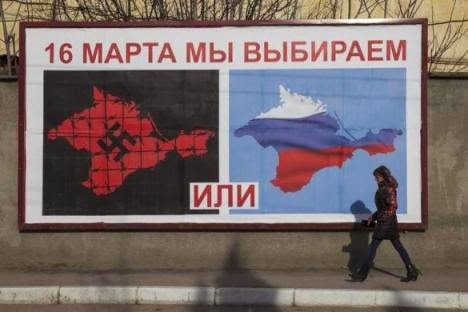 I don't know if any of you are aware of the fact that Friday the Russian Air Force dispatched four strategic bombers specifically the Tupolev 95MS on a 24 hour mission over the Arctic. They can carry 33,000 pounds of ARMAGEDDON each. We were all participants in the Russian version of Dr. Strangelove.

Perhaps you may not have considered the possibility that the MAD doctrine may not work with Vladimir Putin. Russia has conducted numerous first strike drills in the European and Pacific regions. They have moved nuclear weapons into Belarus with directions to take out Warsaw in a first strike.

Russia completed a bomb shelter upgrade program whereby all the citizens of Moscow can be sheltered in the face of a nuclear attack. They are prepared, and we are not.

The Ukraine crisis is the same as the Cuban missile crisis in their eyes. Just as the United States was prepared to launch an all out first strike at that time so are the Russians this time. Dimitri Medvedev made the same speech President Kennedy made November 23, 2011. It is well worth devoting a little of your busy time to listen to it. In it he directs Russian missile forces to be armed and targeted at us.

In 2012 the Russian Air Force over flew Canadian airspace in a Freedom of the Skies flight. The purpose was obvious. They were targeting sites to attack with their new GPS system.

This is a national crisis of the highest order. I do not believe we as a nation are fully informed of the depth of the Russian mobilization and the intent thereof. The Prime Minister is poking the big guy at the beach and challenging him to a fight. The drawback is are we prepared to fight to any degree? Our supply ship is being towed home most likely a total loss. Are our destroyers at sea looking for the Russian ballistic submarines that must be stationed off both our coasts? Are we participating in Standing Force Atlantic? Are we receiving intelligence from same? Are our fighter jets prepared to engage mass targets that could lay waste to this nation in mere hours? The Russians launched a bombing run on neutral Sweden recently.

(Öland's southern point, where the lighthouse Long Jan standing, should have been the target of recent Russian bombing exercise. Svenska Dagbladet revealed in April that Russia practiced air raid against Swedish goal at Gotska sandön.)

Do you have plans to acquire replacement supply ships to support our navy at sea? I could find you several good ships on the used market for around $50 million. This is no time for complacency. The politics around who loses face in the Ukraine means nothing. Could Canada treat hundreds of thousands of burn victims in a few days? The answer is, of course, NO! Could we even intercept one or two incoming bombers or missiles to save at least one or two cities. I sincerely doubt it. Your understanding will increase exponentially the day after if any of us survive, but it will be far too late.

Is the RCMP looking into Russian nationals who may have access to critical infrastructure and putting them under scrutiny? I would suggest the group of gun owners who recently had their rifles declared prohibited be considered as a citizens defense unit instead. They have NATO compatible rifles and have had security screening. This is the 21st century. Things can develop very, very quickly. Our Inuit are organized in a militia unit. You'll need hundreds of thousands to administer what is left after the unthinkable.

However, as my father always said the best fight is the one you don't get into. Dialogue must be kept open at any level possible. Sanctions are a destructive fool's errand. Putin may seriously discuss them in Paris as Europe becomes familiar with the term BLITZKRIEG again. Even when NATO was prepared, we never thought we could hold Germany in a full conventional assault. We are much less prepared today.

I hope you slept well. The 24 hour Arctic patrol is on their way home this time. Call it saber rattling if you will, but the saber is directed at us. What are you as a Parliament prepared to do to protect our country? I would suggest being honest with Russia and admit the culpability in destabilizing the previous government in Ukraine. They already know that. A promise not to do it again would be a sign of good faith. A policy to remove offending radars and weapons at their borders would cinch the peace. They don't want to fight. They're looking for a way out. If we don't blaze a trail for it, you better prepare for a short, sharp nuclear war. They're going to hit us with everything they've got while they can and survive the counter attack. Putin knows he has to fight now before the noose is tightened further around his neck. He has no other option.

As a further difficulty China is prepared for a short, sharp nuclear war against Japan according to Capt. James Fannell, deputy chief of staff intelligence and information operations for the U.S. Pacific Fleet (PACFLEET) who spoke at the WEST 2014 conference in San Diego in February.

In a parody of Dr. Strangelove's character Major Kong, will the Russian pilot be checking his equipment list?

"One 9m/m Makarov pistol, 2 boxes of ammunition, 4 days concentrated emergency rations, one drug issue, one English phrase book and Bible, $500 American dollars, one Gold American Eagle, 9 packs of chewing gum, one prophylactic, three lipsticks, and three pair of blue jeans. A fellow could have a good weekend in Kaliningrad with all that stuff." We'll see.

Good luck. We're going to need it. If you need to understand the effects of a nuclear war, the BBC's 1965 classic The War Game will give you quite an education on the effects. The first effect will be the light burning out your retinas and the boiling of the humors of the eye. That's what duck and cover was designed to protect you from. Most of our police and first responders will very likely be blinded. You'll need a backup plan.

The magic moment a child's eyeballs are boiled from the flash a serious burn coursing the optic nerve to the brain. That's pain!