KNOCK! KNOCK! Who's there? Kafka. Kafka who? Franz Kafka the harbinger of a New World Order. Kafka the metamorphisis of the human race into a new creation of human evolution the transcendent man. A man not made in God's image but in the image of the beast the machine. It is a deep, dark prognosis; but it is the course being plotted by the machinations of the elite rich megalomaniacs. Their goal is of course The Singularilty where man is made to evolve into machine. The result of course is the total disconnect with the creator physically and more importantly spiritually.

Google is well advised in The Singularity. With their cohorts of which one is pictured above without the traditional bite. Apple computers are marked by a euphemism to the mark of the beast. It is the apple from the Garden of Eden from which certain fruit should not be eaten. That fruit was the apple. It is the symbol of God's creation. Of all the Kafka works, Google has chosen The Metamorphosis. It is an amazing choice. It is symbiotic to the master plan of the globalists the creation of a transcendent man. However, it is brilliant in the degree of error associated to the work by most if not all who have studied the work.

In the original German Kafka said, "Als Gregor Samsa eines Morgens aus unruhigen Träumen erwachte, fand er sich in seinem Bett zu einem ungeheuren Ungeziefer verwandelt." The whole interpretation of the story rests with two words. They are ungeheuren Ungeziefer. An English translation is. As Gregor Samsa awoke one morning from uneasy dreams he found himself transformed in his bed into an enormous insect. It literally means monstrous vermin. Most interpretations have suggested some sort of insect. The beetle and the cockroach have held merit. Google's doodle appears like a better representative for The Singularity the ant. They would prefer the world operated like a giant ant colony. However, we must remember the time. It was 1915 when The Metamorphosis was first published. Anti-semitism was nothing new and Franz was Jewish. He struggled with many things including his faith. It is my opinion the metamorphosis was not into an insect but a journey to his Jewishness with the difficulties it entailed. He would be scorned and tormented. As a visionary he may well have anticipated the coming holocaust. Ungeziefer in Middle German literally means an animal unclean for sacrifice. In modern German that spells vermin. During the holocaust the Jews were called vermin by the Nazis. 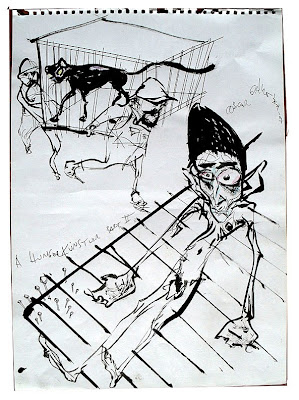 Serious liberties are taken if we get off course from the intended meaning of the works. Many of Kafka's works were never intended to be published or even seen by others. They were willed to his friend Max Brod with specific instructions that they be burned. Max altered much of it for publication. His work The Man who Disappeared was retitled Amerika. There was a TV movie series by the same name that dealt with the takeover of America. It is in the video section in parts. Kris Kristofferson plays the key role in taking America back. In a way the hidden meaning in the doodle is the same. His work In der Strafkolonie The Penal Colony gets into the torture aspect of this world. It is a telling tale to this day. It describes a device that inscribes a prisoner's sentence onto the skin. Is it the tattoo of the holocaust or the mark of the beast of the coming holocaust. Kafka was the Dante of his day. We know where that tale descends.

A modern killing machine in a future penal colony

His works focus on bureaucracy and man's attempt to deal with the so called system especially the police state. In Das Schloss The Castle the hero struggles to get into the mysterious castle of those that govern a small village. Was he seeing the future where the infamous SS commanded the conquered world from Wewelsburg Castle or looking at the past where tyrants commonly occupied a castle fortification.

A machine from the Kafkaesque

In The Metamorphosis the main character Gregor Samsa was alienated as he changed into the vermin. His mother shuddered. His father throws the apple at Gregor. It wounds him and he doesn't fully recover. Is the machine apple thrown at the human race? Will we be wounded? Will we recover? You see the apple symbolizes the creation of God or man. The human father will use it as a weapon. The Godly father warned us to not partake from it. Was an omnipresent God even talking about fruit or was he talking about the beast to come? These are questions of eternity confined to our present day reality. For the beast is a machine with an apple moniker that will ultimately remove us from the creation the Garden of Eden. After all the term Kafkaesque comes from these works. The worldview is skewed. Our abilities are limited. I would suggest the metamorphosis isn't to a creature but a creation in the image of God subject to the persecution by the vermin who would treat such a creation as such. Our Singularity group are in for a bitter disappointment. They have muddled two old words and misinterpreted The Metamorphosis. If they miss a few details in the creation, it will be a disaster.