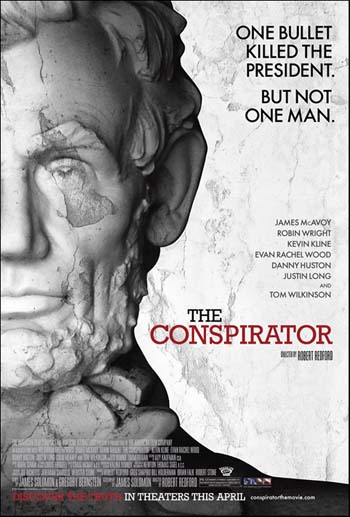 When you know the conspiracy history of things it's not too hard to see through the veils of an event in history and know the truth. As a case in point the recent conspiracy movie on the Lincoln Assassination opens many doors. In my opinion the primary suspect in any Presidential assassination has to be first and foremost the Vice President. It is he who assumes the reins of power which of course includes the power over the purse.

Mr. Lincoln was in a lot of trouble with the international financiers. He was fighting a brutal and of course costly civil war. It is costomary to mortgage the state in prolonged servitude in such affairs. Lincoln passed the National Bank Act which authorized $150 million in debt free money called greenbacks. Like another President one hundred years latter who made the same mistake he was shot and killed. That angle is notably absent from the film and is airbrushed from history.

There is another major cause for war and even a more serious concern in the post war era. That is the battle for the assets of the losing side. That is probably best understood as the gold reserves. The losing side's currency is usually rendered valueless. At the end of any war these reserves usually take flight. The losers try to conceal them from the winners, and the winners try to commandeer them to their personal use. That is as old as the hills as they say. I see that angle in a few of the details presented in the film and the accompanying documentary disc.

The movie centers on the arrest, trial, conviction and execution of Mary Surratt the operator of a boarding house used by the conspirators. After the shooting of President Lincoln all hell broke loose. Everyone from the house was arrested. Mrs. Surratt was put on trial in a military tribunal even though she was a United States citizen. Of course she was convicted and sentenced. The tribunal didn't seek the death penalty. They were told to reconsider. They did. Her lawyer, Frederick Aiken, got a writ of Habeas corpus. The new President, Andrew Johnson, suspended it at 11:30 a.m. if numerology is important to you. Mrs. Surratt was allegedly hung.

The trouble with conspiracy is it knows no bounds. There were three attacks planned that April 14th evening. The main plot involved John Wilkes Booth shooting the President at Ford's Theatre. That is symbolic in the modern era in our belief that the entertainment and news media are vassals of monolithic plots. John Wilkes Booth was the persona actor of his day. It would be the same as any period actor killing the President. Imagine Heath Ledger, the Joker, as one. Perhaps he knew how his character would be used and was suicided.

There were two other facets to the assassination. Booth's co-conspirators were Lewis Powell and David Herold, who were assigned to kill Secretary of State William H. Seward, and George Atzerodt who was to kill Vice President Andrew Johnson. That is where we enter the realm of a complex plot. If Johnson was the ringleader, a feigned attack on him would allay suspicion. I believe that to be the case.

Mrs. Surratt was Roman Catholic. Her son, John Surratt, was involved in a previous plot to kidnap President Lincoln. He conveniently left the country before the assassination. He fled to Montreal a British territory at the time. It is a French speaking Catholic enclave. He was held in sanctuary by the church. In the war, he was a messenger. I believe at the end of the war he was another form of messenger. After Montreal he fled to Switzerland even then the home for unusual banking. From Switzerland he escaped to the Vatican where he was employed with the Papal guards. He was ultimately arrested in Egypt where he was returned to the U.S. to be acquitted at trial in the 'conspiracy.' That was quite the turnaround. I suspect he was employed as an 'agent' by the conspiracy. 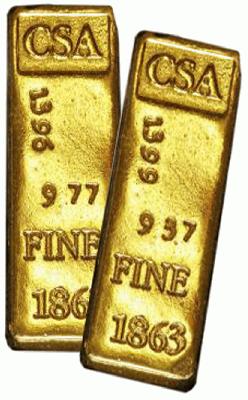 An honorable peace was concluded at the end of hostilities. Generals Sherman and Johnston signed an Armistice that restored the Confederate States to the Union. That Armistice was overturned by President Johnson. Without peace with honor, there was chaos. The Southern treasury was at stake. The power plays began. The Confederate government arranged to evacuate their assets to prevent their capture. President Davis of the Confederate States had to initiate extirpation of gold from Richmond April 2, 1865. There was perhaps an honest man who may well have allowed peace with honor. I believe he was Abraham Lincoln. I believe Sherman did not act without authority in signing the Armistice. I believe Lincoln stood in the way of the return of the Confederate gold. I believe he was murdered because of it.

Harper's Weekly showing the desperate searching for the elusive gold 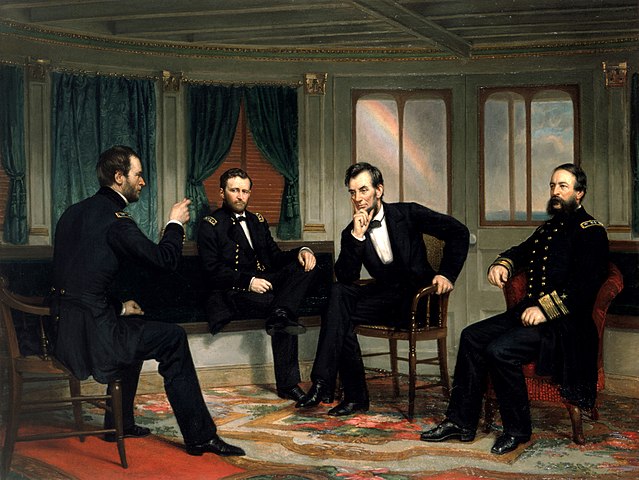 In this famous painting titled Peacemakers President Lincoln devised the future peace plan with Generals Sherman and Grant and Admiral Porter on March 26, 1865. Three weeks later the Peacemaker was assassinated and the plan was destroyed by President Johnson.

Lincoln wanted victory won without retribution. He wanted to “defeat the opposing armies, and to get the men composing the Confederate armies back to their homes, at work on their farms and in their shops. Let them have their horses to plow with, and, if you like, their guns to shoot crows with. I want no one punished; treat them liberally all round. We want those people to return to their allegiance to the Union and submit to the laws.” Again he emphasized that once the “deluded men of the rebel armies” were allowed to surrender and return to their homes, “they won’t take up arms again.”

By assassinating President Lincoln Johnson could orchestrate waves of fear and retribution to cover the movements of his 'conspirators' that I believe included John Surratt. He could maintain martial law and remove any person who might be a threat to his plot.

In the book The Rebel and the Rose the fate of the Confederate gold in April of 1865 is well discussed. The value was supposed to have been greatly inflated by the Union. On May 4, 1865, when two Confederate Navy officials, James A. Semple and Edward Tidball, were entrusted with $86,000 in gold. Jefferson Davis stated in his 1881 book, The Rise and Fall of the Confederate Government, that the “transfer of the treasure was made to Mr. Semple, a bonded officer of the Navy, and his assistant, Mr. Tidball.” Davis added only that the instructions to Semple were for him to attempt to deliver the gold abroad to the financial agent of the government. He was referring to the commercial house of Fraser, Trenholm & Company in Liverpool, England.

Semple and Tidball disappear. Semple appears to intersect the path of destiny with Julia Gardiner Tyler widow of President Tyler. She was an ardent Confederate. He travelled extensively to what is now Canada, but was then a British territory the same territory Mr. Surratt visited. He tried to instigate a war with the Union and the British with the raids by the Fenians. Silver buried near Danviille, Virginia is valued at $16 million today and has been recently recovered and valued at $75 million. So even today we are talking King's ransoms.

In the movie they make light of the fact that Mary Surratt was escorted to the gallows under a black umbrella. They make mention of the fact she wore a veil. Her son left her to die on the gallows rather than turn himself in. Or at least that's what we are lead to believe. Knowing my predators like I do maybe it wasn't Mary under the umbrella. The sacks placed over the heads would negate any examination after the event as their graves were already dug and waiting. One of the gold repositories was actually in Wilkes County a twilight reference to Mr. Booth. Mary Surratt's lawyer believe it or not actually offered his services to Jefferson Davis to act as a reporter. That's quite a thing to say for a Union officer. It tells us he is an insider. That would be treason with a war starting and loyalties on the line. In the movie he raises gold rimmed glasses in toasts as another twilight clue. 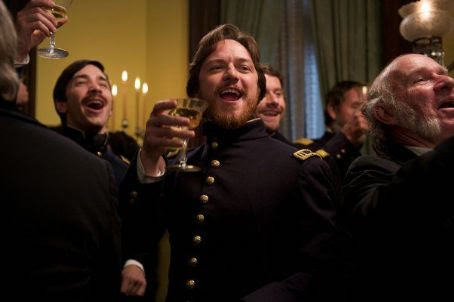 Another little factoid that carries over the centuries knitting conspiracy with conspiracy in the ultimate pyramid is that General George Custer was on station in Washington. He would have been instrumental in rounding up culprits and hearing versions of what transpired. Unlike modern day equivalents, they can't die in a helicopter crash in Afghanistan. They are sent to the Dakota's in a gold rush to be massacred in battle. In fact in the March South Custer's men were set to mutiny and ambush and kill him. He was warned a day prior and survived. 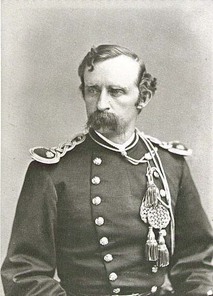 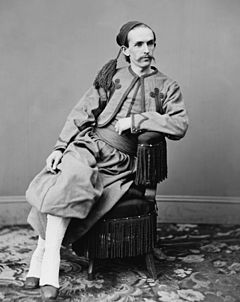 John Surratt in the uniform of the Vatican guard

"IF THE AMERICAN PEOPLE COULD LEARN WHAT I KNOW OF THE FIERCE HATRED OF THE PRIESTS OF ROME AGAINST OUR INSTITUTIONS, OUR SCHOOLS, OUR MOST SACRED RIGHTS, AND OUR SO DEARLY BOUGHT LIBERTIES, THEY WOULD DRIVE THEM OUT AS TRAITORS!" ~ABRAHAM LINCOLN 1864.