ELLA MAE WIGGINS UNION LEADER MOTHER OF 9 SHOT TO DEATH SEPT. 14, 1929 WE GIVE THANKS TO YOU

There is a lot to be thankful for. Imagine working 12 hour nights supporting 9 children. Imagine having 4 of them die of whooping cough. Imagine losing your livelihood to a request to work days to nurse them. Imagine being shot to death for trying to organize a union. Imagine your remaining children sent to orphanages. What we take for granted came at a great cost paid in blood by mothers and children. INTERPOL made a major arrest of persons forcing 400 children as young as six to work in mines for no pay in Burkino Faso.
-

I'll never forget my first encounter with the story of mill worker-labor minstrel Ella May Wiggins and her last words, "Lord a-mercy, they done shot and killed me." Why, I wondered, was I never taught this in my history classes?

Wiggins uttered those words in the fall of 1929 when she was shot down by vigilantes for supporting a strike at a textile mill in Gastonia, N.C. No one was ever convicted for the murder of the 29-year-old mother of five.

Martyred labor heroes like Wiggins are the great "disappeared" in most U.S. history books because they all too clearly demonstrate the dark underside of class in the American story. Many would rather that part of the story never be told.

A group in Gaston County, N.C., is bound and determined to tell it, however, and to make sure that Wiggins and her fellow workers will be remembered.

The Ella May Wiggins Textile Heritage Council, composed of artists, scholars, and historians, sponsored a poetry reading in Wiggins' honor at the Poor Richard's Book Shoppe in downtown Gastonia Saturday, Jan. 28. Poets from around the area came to read and discuss poetry inspired by the textile experience in the South.

Over the past four months, the group has made much use of social media in telling the Wiggins story, contacting folks around the country to spread the news. Some 500 have joined the discussion, including donors and others who are helping the group attain nonprofit status. During Gastonia's "Celebrate Gaston" festival in October, the council recruited Gastonia resident Margaret Smith to portray Wiggins in a dramatic presentation.

The council hopes to educate people to the full story about Wiggins and the other Southern textile workers who stood up for their rights and commanded the nation's attention in the late 1920s and 1930s.

"Our goal is to show that there is support near and far for a memorial for our Ella, which is long overdue," said council member Amy Sifford in a recent e-mail conversation.

After earlier strikes in German-owned mills in Elizabethton, Tenn., in March 1929, workers at the giant Loray Mill in Gastonia went on strike that April. The protest later spread to mills in Marion, N.C. Violent confrontations with state and local authorities led to the wounding of dozens of strikers and several officers and the deaths of Wiggins and Gastonia police chief O.F. Aderholt.

A full-page ad in the Gastonia Gazette declared the purpose of the strike to be the "overthrowing of this Government and destroying property and to kill, kill, kill."

Yet Wiggins and other Southern workers like her were striking against 12-hour days, pay that ranged from $8 to $10 a week, and filthy, unsafe working conditions "amid a terrible din of machinery in temperatures near 85 degrees," according to historian Irving Bernstein. They also had to deal with the notorious "stretch-out," a common practice at the time that forced workers to double and triple their output at breakneck speed.

Wiggins was a single mother who had lost four children to whooping cough and struggled to rear her other five after her husband John Wiggins abandoned them. According to writer Beth Crist in an article for the North Carolina Museum of History, Ella May, who was white, and her family lived in a rented shack in an African-American neighborhood called Stumptown. She earned $9 a week as a spinner at her textile plant. 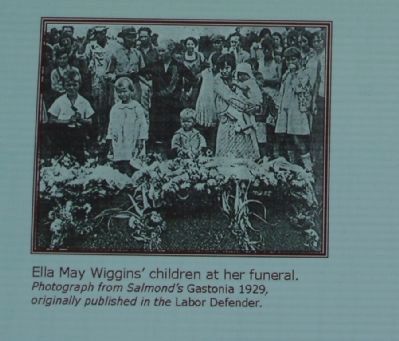 Despite a furor in the town against labor organizers and amid claims they were all communists, Wiggins became committed to the labor movement and the National Textile Workers Union (NTWU). Perhaps her best-known contribution was as a balladeer to striking workers. She would serenade the families of strikers in the tent colony they established after being evicted from company housing. Here are a few lines from her "A Mill Mother's Lament":

We leave our homes in the morning

We kiss our children goodbye

While we slave for the bosses

Our children scream and cry

But understand all, workers

Our union they do fear

And have a union here

That outspoken advocacy ultimately cost her her life. She was killed as she and other union members were returning home in a truck after a confrontation with an angry mob. Although five men were arrested and charged with the killing, they were quickly acquitted in a March 1930 trial.

Five years later the textile industry was rocked by a general strike that idled 180,000 workers in the South and 400,000 nationwide. Seven striking workers were shot to death in Honea Path, S.C., as local, state, and regional authorities aligned together with industry leaders, the press, and local hooligans to stop the Southern labor movement dead in its tracks.

You can't kill an idea, however, and that's why the spirit of Ella May Wiggins refuses to fade away even if the modern-day versions of those same forces that killed her wished she would just simply disappear. 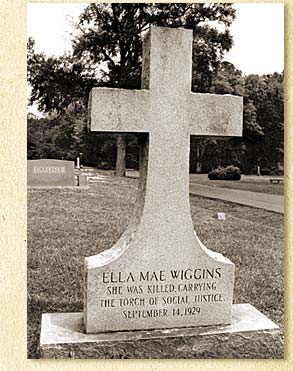