June 6th 1944 another day that lives in infamy. It was the day the allies stormed the beaches of France to assault Nazi Germany head to head. The invasion was a monumental success. Casualties were high. The march across Europe made them even higher. We won the war. The battle against Nazism was over or so we thought. 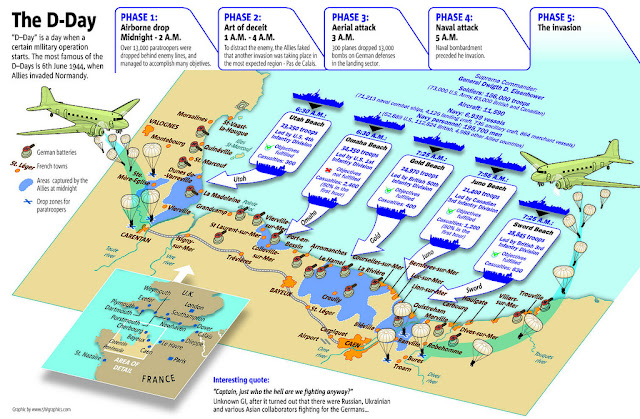 The Invasion by British, Canadian and American forces

Less well known was another day of infamy August 10th 1944. On that day in Strasbourg at the Maison Rouge Hotel the Nazi elites met to discuss the post war strategies to defeat the allies through covert means using German intelligence, special forces, Reichsbank loot, and Germany's corporations to attack and destroy the allies from the inside.

Of course these are not the fine points of military history our children are exposed to in the public education system. However, they are the mainstay of anyone who is self taught. For at this meeting noted in intelligence report EW-Pa 128, were crafted the insidious plot that culminated in things like Operation Paperclip where escaping Nazis were brought to the west, the establishment of the notorious Gehlen Organization that ran as a parallel CIA, the rat line that saw stolen funds moved to Argentina.

The whole idea of a pan-European project was always the goal of Hitler and the Nazi party.

"Behind the officially propagated notion of greater Europe Economics' hid longstanding efforts and planning for the enforcement of an economic hegemony of Germany on the continent, the complete rebuilding of national economies in terms of division of labor under German interest and access to colonial, complement spaces' in Eastern Europe and overseas. "

The German Europe after the invasion of Russia

The above map looks a lot like the vision of the European Union which is always trying to expand. Europa was their dream; Europa was their goal. On the anniversary of D Day, they are a short distance from realizing that goal. In Canada D Day veterans were protesting the lack of financial support from the modern day veteran fighting a de facto mercenary actions for corporations as they have been want to do. In Europe Canadian Prime Minister Stephen Harper has been extolling the virtues of the Pan European project in London and Paris. The only thing wrong with the European project is that it hasn't been finished. They need the tools to deal with the crisis. French President Francois Hollande welcomes Prime Minister Stephen Harper upon his arrival at the Elysée Palace in Paris on Thursday.

In the early days, Dr Hjalmar Schacht the President of the Reichsbank, suggested using credit to ensnare the countries of Europe. Hitler was not able to approve that approach because the oil cartels were hiring him to capture their oil wells nationalized by Stalin. That was the conspiracy behind WWII and the invasion of Russia. However, the war failed. The loans are still on the table forcing nations to their knees in submission to Germany. You see the fifth column or inside agent is instrumental. The Germans have always played a good game world global domination. That's why in 1954 at the Hotel the Bilderberg in Arnhem a followup meeting was held May 29th. It was a post war focus group to carry on the agenda of the Red House Report as the Strasbourg agenda has been termed. Bilderberg was founded by an SS Colonel who married into the Dutch royal family. He was Prince Bernhard. Remember the Dutch royals are Royal Dutch Shell victims of Stalin's nationalization of the oil properties. Prince Bernhard also worked for IG Farben the Zyklon B manufacturer. 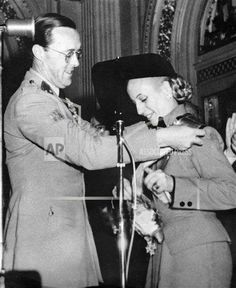 Prince Bernhard and Evita Peron trustee of the Nazi loot. 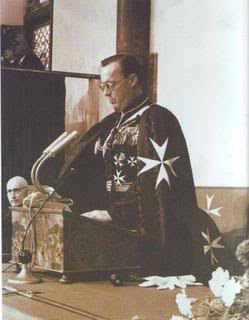 So you see it's D Day plus 68 years. Our leaders, and Prime Minister Harper is not alone in extolling the Nazi Europa project, Prime Minister Cameron has done the same. We sit on the verge where the nations of Europe must marry into a Fourth Reich or face financial oblivion. I tend to think that was the substance of the last Bilderberg Group meeting at the end of May like the first. Deutschland uber alles. The struggle is very near conclusion. They have won. 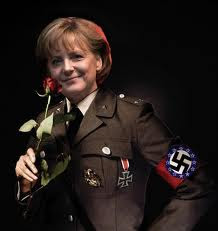 SUCCESS!!! We are the master raceafter all.