MASS RESIGNATION OF BANKSTERS WATCH OUT 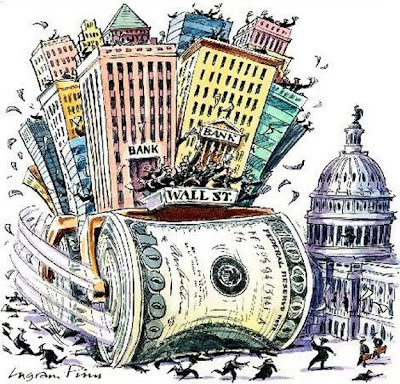 You don't have to go to Denmark to find something rotten. It seems you can remain almost anywhere and see a massive tectonic shift in the financial industry. A plethora of banksters have announced their resignations. The old adage of the rats deserting the ship has never been truer.
-
The most well-known rat World Bank President Robert Zoellick has declared that he will resign effective the 30th of June. That is earth shaking because he is in the cabal of insiders that have a death grip on the debt burdens crushing us to death. The post has been written in stone as an American one. There is talk of change in that regard. Zoelick has prepared a ground breaking report on the future of China's economic model. That can mean two things. We're all going Commie or we're doomed. I guess that means were doomed either way.
-
Chief financial officer of Australia & New Zealand Banking Group Ltd. Peter Marriott (I guess he gets a deal on hotel rooms) will be resigning May 1. The chief executive for global wealth management and private banking is being replaced as well.
-
"These changes support our super regional aspiration at a time banking globally is undergoing a major upheaval as a result of low credit growth, funding challenges and new regulation," chief executive Mike Smith said in a statement.
-
One thousand jobs will go out the window as well.
-
Nicaragua’s Central Bank President Antenor Rosales quit amid differences with President Daniel Ortega over plans to use central bank reserves for the creation of a regional bank for a Venezuelan-led bloc of Latin American nations, known as Alba.
-

Venezuela is willing to transfer 1 percent of its reserves, or about $300 million dollars, to a bank controlled by the Alba bloc, Venezuelan President Hugo Chavez said on state television Feb. 4. The Alba members include Venezuela, Cuba, Nicaragua, Ecuador and Bolivia.

Chavez, who says he wants to eliminate the “dictatorship” of the U.S. dollar, has promoted the expanded use of the sucre, a virtual currency created by the Alba bloc in 2009, for regional trade.

Now this sounds like these countries are building their own life boat for the post collapse world in my opinion. However, it still uses the tenet of regionalization a part of the globalization process.

-
German President Christian Wulff resigned in a scandal over the fact the crook was trying to muzzle the media over allegations the guy took a cool million from a businessman's wife in a loan scandal. He called the Bild newspaper and threatened 'war'. The German President is supposed to be the moral (BARF) compass of the state. It's amazing how many guys named Christian are devoted to the dark side.
-
Stephen Williams Royal Bank of Scotland's Australian arm's honcho has been tendered to pasture. There are no details. I guess he couldn't figure out how to borrow money to get out of debt.
-
The head of Kuwait’s central bank of more than 25 years has resigned, state media said Monday, in the latest shake-up among the Gulf nation’s veteran policymakers as political tensions grow.
-
The official Kuwait News Agency said Sheik Salem Abdulaziz Al Sabah, a member of the Gulf nation’s ruling family, has stepped down after serving as Central Bank governor since 1986.
-
Sheik Salem also was linked by opposition lawmakers to a corruption scandal that alleged officials received government payoffs.
-

Andrej Plos, the chief executive officer of Nova Kreditna Banka Maribor, who took the helm of Slovenia’s second-biggest bank in January, offered his resignation today without giving a reason. Bozo Jasovic, the CEO of the larger Nova Ljubljanska Banka d.d. stepped down in December over the bank’s attempt to sell the holding in retailer Mercator Poslovni Sistem d.d. to the Croatian rival Agrokor d.d.

Slovenian banks are struggling with mounting losses as the faltering economy pushes more companies into bankruptcy. Lenders in Slovenia, which adopted the euro in 2007, reported 356 million euros ($469 million) of losses last year, the central bank said on Feb. 7.

Abanka Vipa d.d., Slovenia’s third-biggest lender by assets, reported a loss of 119 million euros, while NLB will report a third consecutive loss for 2011, Jasovic has said.

Not that I've ever been a believer of one size fits all, but it doesn't. Even a moron should have been able to see that the Euro a very strong currency is not fit for small less resourceful economies. You can only drive up the price of your goods and services to the point no one buys them. Then you implode perhaps even taking the bigger ones with you. If megalomania is a disease, why do we allow it to go on? Try as a small boy running in your father's shoes. Wear your own size and you'll run faster than your father at some point.

Angela Merkel and Nicolas Sarkozy getting ready for Europe as children

Amitabh Chaturvedi quit as managing director and chief executive officer (CEO) of private sector lender Dhanlaxmi Bank Ltd on Monday, following alleged differences with the bank’s board on a range of issues relating to business strategies.

Chaturvedi spent a lot of money on hiring people and expanding the branch network, but income did not grow to that extent. That was the key to differences between him and the directors.

Well that will do it every time. The fool was giving people jobs and cutting in on the bottom line. He must have failed Greed Economics 101.

Now the link for the next bank was broken. That implies a little 'conspiracy'. So we see there is a little more to the story.

AK Jagannathan, the chief executive and managing director of Tamilnad Mercantile Bank, has quit after a one-and-a-half-year tenure.

His exit could jeopardise the return of normalcy at the lender after nearly two decades of factional fight for control.

The 90-year-old private bank headquartered in Tamil Nadu's coastal town of Tuticorin has been in the thick of a battle between two factions of the founding Nadar community for control.

In 1994 Ashok became an outcast among the Nadars, who are fiercely possessive of the bank, when he sold his 18% equity in it to the Essar Group. This triggered the ongoing, 17-year-old ownership battle over the profitable bank.

During the period, the shares have shifted hands from the Essar group to billionaire entrepreneur C Sivasankaran and then to a slew of foreign investors. Also, the period has been marked by fissures within shareholders from the Nadar community.

Serial entrepreneur Ramesh Vangal, the man who brought Pepsi to India, has made an exit from the Nadar community-driven Tamilnad Mercantile Bank, doubling his returns from the bank, in which he held shares for four years.

That's got to be a tough town to do business in on a good day. After the heart attack a simple resignation is a breath of fresh air. This bank may be more local squabble as opposed to a role in the shrinking global economy.

Goldman Sachs Group Inc Chairman and Chief Executive Lloyd Blankfein said he is not stepping down, despite media reports that he has plans to resign.

Now this guy's holding onto the door frame. The shadow power structure says you're done. Blankfein sounds like a name in a Bond novel. Well you know what happens to them.

So is it all about to come apart at the seams or is this just every banker for himself. You would prefer to ride off into the sunset before the lynch mob gathers. That's smart banking.