Richard Drew is an Associated Press photo-journalist, perhaps most notable for his photo The Falling Man which depicts a man falling from the World Trade Center towers following the September 11, 2001 attacks. A British documentary "The Falling Man" about the photo premiered on the Discovery Times channel on September 10, 2007.

Drew was one of four press photographers present at the assassination of Robert F. Kennedy. Drew has been an Associated Press photographer for 40 years, and lives with his wife and two daughters in New York City. 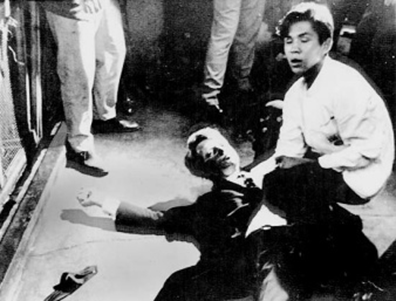 Bobby Kennedy’s Bloody Dying Breaths (PHOTOS): Richard Drew put his camera bag and watched the huge skyscrapers, seemed like a race to the clouds at an accelerated clip.

“I am very surprised at how quickly it was built,” he said, building the World Trade Center, a monolith of peering over the edge of the beige baseball cap. “I just hope that’s not for another purpose.”

It was about 14 hours a clear Wednesday afternoon in mid-July, and Drew, a veteran Associated Press photographer wire frame and silver beard, carefully cultivated, who betrays his 64 years, was near the northwest intersection of Vesey and West of Lower Manhattan, the street noise climbing frame, cranes and steel such as an international business center now under construction. Nine years and two months ago in this very spot – now a pedestrian in the shade tight Plaza Building Goldman Sachs – Drew took the picture, which became one of the iconic images of disasters in American history. 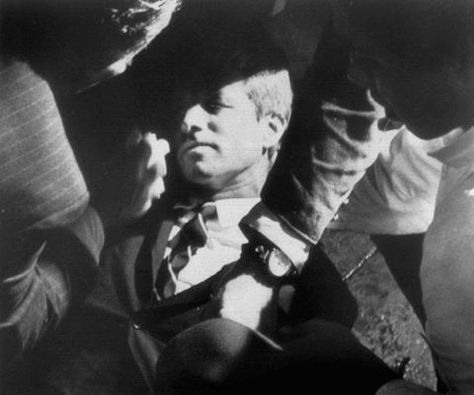 Richard Drew, a young photographer, was thirsty, so he entered the kitchen of the Ambassador Hotel in Los Angeles the night of June 5, 1968.

Only 21 and working his first real newspaper job, Drew was there to cover Robert F. Kennedy's win over Eugene McCarthy in the California presidential primary. Instead, he became one of just four photographers to document the shooting that killed Kennedy.

"I remember it like it was yesterday," said Drew, 61, who is now a photographer for the Associated Press.

"I saw this gun pointing at me," said Drew, who was walking behind Kennedy just before he was shot. Instinctively, Drew hit the floor.

Drew hadn't been assigned to cover the primary that night. But "always wanting to be in the thick of things," he showed up anyway. He was in the habit of photographing the candidates who passed through town.

Drew, who was a photographer for the Pasadena Independent-Star News, found a spot onstage as the young Senator from New York delivered his victory speech to a packed house in the ballroom.

But it was hot, so with the speech nearly over, Drew headed off stage to the kitchen for a glass of water. Moments later, he was standing atop a stainless steel cooking table snapping photographs as Kennedy lay bleeding on the floor after being shot four times with a .22 caliber revolver by assassin Sirhan Sirhan.

The resulting image is haunting: a grainy black-and-white shot looking down at Kennedy as he lay dying on the floor surrounded by campaign supporters and kitchen staff.

It's not the only iconic photograph of Drew's career. He later shot what became one of the most controversial images taken during the World Trade Center attack: a lone man falling headfirst from one of the towers.

The shadow shrouding the Kennedy image may reflect the symbolic darkness of that moment in our nation's history, but journalistically, it's a regret for Drew.

Some people have all the luck. I mean the photographer. Those around him seem to be without any luck at all. I mean the guy should wear the homicide squad T shirt. "My day begins when your day ends." If he's standing beside you, RUN!

However, there is great significance to this man's work. We know the media is a giant counter intelligence operation. They've always got conveniant cover for a covert mission. You see you can't have a master plan without the satanic images that go with it.

Furthermore, al CIAda as we have come to know them developed a camera known as 'The Stinger'. It was .22 caliber just like Sirhan's gun. Maybe the photographer didn't go for water as he said. Maybe he went to get his special camera or load it. How did he get the run of the place, stand so close to the target, and do nothing to intercede in it?

Modified C.I.A. "Stinger" re-loadable .22 magnum pen-gun is cocked via camera's film advance lever. The magnum round is used to offset the diminished velocity as the bullet penetrates the lens elements. Other models incorporate baffles within a telephoto lens which then works quite effectively as a silencer (supressor).

The C.I.A. Stinger (sold commercially by Military Armaments Corporation as the "Single-Shot Survival Weapon" is perhaps the single most popular weapon the C.I.A.'s Technical Services Division has ever offered. It has seen successful deployment in toothpaste tubes, pens, cigars, etc. It may be swallowed or stowed as a suppository to avoid detection. 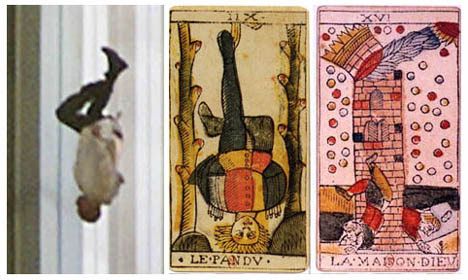 There is also a tarot card called the Lightning Struck Tower. In this card a force from the heavens hits a tower, like jets striking the Twin Towers. Circles in the air are debris flung into the sky as people fall from the tower. This card has its own Falling Men.

Coincidence? Synchronicity? Or the power of symbolism. With so many photos, why did this one Falling Man photograph strike a chord and become an icon of 9/11? It possesses an innate symbolism. The Jungian collective unconscious works in mysterious ways. And it repeats itself.

Or whoever created the tarot hundreds of years ago planned 9/11. That would be mother-of-all conspiracy theories.