IRENE STEERS THE REVERSE COURSE OF THE 9/11 AIRCRAFT

There is little the satanic souls omit from their rituals. So ingrained are the symbols and omens, they are signatures. On August 28, 2011 Hurricane Irene entered the city from the East River off the Brooklyn docks at 9 a.m. It passed within half a mile of the World Trade Center site hundreds of yards from Wall Street and the New York Stock Exchange.

At 9:03 a.m., the time the second plane hit the World Trade Center, it was centered over Central Park. It followed the exact reverse route of the 9/11 aircraft. Of course the turn into Manhattan occurred around the Brooklyn Navy Yard. The track through Manhattan led to the vicinity of the Brookhaven National Laboratory as outlined before. 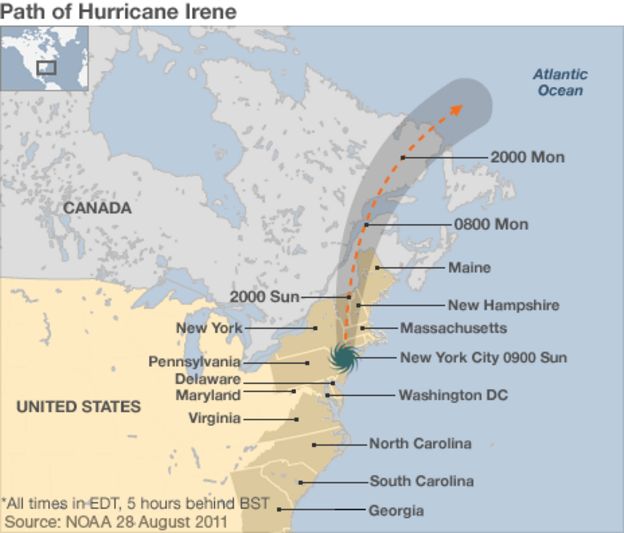 In scripture the elder and honoured man who prayed at St. Paul's the church under the WTC that survived the War of the Revolution and 9/11 could be George Washington. Verse 15

The Prophet at the tail can be understood to be Obama. He has been leading them astray. The people are swallowed up. Godless evil doer speaking folly is not lost upon us.

The bricks that have fallen being replaced with dressed stones and the sycamores being cut down with cedars in their place take on significance as well. Verse 10

Vertical aerial photography of Ground Zero after September 11, 2001. The chapel is surrounded by St. Paul in red.

We see the miracle of the significance of 9/11. The man made Babel fell and is not to be depended on. The NWO tried very hard to destroy, but they cannot destroy God's kingdom if he doesn't allow it. The face of George Washington is on the dollar. They will try to destroy it too, but our actions and reactions can give us a reprieve.

For to Us a Child Is Born

1[a] But there will be no gloom for her who was in anguish. In the former time he brought into contempt the land of Zebulun and the land of Naphtali, but in the latter time he has made glorious the way of the sea, the land beyond the Jordan, Galilee of the nations.[b]

2[c] The people who walked in darkness have seen a great light; those who dwelt in a land of deep darkness, on them has light shined.

3 You have multiplied the nation; you have increased its joy; they rejoice before you as with joy at the harvest, as they are glad when they divide the spoil.

4 For the yoke of his burden, and the staff for his shoulder, the rod of his oppressor, you have broken as on the day of Midian.

5 For every boot of the tramping warrior in battle tumult and every garment rolled in blood will be burned as fuel for the fire.

6 For to us a child is born, to us a son is given; and the government shall be upon[d] his shoulder, and his name shall be called[e] Wonderful Counselor, Mighty God, Everlasting Father, Prince of Peace.

7Of the increase of his government and of peace there will be no end, on the throne of David and over his kingdom, to establish it and to uphold it with justice and with righteousness from this time forth and forevermore. The zeal of the LORD of hosts will do this. Judgment on Arrogance and Oppression

8The Lord has sent a word against Jacob, and it will fall on Israel;

9and all the people will know, Ephraim and the inhabitants of Samaria, who say in pride and in arrogance of heart:

10"The bricks have fallen, but we will build with dressed stones; the sycamores have been cut down, but we will put cedars in their place."

11But the LORD raises the adversaries of Rezin against him, and stirs up his enemies.

12 The Syrians on the east and the Philistines on the west devour Israel with open mouth. For all this his anger has not turned away, and his hand is stretched out still.

13The people did not turn to him who struck them, nor inquire of the LORD of hosts.

14So the LORD cut off from Israel head and tail, palm branch and reed in one day—

15 the elder and honored man is the head, and the prophet who teaches lies is the tail;

16for those who guide this people have been leading them astray, and those who are guided by them are swallowed up.

17Therefore the Lord does not rejoice over their young men, and has no compassion on their fatherless and widows; for everyone is godless and an evildoer, and every mouth speaks folly.[f] For all this his anger has not turned away, and his hand is stretched out still.

18For wickedness burns like a fire; it consumes briers and thorns; it kindles the thickets of the forest, and they roll upward in a column of smoke.

19Through the wrath of the LORD of hosts the land is scorched, and the people are like fuel for the fire; no one spares another.

20 They slice meat on the right, but are still hungry, and they devour on the left, but are not satisfied; each devours the flesh of his own arm,

21Manasseh devours Ephraim, and Ephraim devours Manasseh; together they are against Judah. For all this his anger has not turned away, and his hand is stretched out still.