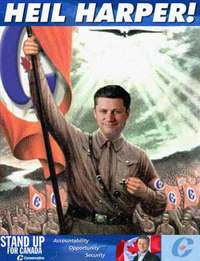 From the modern world's living embodiment of Adolf Hitler, Prime Minister Stephen Harper has returned again to introduce his notorious anti-terrorism laws before this session of Parliament. Be damned the economy. Be damned the gun owners who voted the wolf to lead the flock. He will have power lots of power. The most contentious of the lot of course, the Orwellian staple of dictators from time immemorial, preventive arrest. In the past niggers, Jews, and commies all shivered in their boots over such madness. Now the followers of Islamic faith will have their turn in the new concept of the perpetual enemy of the state.

To the neofascists on the verge of their great day of sacrifice, September 11th, they are prepared to overturn centuries of development in a free and just society with the stroke of the pen. The nature and severity of such laws should only be decided on the battlefield because the Canadian nation sent 120,000 of its finest sons and daughters to slaughter in two world wars over issues such as these. To succumb to the modern day equivalent based on the same staged terror events as the infamous Reichstag fire is the ultimate vengeance. However, vengeance it was always designed to be. In 1944 the German industrialists met at the Maison Rouge Hotel in Strasbourg on August 10, 1944 where they plotted the Fourth Reich and the demise of the west.

Nazis infiltrated the west under the guise of the cold war in Operation Paperclip to the point they established the notorious Bilderberg Group in 1954. Prince Bernhard of the Netherlands was the founder. His past associations as a member of the Nazi party and rank of Colonel in the SS were glossed over. He rehabilitated himself as an executive for the I G Farben company. He used his experience from the dark side to be the the company's intelligence officer. Anticipating the need for Zyklon B gas profited his company handsomely. It profited the Nazi hierarchy well too. Dead Jews do not need assets. Fleeing Nazis do.

Of course following the German roots of the evil the meetings of the Bilderberg Group are secret. There has to be something terribly slimy about German roots and secret meetings. We wonder if the Prime Minister has attended the modern day equivalent of the infamous Wannsee Conference where the final solution was legally established. You see in the Prime Minister's feeble mind we have the Islamic question. And the first step to solving the problem are anti-terror laws that strip the freedoms from individuals so that when we round up people we can do it all legally.

There we go; the Germans were brilliant. In a classic fifth column move, they infiltrated and gained control of the western governments for the ultimate act of revenge and the establishment of the Fourth Reich. How long must we wait before we can greet our leader with the age old refrain of Zieg Heil? Unfortunately not too long. These laws could be established by the Christmas recess. What a shame we lost so many in the world wars when we could have so easily learned to speak German. Hail Victory!

In an exclusive interview with CBC News, Prime Minister Stephen Harper says the biggest security threat to Canada a decade after 9/11 is Islamic terrorism.

In a wide-ranging interview with CBC chief correspondent Peter Mansbridge that will air in its entirety on The National Thursday night, Harper says Canada is safer than it was on Sept. 11, 2001, when al-Qaeda attacked the U.S., but that "the major threat is still Islamicism."

"There are other threats out there, but that is the one that I can tell you occupies the security apparatus most regularly in terms of actual terrorist threats," Harper said.

Harper cautioned that terrorist threats can "come out of the blue" from a different source, such as the recent Norway attacks, where a lone gunman who hated Muslims killed 77 people.

But Harper said terrorism by Islamic radicals is still the top threat, though a "diffuse" one.

CBC's exclusive interview with Stephen Harper about how 9/11 changed Canada, and how it changed him, runs this Thursday night onThe National.

"When people think of Islamic terrorism, they think of Afghanistan, or maybe they think of some place in the Middle East, but the truth is that threat exists all over the world," he said, citing domestic terrorism in Nigeria.

The prime minister said home-grown Islamic radicals in Canada are "also something that we keep an eye on."

Harper said his government will bring back anti-terrorism clauses that were brought in in 2001 but were sunset in 2007 amid heated political debate.

There were two clauses at the heart of the debate:

One allowed police to arrest suspects without a warrant and detain them for three days without charges if police believed a terrorist act may have been committed.

The other allowed a judge to compel a witness to testify in secret about past associations or perhaps pending acts under penalty of going to jail if the witness didn't comply.

Neither clause was used by police or prosecutors in the five years before they expired.

In October 2006, a parliamentary committee recommended extending the two provisions.

The Conservatives put forward a proposal to keep the measures in place for three more years, but the three opposition parties united to defeat the proposal in February 2007 by a 159-124 vote.

The rest of the legislation remained in force.

Do you agree with Prime Minister Harper? Take our survey.

When asked by Mansbridge if he would try to bring those laws back, Harper replied: "That is our plan."

"We think those measures are necessary. We think they've been useful," he said. "And as you know … they're applied rarely, but there are times where they're needed."