Freddie Mercury of Queen is the Google Code. The lyrics for Killer Queen seem so apropos.

In a pretty cabinet

'Let them eat cake' she says

For Khrushchev and Kennedy

At anytime an invitation

Dynamite with a laser beam

Guaranteed to blow your mind

Recommended at the price

She never kept the same address

Met a man from China

Went down to Asia Minor

If you're that way inclined

for cars she couldn't care less

Drop of a hat she's as willing as

Playful as a pussy cat

Then momentarily out of action

Temporarily out of gas

To absolutely drive you wild, wild

She's out to get you

Recommended at the price

We are right on cue with this little number. It's the 65th anniversary of Freddie Mercury's birthday Sept. 5th. He was 45 when he died. The numerology is very clear 9/11. Of course his most famous band was Queen. Queens is one of NYC's boroughs. In the song Killer Queen there is a reference to Kennedy. JFK Airport is there and the Robert Kennedy Bridge is the conduit across the river. More frightening is of course Queens College which is adjacent 65th Avenue. It is the 65th anniversary. She's a killer queen with explosives. The borough was evacuated as well as we can see in the map below.

Queens College is part of the City University of New York.

For example, Queens College is situated at 65–30 Kissena Boulevard, and is so named because the cross-street closest to the entrance is 65th Avenue.

The reference to Kennedy and Kruschev heralds to a time when the world was at the brink of nuclear annihilation. Have we returned there again? Has the nuclear 9/11 been put on the table - dynamite with a laser beam?

Imagine, Mr. President, what if we were to present to you such an ultimatum as you have presented to us by your actions. How would you react to it? I think you would be outraged at such a move on our part. And this we would understand. Having presented these conditions to us, Mr. President, you have thrown down the gauntlet...

The Soviet government considers the violation of the freedom of navigation in international waters and air space to constitute an act of aggression propelling humankind into the abyss of a world nuclear-missile war.

Moet & Chandon Named The Official Champagne of the 2011 US Open

NEW YORK, Aug. 19, 2011 /PRNewswire/ -- Moet & Chandon and the United States Tennis Association (USTA) announced today that Moet & Chandon will be the official champagne of the US Open, aligning the world's most beloved champagne with one of the most prestigious and respected sporting competitions in existence. Moet & Chandon, the champagne of success and glamour since 1743, is enhancing its rich heritage as an icon of victorious celebration and global winning moments with this first foray in American tennis, beginning with the US Open, the largest sporting competition in the world. Together with the USTA, Moet & Chandon will offer a number of luxurious and charitable elements to tournament guests as well as to those cheering on the tournament stars from their homes.

Moet & Chandon Opens Doors: To celebrate its inaugural partnership with the US Open, Moet & Chandon, has arranged for 10 of New York City's finest restaurants that plan to screen the US Open, the opportunity to enjoy Moet by the glass and the opportunity to enter, via iPhone, a contest to win two tickets to the US Open to watch it live. And for those entertaining at home, fans can log onto Mymoet.com to order a limited edition crystallized US Open themed magnum to impress their guests.

Take the #7 subway to the Shea Stadium/Willets Point station. The USTA National Tennis Center is a short walk down the ramp from the station. There is a large Chinese population in Queens too. Asia Minor and China Town both fit the circumstances. The tounament ends on Sept. 11th. 9/11 figure in the anniversary numbers. Freddie was born 65 (11) years ago. He was 45 (9) when he died. 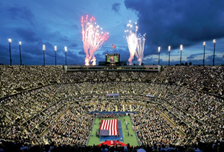 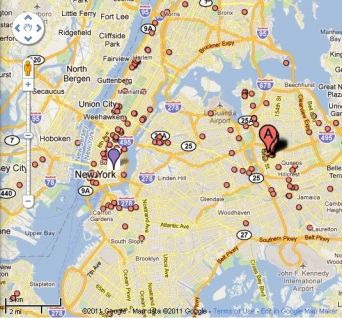 On this map the purple balloon is the Mercury Lounge.

The A is Queens College. The Mercury Lounge is a sports bar. Will they be featuring the U.S, open? Will they be serving Moet and Chandon? This establishment is not far from Grand and Columbia which was highlighted in the press already. The Brooklyn Navy Yard is across the river. Freddie had a remarkable range with his voice.

Although Mercury's speaking voice naturally fell in the baritone range, he delivered most songs in the tenor range.[23] His vocal range extended from bass low F (F2) to soprano high F (F6).[24] He could belt up to tenor high F (F5).[24]

The F Sixth Avenue Local is a rapid transit service of the New York City Subway. It is colored orange on route signs, station signs, and the official subway map, since it runs on the IND Sixth Avenue Line through Manhattan.

The F service operates at all times, from 179th Street in Jamaica, Queens to Stillwell Avenue in Coney Island, Brooklyn via Queens Boulevard, Sixth Avenue / 63rd Street, and Culver, making all stops except for an express section in Queens between Forest Hills – 71st Avenue and 21st Street – Queensbridge. During rush hours, Kings Highway is the southern terminal for some trains. 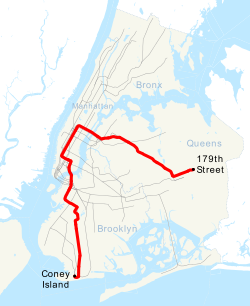 I hope you're getting the picture. F6 is the high end of Freddie's range and the name of the subway line through the borough and Manhattan. This stop is presently under construction. That's a common feature in a false flag attack. 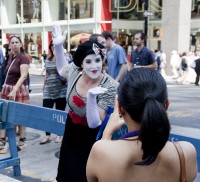 On Sunday, July 10, from noon until 5 o’clock, there was no revolting. Instead, New Yorkers willingly obeyed Marie Antoinette and ate. An annual free, French extravaganza, entitled Bastille Day on 60th Street between Lexington and Fifth Avenue, hosted approximately 60 vendors that stretched for three avenues. Loads of French culture, tempting smells of crepes topped with strawberries and nutella, live French music, and delicious French delicacies were bought and devoured by ecstatic crowds in Midtown.

Of course this gives us more locations to watch, but who would have thought Marie Antoinette was in New York recently. It is chilling all the similarities between the song and Freddie and the latest Google doodle. Wait! There is more. What famous American woman has acquired the handle of Marie Antoinette?

Sacrifice is something that many Americans are becoming all too familiar with during this economic downturn. It was a key theme in President Obama's inaugural address to the nation and he's referenced it numerous times when lecturing the country on how to get back on its feet.

But while most of the country is pinching pennies and downsizing summer sojourns - or forgoing them altogether - the Obamas don't seem to be heeding their own advice. While many of us are struggling, the First Lady is spending the next few days in a five-star hotel on the chic Costa del Sol in southern Spain with 40 of her "closest friends." According to CNN, the group is expected to occupy 60 to 70 rooms, more than a third of the lodgings at the 160-room resort. Not exactly what one would call cutting back in troubled times.

When you read between the lines, there's a lot you can read if you try. My hacking spy tonight is from the Netherlands. And don't forget the movie Two Minute Warning. This time it's tennis not football perhaps.

AND DON'T FORGET JORGE BORGES FROM THE OTHER CODE. HE WAS FREQUENTLY PHOTOGRAPHED NEAR A GLOBE.

# The following results may also be obtained via:

Comment: These addresses have been further assigned to users in