WHY DOES YOUR TV'S CABLE DVR USE MORE POWER THAN ANYTHING ELSE IN YOUR HOME 24/7? IT'S RECORDING YOU!‏

In yesterday's Sunday New York Times a front page story hyped the massive power drains of the modern digital TV formats we're being forced to switch to. I scratch my bald spot and wonder how that is necessary. When I put my car in the garage I would wonder why the engine is running at red line when I'm not driving it. When I find the gas tank near empty, I'd say I swear I turned off the ignition. What need would there be for the car engine to run at maximum if the car is parked. We ask no questions about our TV DVR's. What do they do? They record audio and video. They are connected via the internet to the cable companies which are already exposed as collection agencies for the intelligence agencies. Are you getting the picture? They're recording and storing everything about you with the flick of a button. What did your parents used to say? Don't take candy from strangers. It is still good advice. After they got caught they said it was a hoax tin foil hat conspiracy. If there's one thing I've learned over the years, the tin foil hat crowd are frequantly proved right. Remember before tin foil, the world was flat remember.

“If you hit the on/off button it only dims the clock, it doesn’t significantly reduce power use,” said Noah Horowitz, senior scientist at the natural resources council.

Cable boxes are not designed to be turned completely off, and even when in deep sleep mode, it takes time to reconnect and “talk” with their cable or satellite network, though that time is highly variable depending on the technology.

The perpetually “powered on” state is largely a function of design and programming choices made by electronics companies and cable and Internet providers, which are related to the way cable networks function in the United States. Fixes exist, but they are not currently being mandated or deployed in the United States, critics say.

Similar devices in some European countries, for example, can automatically go into standby mode when not in use, cutting power drawn by half. They can also go into an optional “deep sleep,” which can reduce energy consumption by about 95 percent compared with when the machine is active.

One British company, Pace, sells such boxes to American providers, who do not take advantage of the reduced energy options because of worries that the lowest energy states could disrupt service. Cable companies say customers will not tolerate the time it takes to reboot the system once the system has been shut down or put to sleep.

These set-top boxes are energy hogs mostly because their drives, tuners and other components are generally running full tilt, or nearly so, 24 hours a day, even when not in active use. The recent study, by the Natural Resources Defense Council, concluded that the boxes consumed $3 billion in electricity per year in the United States — and that 66 percent of that power is wasted when no one is watching and shows are not being recorded. That is more power than the state of Maryland uses over 12 months. 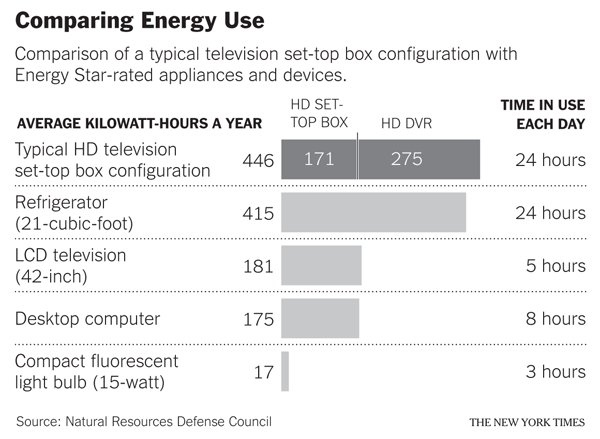 Your TV may soon be watching you Filed under: TVs and Video

It's not just movies that may be watching you, soon your TV may join in. The Japanese public broadcasting organization (NHK) has started testing out TVs with tiny cameras embedded into them, allowing your every facial expression to be monitored.

The idea behind this new voyeuristic TV is to determine if you are interested in what you are watching — be it a TV show or advertisement. It is hooked up to a nearby tablet PC that processes your facial expressions, and makes recommendations on shows and products based on your apparent interest.

While we are sure that this will be an invaluable tool for television producers and advertising executives, we doubt you'll end up seeing this in your home any time soon. After all, the last thing you want is Big Brother knowing you lip-sync to Glee.