Unbelievable! Court Rules US Taxpayers, Not BP Or Transocean, Are Liable For Gulf Oil Spill Clean Up Costs

Unbelievable! Court Rules US Taxpayers, Not BP Or Transocean, Are Liable For Gulf Oil Spill Clean Up Costs 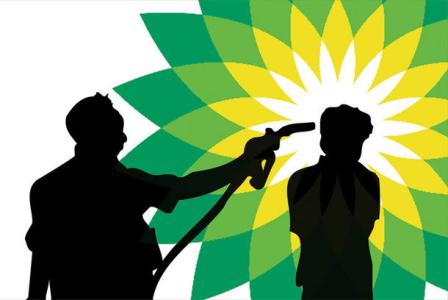 US District court has dismissed over 100,000 lawsuits brought against BP And Transocean to pay for oil spill clean up costs and environmental damages caused to the Gulf of Mexico from the BP Gulf Oil Spill. The court ruled that injury stopped the moment the well was sealed and the Federal Government, aka The US Taxpayer, is now liable for clean up costs along with any damages caused by deficiencies of the cleanup of the Gulf Of Mexico.

The US District Courts have ruled that since oil is no longer flowing from the Macando Well BP and Transocean are not liable for cleanup costs and damages from the BP Gulf Oil Spill since the “well has already been sealed and the injury has already been committed”.

In the ruling the court goes on note that Federal Government is in charge of the oil spill clean up efforts. Thus any damages related to the cleanup are now the burden of the Federal Government, meaning the US Taxpayer.

The ruling means that Taxpayers are not only liable for the clean up of the BP Gulf Oil Spill but it also means that any damages caused by deficiencies of the clean up in the Gulf is now also the responsibility of the US Taxpayer.

The lawsuits against BP have been bundled into separate packages with all of the lawsuits pertaining to BP’s liability for cleanup costs and environmental damages being dismissed with this ruling.

BP wins a big one in oil spill litigation

NEW ORLEANS – Ruling in favor of Transocean and BP, a federal judge on Thursday dismissed third-party environmental claims in a giant pleading bundle in the Deepwater Horizon oil spill litigation, saying the fact that the oil flow has stopped makes those lawsuits irrelevant.

“The injunction at this stage would be useless, as not only is there no ongoing release from the well, but there is also no viable offshore facility from which any release could possibly occur,” U.S. District Judge Carl Barbier wrote. “The Macondo well is dead, and what remains of the Deepwater Horizon vessel is on the ocean floor, where it capsized and sank in 5,000 feet of water.

“Moreover, BP and the agencies comprising the Unified Area Command have been and are cleaning up the Gulf of Mexico. An injury is not redressable by a citizen suit when the injury is already being addressed.”

Judge Barbier is overseeing the massive, consolidated oil spill litigation, which has been divided into “bundles,” based upon the nature of the claims.

In instances where claims in the D1 bundle pertain to how the oil is being cleaned up, Barbier ruled that even if he allowed those claims to go forward, the claimants are not directly involved in the cleanup, so a ruling in their favor would not affect how the cleanup is progressing.

“The D1 defendants do not unilaterally direct the cleanup activities in the Gulf; such activities have been under the control of the National Incident Commander, Federal on-Scene Coordinator, Unified Area Command, and the Coast Guard in cooperation with other federal agencies. Thus, plaintiffs cannot show that an order from this court would actually resolve [to the defendants for] any potential deficiency in the ongoing cleanup,” Barbier wrote.

“In order to prevail on their claims for injunctive relief, plaintiffs must demonstrate an ongoing violation of various statutes on which plaintiffs’ claims for relief is based. Because the Macondo well is dead and is no longer discharging oil, plaintiffs’ only claims are confined to seeking environmental citizen suit injunctive relief of a prospective nature to stop noncompliance in the form of a continued release of oil. Thus, the citizen suit claims brought by the plaintiffs are moot, because no future-orientated injunction can provide any meaningful relief for plaintiffs in terms of stopping discharges that already concluded in mid-July 2010.”

Transocean’s Deepwater Horizon drilling rig, operated by BP, exploded and burned 50 miles off the Louisiana coast on April 20, 2010, killing 11 and setting off the worst oil spill in history. [Hundreds of] Millions of gallons of oil were spilled in the next 87 days.

More than 100,000 people have filed lawsuits seeking damages from the spill.

The lawsuits dismissed on Thursday belonged to the D1 pleading bundle.

This was the first ruling arising from issues addressed during a May 26 hearing on the defendants’ motions to dismiss particular bundles.

Claims with varying types of damages were included in more than one bundle, depending on type of claim.

In dismissing the D1 claims, Barbier said the claims could still be heard if they seek damages for violations other than environmental claims.

“To the extent that plaintiffs assert claims under general maritime law and/or state law, the court will consider those claims separately when it addresses the pending motions to dismiss the B1 bundle master complaint,” Barbier wrote.

During the May 26 hearing, Barbier indicated that he might find the claims asserted in the D1 bundle were moot.

“The fundamental argument is that this is all moot because the well is sealed,” Barbier said.

During the hearing, Ervin Gonzales, of the plaintiff steering committee, said the cleanup has not been adequate and “the environment is suffering.”

Greg Buppert, an attorney for Defenders of Wildlife, told Barbier at the hearing that “the Endangered Species Act is not linked to the well spill; it is linked to the take of species.”

In response, Barbier cited the federal government’s investigation of the spill. Federal attorneys have said that criminal charges will be filed if the investigation turns up evidence of willful negligence by the defendants.

Because of the continuing investigation, the government has tried to keep certain issues undercover. For instance, autopsy results of the hundreds of dead baby dolphins that have washed up along the Gulf Coast have been kept private, and independent scientists have not been allowed to conduct their own autopsies.

“Isn’t that what the federal government is doing?” Barbier asked on May 26. “It sounds like you think they may not do it right.”

Later that day, Barbier told Buppert: “It’s speculative right now. You’re surmising that somebody is going to do something that you don’t like.”

Unbelievable. Shocking. The may need the entire congress to send twitter pics exposing themselves to distract the masses from this one. I guess the Judge believed that all of the oil magically disappeared from the Gulf the moment the well was sealed, just like the Federal Government told us it did. Never mind that fact that scientists reported the Feds confiscated the data of the underwater plumes and told the scientists to shut up about their research. Never mind the feds tried covering up the first plume that was discovered. You do remember that massive 22 mile long plume larger than the size of Manhattan don’t you?

And even after the Feds said they couldn’t find the oil the massive slick in the Gulf could still be seen from space. Then there were the fisherman that the Feds told to shut about the discovery of oil in Gulf seafood. Yep the damage, that all ended when the well was sealed, if what even sealed. Regardless of that debate that fact still remains that massive underwater lakes of oil are still in the Gulf and will remain there for years.

But none of that matters to our fascist government. Widespread sightings of oil washing up all over the Gulf continue to this very day. In fact NOAA has just recently confirmed a widespread “unexplained sickness” and lesions in sea life all across the Gulf that the Feds are desperately trying to keep a lid on.

That wouldn’t have anything to do with the almost 2 million gallons of the neurotoxin pesticide Corexit that was sprayed into the Gulf to limit BP’s cleanup costs for the Gulf.

Oh, the irony. Would BP have sprayed all of those toxins into the Gulf if they knew that the Federal courts would just let them off the hook for the clean up costs? The Feds would have never of needed to lie about the lethality of Corexit because the public couldn’t handle the truth.

The Irony. The Fascism. The Greed. The Corruption.