Where there's smoke peat moss and raccoons for D Day‏ 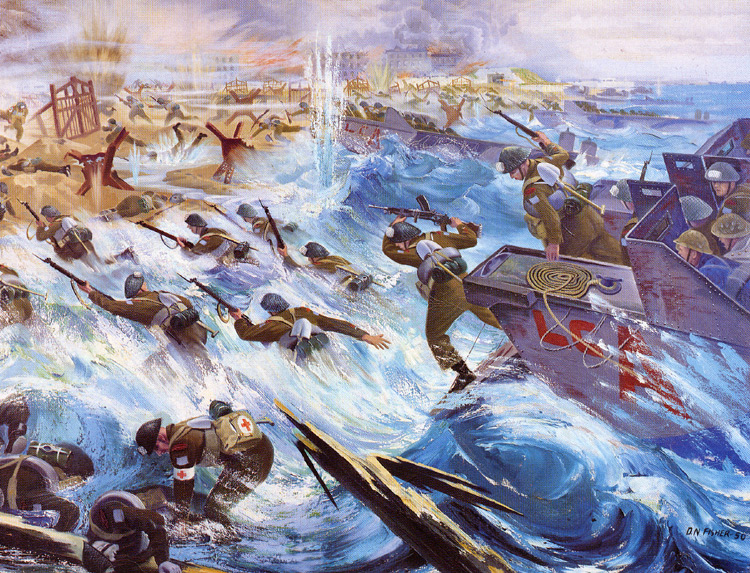 I realize it takes two generations to forget. Perhaps even less if no one remembers, but as a publisher I feel you have a moral duty to keep our history alive to inspire the succeeding generations with the awe inspiring deeds of their forebears.

On D Day the 6th of June your cover story was about a peat moss fire and the infamous raccoon saga. I realize I'm getting older and my memories go back to the day when our veterans were our most productive members of our society. I leave my house under the watchful eyes of my grandfather Rifleman Frank Mus of the Regina Rifles Regiment a D Day veteran. I see the world's media has shuffled the story off towards the classified. Save for the History Channel and a few notable papers the event has been swallowed up in the memory hole.

If I may be so bold, your front page should have blazoned this image of the Regina Rifles storming the beaches with this recent art work.

Not that I have anything against raccoons or safety issues regarding peat moss, but there sure was a lot of smoke over Juno Beach that year. 458 Regina Rifles never came home after that war. In the fight against fascism they were a small fraction of the 60,000 plus who met the same fate.

My grandfather came to Canada from Poland to help build this country as an employee of the Canadian Pacific Rail Road. When Germany invaded Poland he was on the doorstep of his regiment before war was even declared. They sent him home to wait for the call. Later a truck came by the house and a man asked, "Where's Frank?" "At work," his wife replied. The five year journey had begun. The family moved to Truro, N.S. to be nearer to him while he trained. He never would have been called up. He was in his 30's and had four kids.

Frank didn't talk much about the war. He spoke several languages and scouted for the regiment with our first nation soldiers. His role was the Bren Gun. He landed on Juno Beach and lasted all the way to Holland where he was wounded by a German mortar bomb. His faithful Indian companions were both killed. He was lucky the doctors saved his legs so he could return to a productive life in Toronto building tractors at Massey Harris.

The King of England shook his hand as well as all the other boys who went over there. He appreciated their ability to put out the fire under the smoke.

His combat seasoning didn't go to waste back home either. One day while taking the ferry to the islands a man was drowning near the dock. He jumped off the ferry and pulled him out. That torpedoed ship training wasn't wasted. You had to dive off the deck with your full kit. They wanted you to hang on to it all too. Several men died during that training. One Toronto man was saved.

Many years later a thug decided to rob a helpless senior after he came out of the Polish Credit Union on Roncesvalles. The thug stuck a gun in his ribs and demanded cash. The rest was a blur. He picked him up with two fingers in a carotid pinch. The guys feet dangling as he passed out. Then he punched him the face breaking his nose and removing a few teeth. Frank had an awesome mitt. I remember the police bringing him home and gramma telling us not to look. We struggled for position in the window. There were two of Toronto's finest sitting on the porch rolling with laughter at how an idiot bit a Polish lion. They used to call that community policing I imagine. In the era of controlled thought you'd be labelled a vigilante. The boys fought for the understanding that the government is the people and the tip of power rests in their hands.

I digress but it is a viable history lesson our children are unaware of. The doctor at the prison camp at the River Kwai immortalized in film was a Torontonian. He gave a thorough speech at The Canadian Club about what we fought for. His name was Dr. Jacob Markowitz. The Canadian military wouldn't take him because he was Jewish. He joined the British Army instead. He sailed across on a tanker. His colleagues didn't. They were all lost when their freighter was torpedoed. Dr. Markowitz's specialty was unconventional improvised medicine. What luck for the prisoners. You won't learn that in school, but the newspaper could be the difference.

It's good to see that your religion doesn't matter anymore. Frank didn't care about the doctor that put him back together again. They built a better world all of them. We should never let the opportunity to remember escape. There were many battles, but D Day must never be forgotten. In my own humble way as the host of Toronto's most avant garde media program Conspiracy Cafe on That Channel, I'll do the boys justice. When I speak to the world as a regular on one of America's top talk shows four 100 thousands watt transmitters will remind the world that their's was not in vain. I'll scratch my head and wonder how the politically correct dominate thoughts and hope Orwell was wrong knowing in my heart it's a never ending struggle. In this war all we have to do is change the channel lest we forget and have to storm the beaches again. Rifleman Frank Mus Regina Rifles Regiment in the Bren Gun carrier on the right above the number 5. Rifleman Bob Gurney is on the top left of the left Bren gun carrier over the number 5. He was captured shortly after D Day and shot to death by the Germans.

Mr. George Freund has started a blogspot for the posting of pictures from the family collection. They are much higher resolution and will be expanded as they are recovered. The image above returns in the first tier of an image search. Come visit this site below for the collection.