In 2006 I was reporting on a show called Exposed @ www.spyman.ca. A group of Russian eco tourists were arrested with a fishing boat, a luxury yacht and a mini sub. The Ecuadorian Navy was right on the ball. They arrested the ships and the men. The day we broadcast a volcano warning the earth shook as we went on line with the show. There are many angles of covert attack and too few to see and understand. We were on board with the news then. Stay on board Conspiracy Cafe. We're your only hope in a dangerous world from my memory hole to yours.

Recently a group of eco-tourists were arrested en route to the Galapagos Islands. Of immediate concern was the fact that they were carrying a submarine with them. The mixed Russian English nationalities attracted attention to this author as well. The Ecuadorian Navy arrested the ships, the sub and the men. 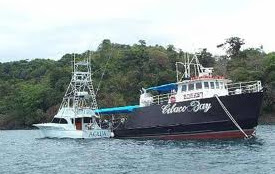 The submarine was a mini-sub operated by Silvercrest Submarines of the UK. Their website revealed that they are underwater specialists. They have research subs, tourist subs, ROV's, etc. They can travel anywhere in the world. However, their tourist sub was on the crane of the mother ship the Cebaco Bay. In fact the sub dangling on the end of the cable was remarkably alike the ComSub which is a two man sub. However, there were 24 Russian tourists paying for an eco-adventure in the Galapagos Islands. Fitting 24 men in a two man sub would probably be the adventure of a lifetime.

I smell a covert ops extraordinaire. In the Indian Ocean tsunami there is has been a strong opinion that the tsunami bomb developed in WWII was used in a deep trench. USS San Francisco came to the surface later with severe bow damage. Was it involved in black-ops? Remember Exposed revealed that Glomar Explorer was refitted and sent out to sea for oceanographic research. That ship was a specially fitted CIA ship made to retrieve a Russian sub lost in the Pacific. In early 2004 the commander of the Gibraltar naval base Commodore David White died in his swimming pool. Shortly thereafter HMS Sceptre returned to port with damage. Gibraltar is the nearest base to the Canary Islands where another piece of real estate is extremely vulnerable to a blast created tsunami that could take out the whole east coast of North and South America.

The Galapagos Islands are no different. They are situated on a major fault line. There are six active volcanoes on the island of Isabella. There is a caldera that is vulnerable to collapse that could precipitate another tsunami.

Silvercrest Submarines used Panama Yacht Tours to acquire the mother ship Cebaco Bay. She was fitted out to do the ultimate in deep sea fishing – the reeling in of the big fish. Panama Yacht Tours have an uninhabited island named Cebaco Bay as well. Eight British citizens were in control of the mother ship and sub. The Russians were on another ship called the Constellation. They fled and were arrested in Panama. I speculate any evidence was deposited into the sea as they fled. They have a great cover story. Hardly anyone knows about the research and development of the tsunami bomb. Hardly anyone could speculate that such weapons could be used, but in the days of extreme covert wars such weapons are dreams of the forces competing for global control.

In a related coincidence the head of the Russian Navy Admiral Vladimir Masorin was involved in a plane crash in the Crimea while en route to Black Sea Fleet manoeuvres involving the rescue of a sunken submarine. There were 24 Russians involved in this eco-manoeuvre remember. So as a result of actions by the Ecuadorian Navy, this summer's tsunami season has been cancelled. The 'rogue' elements of the intelligence agencies are best kept on a tight leash. Exposed is that leash. However, that was no protection because a volcano has erupted in Ecuador today as I finally got to writing this. Maybe covert actions were completed and these guys were the diversionary mission. Saturday the Tungurahua volcano erupted near Quito causing thousands to flee. It's not nice to screw with the intelligence agencies especially if they possess scalar weapons.

The Ecuadorian navy intercepted a mini-submarine and its support vessel, Cebaco Bay, in the Galapagos Islands, where the use of submarines is forbidden. As soon as the incident happened the nearby mega yacht MV Constellation with a small group of wealthy Russians took off, but was arrested when reaching the Panama canal .

The Independent writes about the incident:

“Lawyers are heading out to the islands, but the status of the Russians’ hired super- yacht is less clear. The 24 Russians are believed to have paid $120,000 (£65,000) for a four-hour voyage around the islands, and even paid for the mini-submersible to be specially flown out for the trip south.

… The incident has highlighted an growing problem for the Galapagos: the dangers posed to its unique and highly sensitive flora and fauna from a dramatic growth in “green” tourism. This week, the UN will hear demands by ecologists for the Ecuadorian government to enforce stricter controls on tourism, illegal fishing and economic development in the archipelago.”