The Mysterious Demolition Truck On London's 7/7 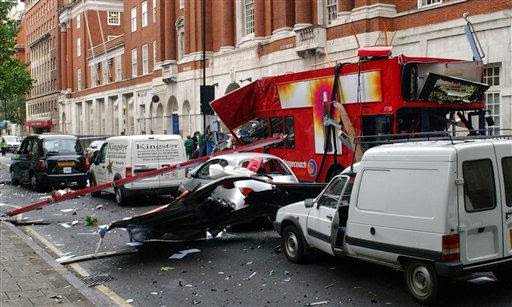 There can be very little doubt that 'terrorism' is a carefully staged event carried out from the highest levels. As a case in point very, very few pick out the fine details in the visual record and ask questions. The pictures of the destroyed transit bus on 7/7 were seen by untold millions, but no one really made an issue out of the white van beside the bus belonging to a demolition company except me.

The white van on the left is owned by Kingstar a demolition company of unparalleled ability. The Jaguar at the top of the frame was removed on a trailer for some strange reason. A witness described being tailed by two vehicles.

The witness, named "Daniel", has a blog here and a website here. He states:

I was aboard the lower deck of the bus that was blown up on July 7th. I rang the emergency hotline to report the 2 dark cars I saw holding the bus up and diverting it towards Tavistock Square. Instead of being asked to provide a statement what followed was 7 months of police surveillance and Harassment. My experiences are contained in a book called Statement: The 4th Bomb (as yet unpublished)

Standing by the doors I see a blue BMW 5 series and black Mercedes squeal to a halt in front of the bus, halting its progress along Euston Road. 4 minutes passed then a police motorcyclist arrived at the blockage. The BMW driver said something to the cyclist who soon sped off. 90 seconds later the BMW suddenly drives off. The Mercedes waits till the bus diverts east into Upper Woburn Place towards Tavistock Square before it speeds away.

After very slow progress the driver suddenly opens the buses central exit doors while keeping the front doors shut, right on the corner of Upper Woburn Place some 80 meters away from the only bus stop in Tavistock Square (seen here). Many passengers got off at this point because of the delay and it was heading in the wrong direction.

A deep boom resounded. Shattered glass flew everywhere. It was followed by an eery silence. I scrambled up off the bus floor and leapt out going along the pavement at full pelt. But over the following days and weeks the relief I felt turned to exasperation at the increasingly menacing tactics the operatives' trailing and observing me employed, confirming my worst suspicions, for some reason I was embroiled in the largest criminal investigation in UK history. This close up view gives a very clear description of the van and the company Kingstar.

Manufactured by Brokk, our fleet of remote controlled machinery provides the ideal solution for most controlled demolition projects.

With a small footprint the machines can be operated in confined spaces and provide massive productivity gains compared with traditional methods. The operator controls the machine remotely from a safe distance. From the Brokk 40 to the Brokk 330 we have the solution for you.