From the first volume: 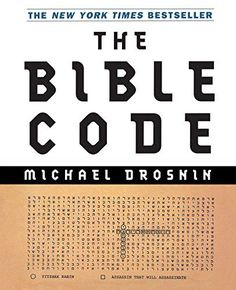 Has the End been "prevented" or only "delayed"?

When Moses tells the ancient Israelites what will happen in the "End of Days," the hidden text appears to say "delayed."

In Deuteronomy 31:29, Moses' warning that "evil will befall you in the End of Days" is preceded by a hidden text that states, "You knew it will be delayed."

And in Numbers 24:14, where the sorcerer Balaam foretells the "End of Days"-the words that are encoded with both "atomic holocaust" and "World War"-the hidden text states "friend delayed." 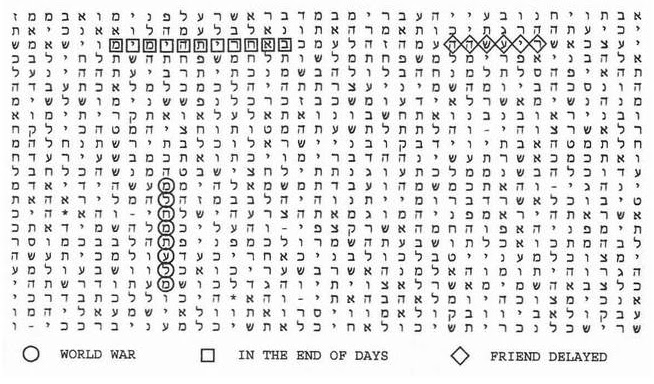 "Friend delayed" overlaps "fire shook the nation." And the hidden text in the same verse also states "I will advise you what" and "I will advise when." The "friend" is not identified. But he appears to be whoever encoded the Bible.

It is not yet clear if the End will come, when the stated delay will be over, but one thing is clear-"delay" is written into all the original prophecies of the "End of Days."

FRIEND DELAYS IN GERMAN FREUND (Who is the friend?)

That's why the millions I influence on radio are so important to me. What if that's me? Regardless if you got the ball you run with it. The referees can call back the play if they must. This is too important to mess up.

In Bible Code III many dire circumstances are upon us.

Obama will start a war in 2011. Sounds familiar.

There is a nuclear weapon in Yemen. New York and Washington are at risk. The White House is building a secret addition. Could it be a bomb shelter?

The economic collapse will happen in 2012. Odds are looking pretty good on that.

Obama will win the next election and be sworn in in a nuclear bunker. Sarah Palin will lose for the Republicans.

The odds are against because we refuse to look at the cold hard facts in the greatest time of need.

4“But as for you, Daniel, conceal these words and seal up the book until the end of time; many will go back and forth, and knowledge will increase.”

6And one said to the man dressed in linen, who was above the waters of the river, “How long will it be until the end of thesewonders?”

7I heard the man dressed in linen, who was above the waters of the river, as he raised his right hand and his left toward heaven, and swore by Him who lives forever that it would be for a time, times, and half a time; and as soon as they finish shattering the power of the holy people, all these events will be completed.

8As for me, I heard but could not understand; so I said, “My lord, what will be the outcome of these events?”

9He said, “Go your way, Daniel, for these words are concealed and sealed up until the end time.

11“From the time that the regular sacrifice is abolished and the abomination of desolation is set up, there will be 1,290 days.

13“But as for you, go your way to the end; then you will enter into rest and rise again for your allotted portion at the end of the age.”

We are in the minority that can see what's coming. God says the wicked can't see. That explains it I fear.

I believe Exodus 36 is the encryption key to the Bible Code. The temple is seperated from the Holy of Holies (secret of secrets) by a veil (encryption key). The key has always been in plain sight. When the temple is made it looks like a CPU Central Processing Unit of a computer. When you see it, you know what it's for. In fact I dare to say if we built it, we'd have a receiver from God.