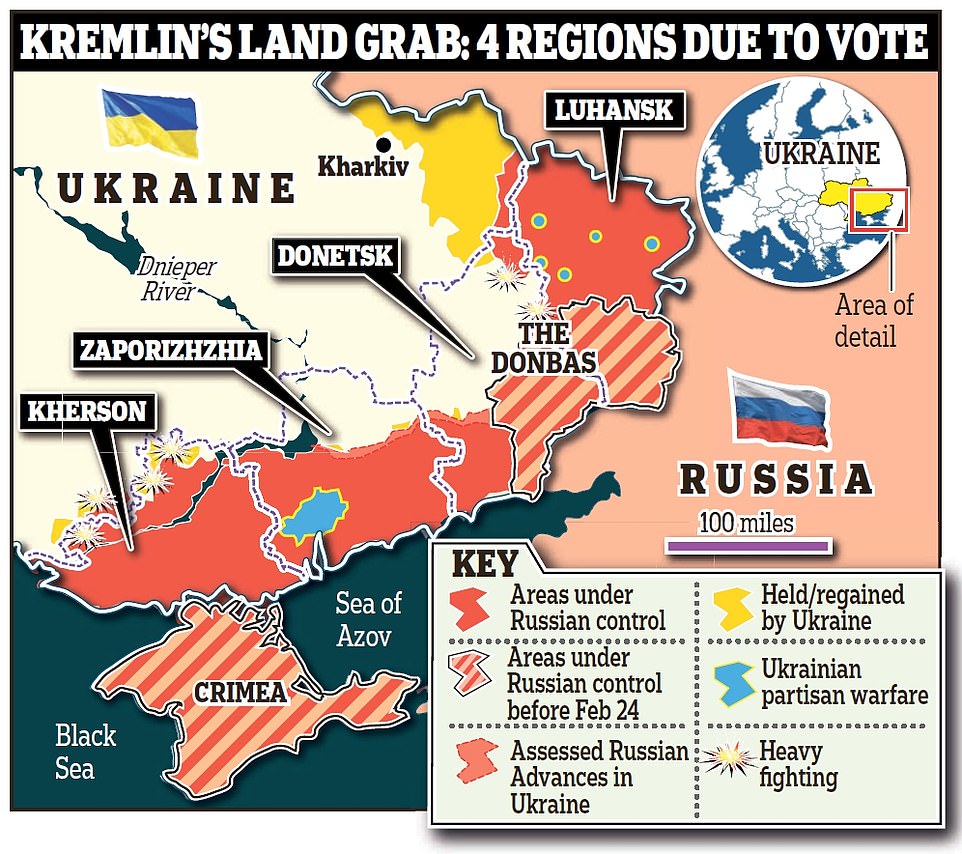 Vladimir warns Ukraine's allies he will use 'weapons of destruction', announces mobilisation of another 300,000 troops and declares 'I am NOT bluffing'

Vladimir Putin has threatened the West with nuclear weapons over Ukraine, telling leaders: 'I'm not bluffing'

Occupied Ukrainian territories will be annexed to Russia, he said, and 'all means' will be used to defend them

Ukraine dismissed the threat, saying it is 'predictable' and shows the war is not going as Putin had planned

Scroll down to read Putin's address in full

Vladimir Putin today issued a chilling new threat to use nuclear weapons against the West, telling world leaders to back off Ukraine while warning: 'I'm not bluffing'.

The desperate despot also ordered the mobilisation of 300,000 military reserves - a first in Russia since the Second World War - and gave the go-ahead for referendums to be held in occupied areas of Ukraine that would make them a part of Russia, in the Kremlin's eyes at least.

He vowed to use 'all means' to defend the regions, saying: 'If the territorial integrity of our country is threatened, we will use all available means to protect Russia and our people - this is not a bluff... I shall stress - by all means available to us. Those trying to blackmail us with nuclear weapons should know that the tables can turn on them.'

Putin's gambit comes after Ukraine routed a large part of the Russian army last week, leaving him backed into a corner of his own making and facing the possible collapse of his so-called 'special military operation'.

But rather than back down, the Russian leader has instead chosen to double down and hold the free world to ransom - putting Russia and its huge nuclear arsenal on direct collision course with Ukraine and its allies, who have already vowed not to accept the results of 'sham' referendums or to stop liberating occupied territory.

Speaking ahead of Putin's speech last night, President Zelensky dismissed 'noise' from Russia and said it will not alter Ukraine's resolve. Foreign Minister Dmytro Kuleba likewise vowed: 'The Russians can do whatever they want. It will not change anything. Ukraine has every right to liberate its territories and will keep liberating them whatever Russia has to say.'

Mykhailo Podolyak, an adviser to Ukrainian President Volodrymyr Zelensky, spoke out this morning after Putin's announcement - calling it 'predictable' and saying it show the war is not going to plan. President Joe Biden is expected to give a speech to the UN later today when he will rally Ukraine's allies to stay the course.

IN FULL: Putin's address to the nation

Russian President Putin gave his first address to the Russian nation since the start of his war in Ukraine this morning - mobilising his military reserves and issuing a fresh nuclear threat to the West.

The despot gave his own twisted version of the war to date, painting NATO as the aggressors, saying the Ukrainians are torturing their own civilians, and that Western leaders are plotting the destruction of Russia itself.

Here is his speech in full:

Citizens of Donetsk and Luhansk, the People's republics of Kherson and Zaporizhzhia, and other people free from the Nazi regime.

We will be talking about steps of protecting our sovereignty, the will and desire of our citizens to determine their own future, and about the aggressive bloc of Western countries that are trying to keep their supremacy at all costs - that are trying to block and suppress any independent centers of development in order to force their will in brutal ways on others.

The aim of the West is to weaken, and destroy. They are openly saying that in '91 they managed to split the Soviet Union and now is the time for Russia itself.

Russia will be split into many regions and areas which are fighting each-other to the death.

They had these plans for a long time. They supported bands of international terrorists in the Caucasus. They are encouraging NATO to come to our borders. There is total Russophobia and many years of total hate for Russia.

First and foremost this is in Urkaine. They made the Ukrainian people cannon fodder and pushed Ukraine into a war with our country

They started the war already in 2014, using the army against the civilian population, and organising genocide, a blockade and terror against people who refused to acknowledge Ukrainian power as a result of a military coup.

As usual, they refused a peaceful solution of the Donbas issue and started claiming the right to use nuclear weapons. It became clear as before, a second large offensive in Donbas is inevitable and the decision of a pre-emptive military operation was the only decision and absolutely necessary.

The main aim of freeing the whole of the Donbas remains without change.

The occupation regime has made deep line of defence and therefore the part of our army and Donbas military units are using technology and people, and are freeing the Donetsk People's Republic step but step, village by village, and helping people turned into hostages by the criminal regime

As you know, the professional army is taking part in the special military operation, however volunteer units are fighting alongside them.

They have different nationalities, professions and ages. They are true patriots, protecting Russia and Donbas through the call of their hearts.

The Ministry of Defence was instructed by me to determine as soon as possible the legal status of these areas and also the status of the units of the Donetsk and Luhansk people's republics.

They have to be the same as the professional military of the Russian army, including social guarantees, medical and financial supplies.

We need to pay special attention to the procurement of the units of the Donbas using technology and munitions.

Our army, based on the decisions of the Ministry of Defence and the general command, have freed from the neo-Nazis the considerable territories of Kherson and Zaporizhzhia.

But it was obvious the West was not happy with a peaceful decision, so after reaching certain compromises Ukraine was effectively given the direct order to undermine the negotiations.

The Kyiv regime started using new bands of foreign mercenaries and nationalists, and the army was trained by NATO standards and actually commanded by western commanders.

The repression regime intensified across the whole of Ukraine by its military who, in 2014,used the politics of terror and intimidation. It becomes more and more barbaric and terrible.

The Banderas [supporters of a far-right Ukrainian leader] and the Nazi mercenaries are torturing the peaceful citizens.

In the Donetsk and Luhansk people's republics, Zaporizhzhia and Kherson over 7.5million people lived before the start of the operation.

Many were forced to become refugees, those who remained are constantly bombarded by rockets and artillery on the part of the neo-Nazis who attack hospitals, schools and create acts of terror against peaceful citizens

We have a moral right to give people that are dear to us, who are being tortured, we need to give them a chance to determine their own fate.

The parliament of the LPR, and the DPR, and the Kherson and Zaporizhzhia regions have decided to hold referendums on joining Russia and have asked Russia to support such a step.

I stress that we will do all that we can to create safe conditions to hold the referendums, so people can express their will and decision about the future. They will be supported by us.

Dear friends, today our army is directing at the frontline exceeding 1000km, and they are facing not just the neo-Nazis but the collective military machine of the whole of the West.

In this situation, I deem it is necessary to make the following decision which is appropriate to the threat we are facing.

In defence of our motherland, to ensure its safety, territorial integrity, security of our people and in the free territories I deem it necessary to support the decision of the Ministry of Defence and the general command for a partial mobilisation held in the Russian Federation.

I stress that it is partial mobilisation. Only those who are currently in reserve will be conscripted, and also those who served in the army and have certain military skills. They will be given additional military training, taking into account the special military operation.

The decree has been signed, officially the chambers of the federal assembly and Duma will be informed.

The mobilisation will start today on 21st September, I task the heads of regions to provide all necessary assistance to military commissioners. I stress that Russian citizens called up as part of mobilisation will be given all the guarantees, all the benefits of those serving under contract

The decree of partial mobilisation includes additional measures to safeguard the state procurement for the defence concerning military technology, and additional capacities for its production.

All the financial matters for supplying defence factories shall be resolved without delay.

In its aggressive anti-Russian policies, the West has crossed all lines.

We constantly hear threats against our people and some irresponsible politicians in the West are talking about not just providing Ukraine with long-range military systems that will be able to hit Russia - that is already happening, we're talking about the border regions, in Belgorod and systems using strategic drones, planes, doing reconnaissance across the south.

There are plans in Washington and Brussels to move the military action on to Russian territory.

The Zaporzhzhia nuclear power plant was shelled. Also the high representative of leading NATO states were saying that it might be permissible to use nuclear weapons against Russia.

Those who make such statements will be reminded that our country also has various weapons of destruction and with regard to certain components they are even more modern than the NATO ones.

If there is any threat to the territorial integrity of our country and to protect our people we will certainly use all means available to us. I'm not bluffing.

Russia citizens can be certain that the territorial integrity of our motherland, our independence and security will be assured. I shall stress - by all means available to us

In our historic tradition our people had it in their destiny to stop those how are trying to subjugate our motherland and it will happen now.

I believe in your support.

The defense readiness condition (DEFCON) is an alert state used by the United States Armed Forces.

The DEFCON system was developed by the Joint Chiefs of Staff (JCS) and unified and specified combatant commands. It prescribes five graduated levels of readiness (or states of alert) for the U.S. military. It increases in severity from DEFCON 5 (least severe) to DEFCON 1 (most severe) to match varying military situations, with DEFCON 1 signalling the outbreak of nuclear warfare.

DEFCONs are a subsystem of a series of Alert Conditions, or LERTCONs, which also include Emergency Conditions (EMERGCONs).