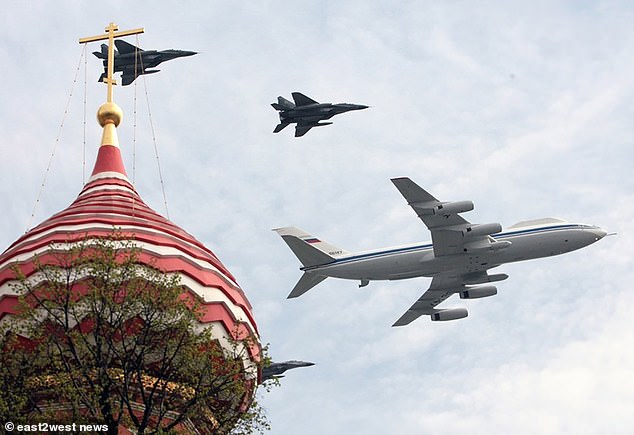 Fears of nuclear conflict increased when he threatened NATO with 'consequences' if it intervened in the war, and put his nuclear forces on standby

Now, a source has claimed he has told his close allies to prepare for nuclear drills

A 'depressed' Vladimir Putin is 'set to hold a nuclear evacuation drill' having 'moved his family to a 'secret underground city' with the Kremlin's doomsday plan, insider sources have claimed.

One source that previously said Putin is suffering from multiple and serious medical problems, and also claimed that Russian death toll in the Ukraine war was higher than even Kyiv's estimates with over 17,000 casualties in 23 days of fighting.

Putin 'often pours his anger out on those close to him,' the latest account said from the source - a Telegram channel supposedly linked to an ex-Kremlin intelligence insider who claims to retain close links to those in Putin's circle.

'He has no deep conversations with almost anyone, and limited contact even with his children - not only his [adult] daughters but also his [undisclosed] children with [Olympic gold medal winning gymnast, 38] Alina Kabaeva'.

The source said that Putin shocked his top generals recently by demanding nuclear drill be undertaken, increasing fears he is preparing for a nuclear conflict.

Another Russian expert has previously claimed that Putin has moved his family to a secret location that is not just a bunker, but a huge underground city, in order to keep them safe from a potential nuclear fallout.

Putin previously threatened NATO allies with 'consequences greater than any you have faced in history' should they intervene in the Ukraine conflict, and placed Russia's nuclear forces on high alert earlier this month.

A couple of years ago radio equipment was stolen from one.

Reports say unknown thieves broke into the Ilyushin Il-80 plane at an airfield in the southern region of Rostov.

It is unclear when the incident took place, but 39 units of equipment and five radio boards were taken.