Google has outdone itself here. In the form of the benign, they have offered a glimpse of the sublime. The small primates hinted at something much deeper than a simple salad from South East Asia. Som Tum is a very popular dish in Thailand and Vietnam and vicinity. So is the Macaque. Among some circles it is a delicacy to go with the salad. Monkey brain is such a delicacy. It is eaten from the bashed skull. It is a horrific end to the creature.

Genetic experiments are being conducted at the Shenzhen Institutes of Advanced Technology (SIAT) in China. They breed the Macaques and sell them to labs all over the world. They operate on their brains researching autism. They use CRISPER technology on a gene called Shank3. The research is thought to be unethical in the U.S. perhaps. That makes China a neuroscience option. Human rights are minimal. Animals have less of a chance.

They used in vitro fertilization to make 5 genetically modified Shank3 specimens. The McGovern Institute for Brain Research received 350 million dollars for the research. The University of Pittsburgh and SUNY Upstate Medical University also contribute. However, I question the research. The Maqaque has a brain similar to humans making it good for simulation. I hope and brain there isn't a military application in regard to actually modifying human behavior. That has been the long term goal of many regimes including the U.S. 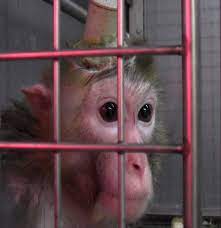 They are doing experiments in the UK too. The doodle says lime E. When consuming monkey brain the animal is held within a table and the skull is pounded.

So in effect the doodle is telling us we're involved in brain salad surgery. We also hope there will not be an 'accidental' release like some other recent catastrophe. The twilight language cannot conceal. It reveals. Everything is coded into everything. That is the holographic universe. We can hope and fear the end of the line is a human application to the order that controls us. It is the sum of all toms.