This is a Twilight Zone Google doodle. We have wonder why they select the various things to study. Are they warning us of impending doom, or are the flaunting the power the military industrial complex has over us? A Sunday Afternoon on the Island of La Grande Jatte is a masterpiece created by Georges Seurat. There are two radically different studies on display. The one at the Art Institute of Chicago is rather benign. It is great, but it is just a painting. The final study at the Metropolitan Museum of Art in New York City is the coded version with the message of the shadow people. They are here. They walk among us. They are seen but not noticed. They can move through time and space. Seurat has observed them and recorded their presence for a future time when someone may see that in the mid 1880's Georges Seurat described digital imaging and the megapixel with his brush. He framed the invaders to our dimensional realm in a multicolored hue forming a window on the world where windows take a different form. 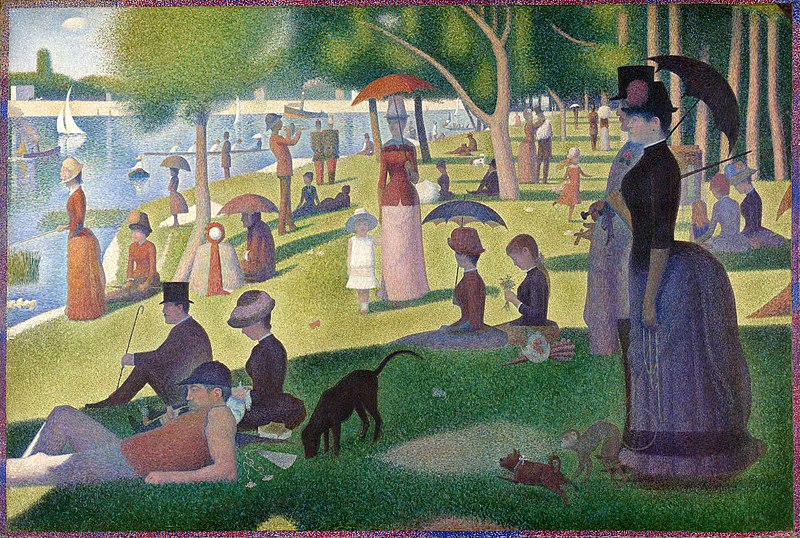 The earlier study which is displayed at the Art Institute of Chicago is a great painting it is art in its finest form. However, all through history art has been coded with pictures within pictures to allow information to avoid censorship and punishment especially in times of war. I used to think confiscating works of art were just plain theft until I learned of their value as a means to another end encoding. 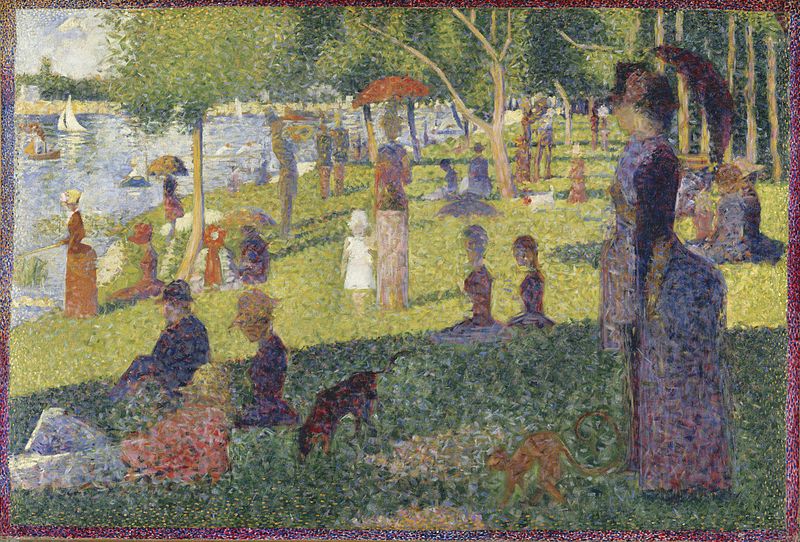 This final version of A Sunday Afternoon on the Island of La Grande Jatte contains the hidden features Seurat was sending through his time capsule of canvas to a future time when Windows and megapixels would be understood. The difficulty is that people have eyes and seldom see. It is more the duty of the visionary to see the nuances. Perhaps Comrade Google was hoping to warn an unsuspecting world the time is nigh. Perhaps you still haven't seen the embedded figures and symbols. We do need more magnification here. We see the bird entering paradise on the seine from the sky. The other work just displays a cloud. In our day the cloud has a new connotation. It is the place of the other dimension behind the invisible wall where data is stored a sort of metaverse you may be either permitted or captured to enter. The framing barrier was depicted in the 1375 Catalan map depicting the land of GogiMagog. 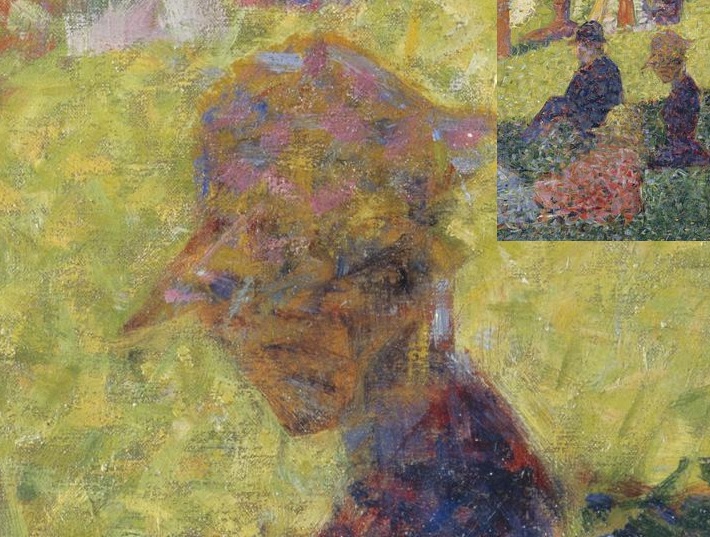 There is something Georges has seen on the Ile de La Grande Jatte that shouldn't be there. The woman with the hat isn't a woman. It isn't human either. We have unexpected company in our dimensional plane. It is one of what has been termed shadow people. He paints many of the figures in the shadows. It has a pointed nose and close set beady eyes. A human face is concealed underneath in a contorted manner signifying it moves among us as one of us. We are under the influence of monsters, and most everyone is unaware and going about their business. Georges has screamed in warning with his keen eye and stroke of the brush. I see and heed the message. C'est la guerre. They are invading our Eden for nefarious purposes. Maybe they are our alleged masters. Maybe they are conducting a medical experiment upon us to render us more like them.

Haim Eshed the former head of the Israeli Space Agency made just this claim in his recent book. Israel signed a treaty with the 'aliens.' So did the United States as well. Unlike the fake moon landings, that was not news. Included in the treaty was a requirement to conduct experiments. The greatest experiment ever conducted in human history is well under way. The only choice is testing mRNA technology and joining humans to the cloud in the hive mind. Those that cannot or will not adapt will be exterminated. I look at the so called treaty as an instrument of surrender. I would speculate these creatures have been hostile pretty much forever. They have been the cause for wars and conflicts. They are without emotion. They are psychopathic. 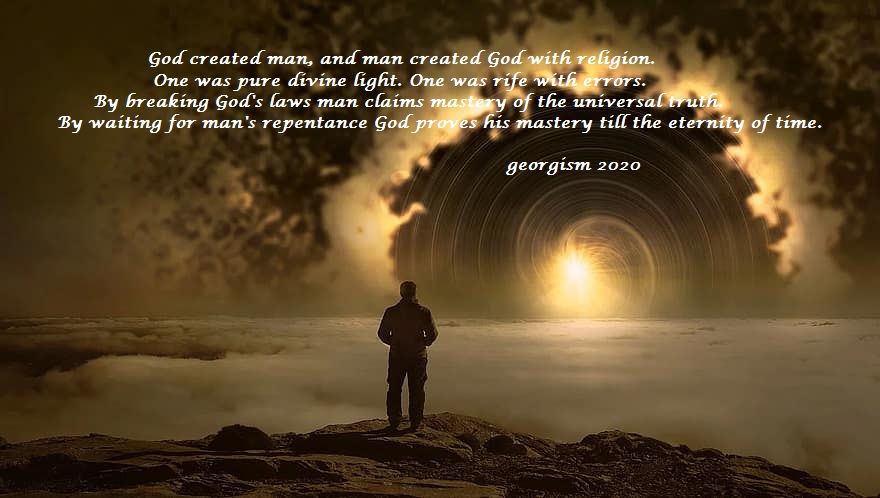 The prophet Ezekiel said there was only one possible way to defeat them. That was to return to the father. God would destroy them. 1 Samuel 8 reveals the error of our ways. If we choose a king, God turns away from us. That is why we are in the mess we're in. God created man, and man has created god. In our limited understanding of things, ours is more powerful. Nothing could be further from the truth. Christianity has had many poor translations of the father's language. From these errors, they have created doctrines. I use Jesus logic. If the truth sets us free and we claim to have it, they why are we not free? Either there is no truth, or we do not possess it. Since we are moving further away from freedom, it is blatantly obvious. An old saying is it doesn't matter how hard you row if you're rowing in the wrong direction. We are.

As a case in point Christians believe they are born of the water which is mayim in Hebrew. You are not born of water. You are born from water if mayim refers to amniotic fluid. Mayim means urine and semen too. You are born of semen. It was a man's world then I'm afraid. You cannot enter the kingdom of heaven if you weren't born of the mayim as in through sexual relations and of the holy spirit. You must have a soul. If your soul is captured through wanton manipulation of your DNA, they you are barred from it. That is the game plan. This is a soul harvest. Satan is taking control as the last act of defiance against the father and his son Adam. If we atone for ours turning away, we will be saved. If we don't unimaginable hell awaits us. The demons are already here. Google is announcing it fresh. They arrive from the Windows as bot armies. They are more plentiful than grains of sand on the seashore. I am fully prepared to return to the father for protection and guidance. It was never my mistake. Generations have been deceived. Revelation said only 144,000 would be saved. With this marker, I find the number exceedingly high. Man's weakness is the inability to admit he made a mistake. Under the circumstances that's an easy one.