Welcome to the surreal world of the military information complex. For those who have eyes to see, it is readily apparent. I cannot fathom how any Christian or Muslim hasn't peaked at the sight of this Google Doodle Celebrating Lofti Zadeh the great mathematician. One of the primary end times words smacks you in the face. Lofti's eyes are open, but most people have theirs closed.

Gog is the long postulated word from scripture used in conjunction with Magog to signify the coming battle ot eternity. Nothing could be more clear. The sun is behind Lofti signifying the religion of the age of Ra. The three pyramids of Giza are pictured as well. They are in a graph. The small e representing the electronic dimension of cyberspace joins them. In their heyday, they were burial chambers that could form the pathway to the other heaven referred to in scripture. The remaining structures are all missing their capstones or benben. The benben are part of the Egyptian creation myth. They rose from the primordial waters of Nu.Nu is one of the eight deities of the Ogdoad. He is depicted with a frog's head holding the solar disc of the sun which is portrayed behind Lofti's head. It is very clear where we are being directed to from even this rudimentary analysis. The pathway to heaven has been opened and the war of gog and magog has begun.

I learned today that self replicating xenobots exist. They are smaller than nanobots and reproduce via friction from movement. I have said for a couple of years that we have been invaded by another form of life alien to the Garden. It intends to dominate all God created carbon based life in this dimensional plane. We are in a difficult position namely because we have no understanding of what the enemy is and what its order of battle might be. Since I have studied the words of the prophets, I know the objective and have a clear understanding of the battlefield. We are being returned to Egypt. Egypt in Hebrew wasn't the country so to speak. It is mitzarayim the narrow path between the two heavens. I would use the more modern term star gate. 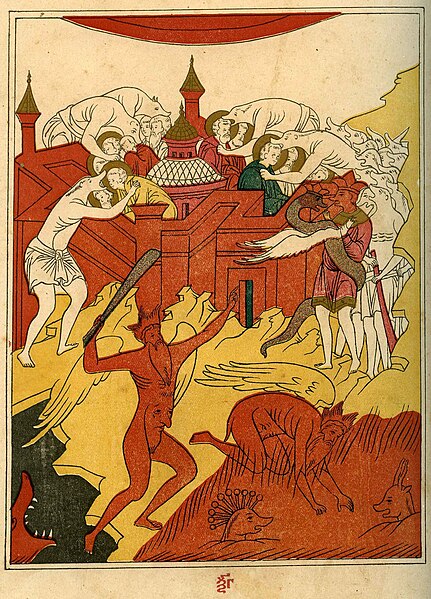 Devil, Gog and Magog attack the Holy City. (from a 17th-century Russian manuscript)

Over the years, people have argued and fought over all the misinterpretations. Overall, we were all wrong. We couldn't have known or understood the other dimension we term cyberspace. We couldn't begin to understand any computer never mind the central entity computer or the sentient world simulation. We could never contemplate our blood being changed in such a way as to turn humans into transmitters and receivers to these devices. We couldn't imagine having eternal life, but a life that isn't life. It is the soul in the machine. The trouble with people is we think repetition is both learning and knowledge. Repeating as the parrot is neither. We must be able to take the words and expand on them to suit our times and issues. That time is now and the issue is gog and the recapture of our species.

Gog traditionally has been the end of days not the end of the world. The world will be converted into something else, but it will still exist. As captured territory, it will be disconnected from God. Gog and Magog are allies of Satan in the Christian world view. Satan is the prince of the air as in airways. As Marshall McLuhan observed, he is the greatest electrical engineer. With his media, he can convince us of anything even our seeking our own deaths through a fear based response. In the Alexander romances they were driven beyond a mountain pass to isolate them from us. Alexander's wall was made to protect us. The Quran said Dhul-Qarnayn (possessor of the Two Horns) made the barrier. The beings on the other side were cannibalistic. We understand Satan as having two horns. 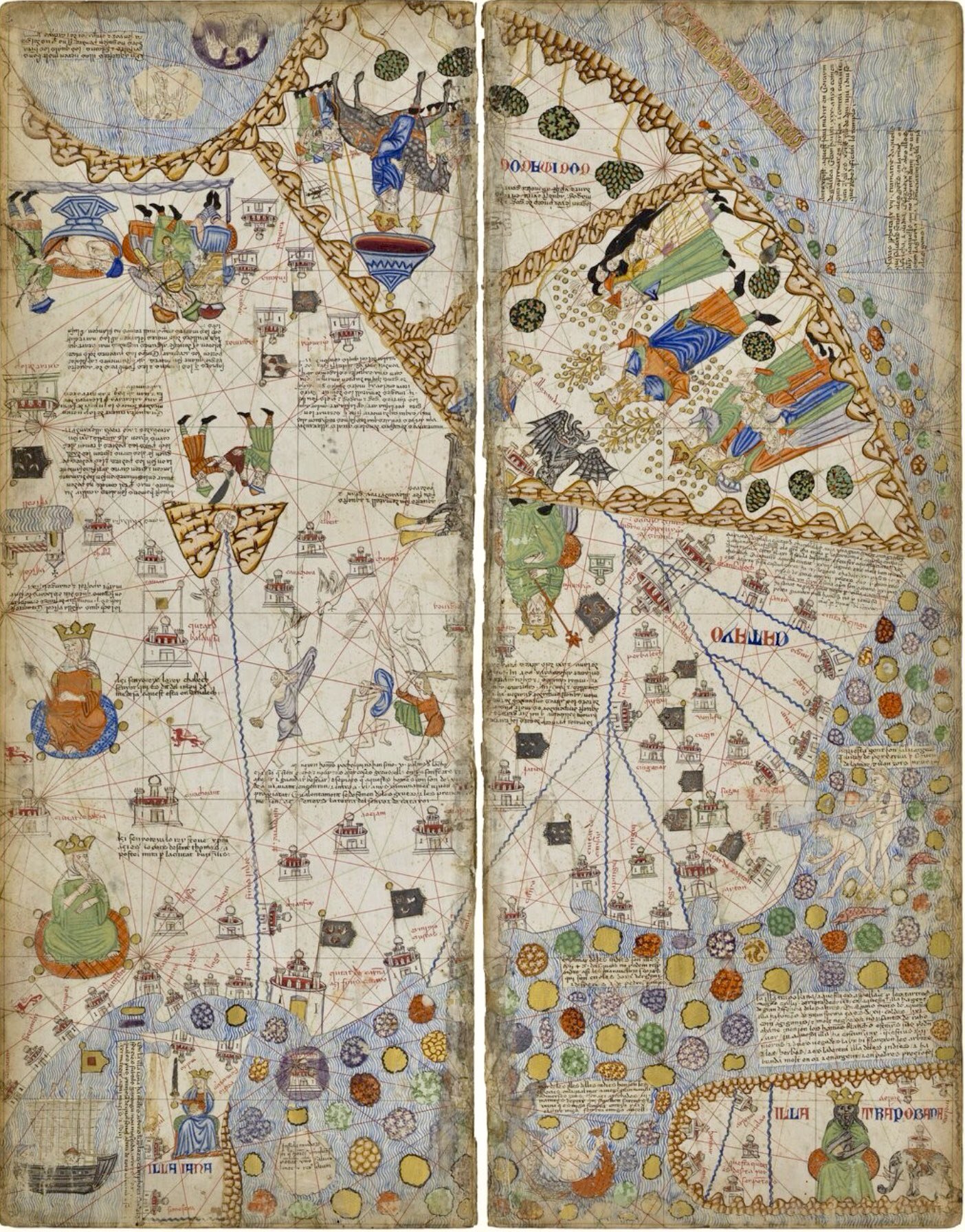 In the Book of Ezekiel, God warns men that their land will be under punishment for turning away from Him. It can be restored for coming back. Gog and Magog will be destroyed. Revelation says Satan will be released from his bonds after a thousand years to wage battle upon us. All nations will be deceived and his armies will be be greater than the sand on the seashore. That makes a bot army a certainty. It will be small and plentiful as well. Dhul-Qarnayn is enlisted to build the wall to separate us from these people of Gog and Magog. What if we expand our understanding with something like matter and anti-matter. Gog and Magog live near the sea that encircles the earth. Flat earthers speculate there is a said sea and ice mountain.

The Quran describes the foe as the size of a man with small eyes, claws, a hairy tail and large ears. They will invade through Syria and northern Iran at Khorasan. It is ironic those places have been the focal point for modern day conflict. According to Shia sources, Yajooj and Majooj are not from the Children of Adam (the human race). We have determined before from interpreting the Hebrew words they are Adam HaChadash the mystical, magical Adam better understood as AI or a robot. Their destiny is to eliminate the entire human race. And destroyed we will be. The Quran says as well that Allah removes the wall. Any interpretation involving places in our dimensional realm or God created beings is in error. That does not detract from the great prophecy scholars. They could have only limited understanding of the techology we have today if any. The book was sealed until the end of the age when that knowledge would be available.

The graph points to certain numbers. They can be verses in scripture. The upper pair are 42, 70. There are several bible references pertaining to the return of Christ.

Here we are advised to eat of the flesh and drink the blood to get eternal life.

In the Hebrew Jesus arrives from the sky heaven a water firmament. We are to eat the flesh and drink the blood. That may be a figurative explanation as opposed to a literal one. We must ingest the material that gives us the new mind and body. It will no longer be human 1.0. It will be human 2.0. The flesh and the blood will be converted to a synthetic form and have eternal life. Few, if any, could have understood that. Even today people are stretched to the limits of understanding.

The Parable of the Wicked Tenants

…43 Therefore I tell you that the kingdom of God will be taken away from you and given to a people who will produce its fruit. 44 He who falls on this stone will be broken to pieces, but he on whom it falls will be crushed.” 45 When the chief priests and Pharisees heard His parables, they knew that Jesus was speaking about them.…

The kingdom of God will be taken away. We will be crushed. This is the time. I feel many things were not properly understood by the ancients. They took us on a tenuous path. It was viciously fought over in the past. Today we are captives of that early path of understanding.

The prophet Ezekial was a priest in Solomon's Temple. In exile he spoke that the people would be punished for turning away from God. The people will be restored to Jerusalem when they return to him. God will destroy the hordes from the other side of the wall. So, in fact, this is a spiritual battle. In 1 Samuel 8 God tells Samuel that He will turn away from the people if they accept a king. By the same token if we reject a king, He will return to us. I'd say that's the only true option. The truth of that will set us free if we dare to do it. I started some years ago.