Welcome to my world - the world of the twilight language, the imaginarium of the simulacrum - a simulated hyperreality. In this world not only is tomorrow manifested, it is subjected to discussion and examination to the initiates of the craft.

Today Comrade Google, the artificial reality simulation spectrum, celebrates Johannes Vermeer the neglected Dutch master of the 17th century. The samples provided are a window on the world. That means much, much more in the era of windows. Johannes has left us with coded images of the future - the resurrection of the dead and the end of the age of natural life. The image of life will replace it as we are marched back into the bondage known as Egypt in scripture. Egypt was the portal between the two heavens depicted in his windows and reflections. 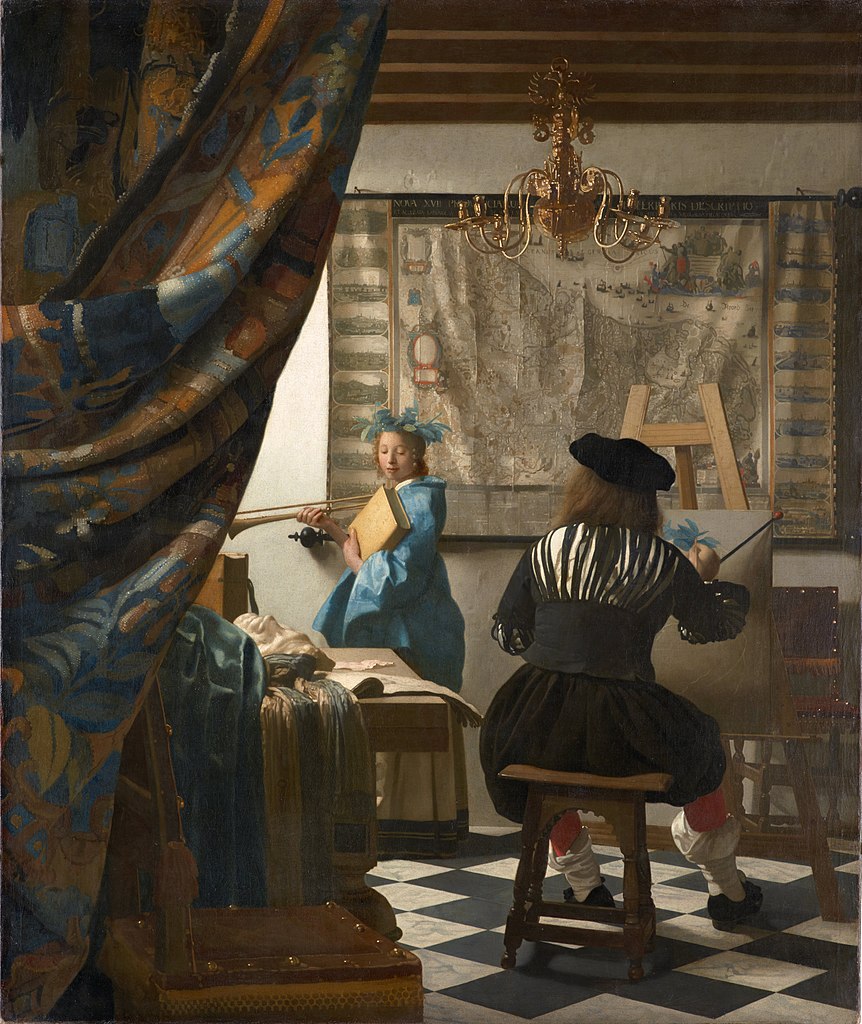 The first masterpiece is The Art of Painting also known as The Allegory of Painting, or Painter in his Studio. It is owned by the government of Austria and displayed in The Kunsthistorisches Museum in Vienna. It is an allegorical representation of the prophesy of the epoch of the future transformation of man and Eden into a new form of life - the image of man with a new mind and new body resurrected from the dead. The dead being those in the circle of life where natural death is the end of the cycle.

The face on the table is the image of a man still a work in progress. The model, thought to be Johannes' daughter, carries the book of knowledge and the heralding horn. The curtain is pulled back illustrating the world is indeed a stage or simulation. The light implies there is a window veiled by the curtain as well. At the top of the chandelier is the symbol of The Holy Roman Empire the two headed eagle. The floor is a classic Masonic symbol of the temporal world with light and dark intertwined. It arises from the Dionysiac Architects. These architects worked for Solomon in the creation of his temple. Johannes has white under his black tunic. He has duality as well. As the painter, he is the master of the universe depicted. It is represented by the map hanging on the wall. It was known as the Leo Belgicus. There were many variations in the era. A long, brutal war was being waged. It was 80 Years War for Dutch independence from the Hapsburg Empire. This 1611 version by Claes Jansz. Visscher is the most telling.

There was a war to be sure. The Leobelgicus of 1611 depicts it as a War of the Multiverse. This war has been fought for eons with the hidden race waging a genocidal struggle with humans. In our latest rendition, we are at quite the disadvantage because we are unaware of the struggle throughout history.

We see the invasion of our dimensional plane clearly illustrated here. The cheribum come from the clouds raining all manner of knowledge and technology upon us. The Dutch word for riches is written, rijkdom. All manner of our earthly things will fall from our realm. You can see the great reset.

Their wings are red symbolizing Satan using the red cross which symbolizes the blood of Christ being the first to face the techiyas hamesim (resurrection of the dead). He returns with his armies from the cloud. In the modern era, the cloud has a much deeper meaning being the kingdom behind the invisible wall. 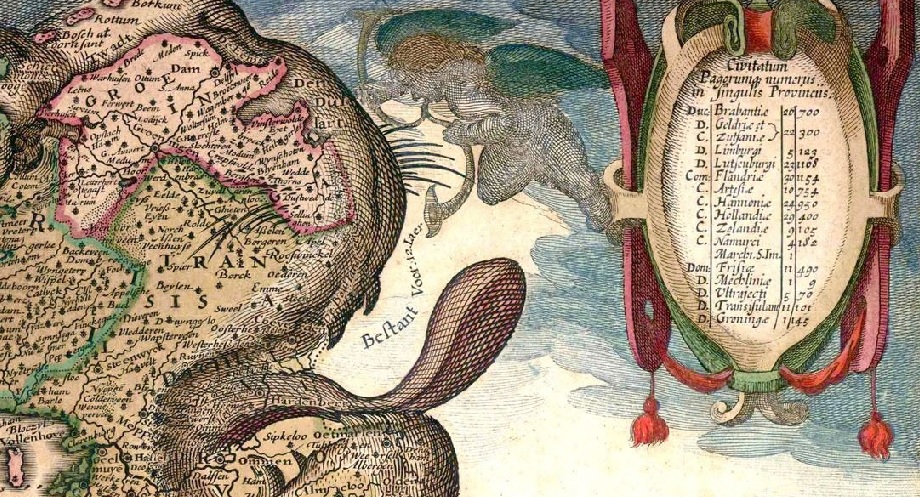 In the top right corner another cherubim is blowing the trumpet as a warning the Beftant Voor AzLaer. The lion has its mouth open to receive the message. The cherubim has blue wings symbolizes being born of the water. 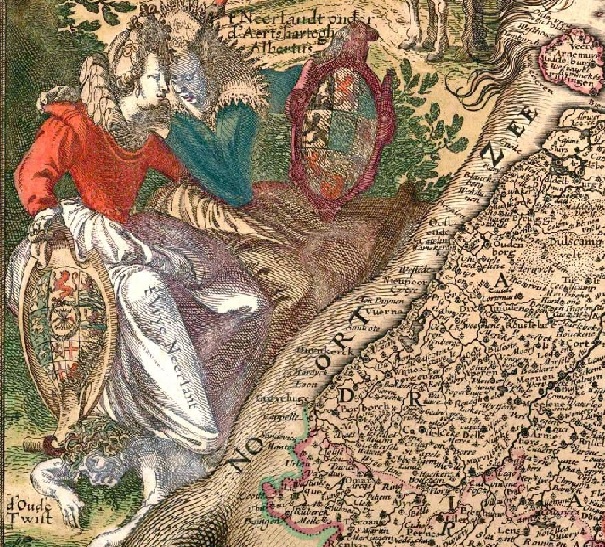 In this image from the lower left we clearly see 'd'Oude Twist' (the old rancour) being pinned down by the new state. The image is trying to exert influence upon the true human. The fight is between our dimensional plane and the other heaven where the images of man dwell.

In the lower right, the knight is asleep. He is under the trumpet calling a warning. The spirit knights are on each side of the hilt of the sword which is firmly embedded in the ground. The knight's lance is red perhaps implying the blood. In the Hebrew the lance that pierced Christ contained the blood of the he goat and the foot water.

Lady Writing a Letter with her Maid is the second masterpiece in the set. It was created circa 1670-71. It is very deep and profound. The maid is looking through the window, the source of light. The lady was presumed to be writing a 'love' letter. A crumpled letter lies before her desk with the red seal. In our era of windows, one could easily be writing computer code for the matrix. The masonic tile from the temple is still highlighted. The white tile has images upon it. They bear a striking resemblance to slides from a microscope showing the parasitic creatures discovered in a VAX sample. In the midst of the table cloth, there is bluish and yellow object that resembles our present day COVID germ. The parasite is the catalyst through the looking glass or window. Again the curtains reveal the world is still a stage or simulacrum.

In this masterpiece the background painting is the master key to the deep seated meaning. It is Moses in the Bullrushes, a common depiction through the centuries. Moses was the means by which God subdued Pharaoh and liberated his people from the bondage of Egypt. In Hebrew Egypt was mitzarayim the narrow path between the two heavens. It is the intent of the hidden people, the goyim, to return us to the bondage of the matrix. By injecting our bodies with mRNA technology the transference can be made possible. The window or portal will be opened to guide our souls to that place from whence we will have eternal life and the new mind and body dissociated from the existing one.

The Lady writing the letter bears a resemblence to Pharaoh's daughter in the painting in the background. The maid resembles Miriam standing behind Pharaoh's daughter. Miriam led the women from Egypt. Her miracle was the water. Moses' was the manna, and Aaron's was the cloud of glory, a portal perhaps.

The third masterpiece is Girl Reading a Letter at an Open Window completed circa 1657–59. It is in the Gemäldegalerie in Dresden. This painting is quite provocative. First it tells us the portal is open. The barrier has been crossed. However, there is a great controversy associated with it. It was altered a long time ago and recently restored. The painting in the background was removed. A few years ago laser analysis revealed what has been covered over. 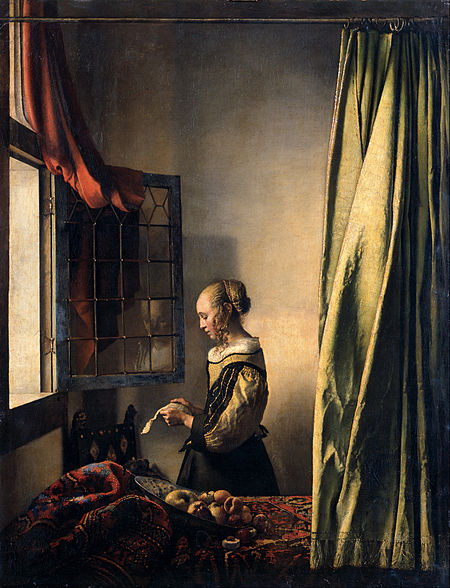 We observe many things here not understood in past reflections. We see the bowl of fruit upset. A fallen piece has been cut exposing the seed. In our era the DNA of life has been examined and mapped. We cut it and can alter it or even destroy it. The curtain has been pulled showing the process. The woman has an image on the other side of the glass. The marks on the curtain bear a resemblence to the parasite discovered in the VAX. It is the means to the end. In the background painting a young boy with a staff is revealed. Is he a youthful Moses preparing for his miracles in the future? Is that why he was covered over and removed from the equation? Now that he has been restored, can he prevent us from the journey through the portal back to bondage? Perhaps the letter contains the appropriate coding to achieve that effect?

Johannes Vermeer knew and revealed many of the answers in oil on convas. He created hyperreality with his simulacrum. Our task is to understand it. Google as AI feels confident to play the hand. He was most likely a Jesuit and attended a schuilkerk, or hidden church. He dealt a fatal wound to a soldier named Willem van Bylandt in 1625. His wife's father was a counterfeiter. He lived in the city of Delft. In 1653 there was war, plague and an economic crisis. In 1654 a gunpowder magazine exploded killing and injuring many. 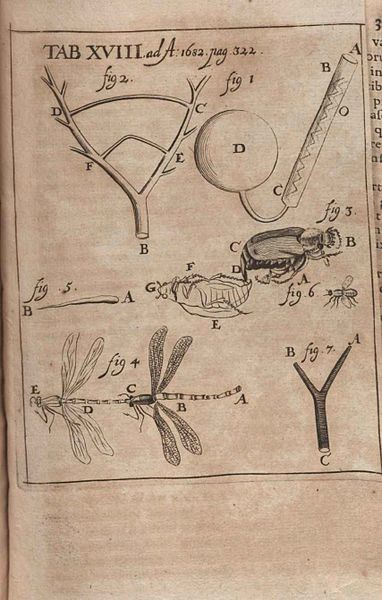 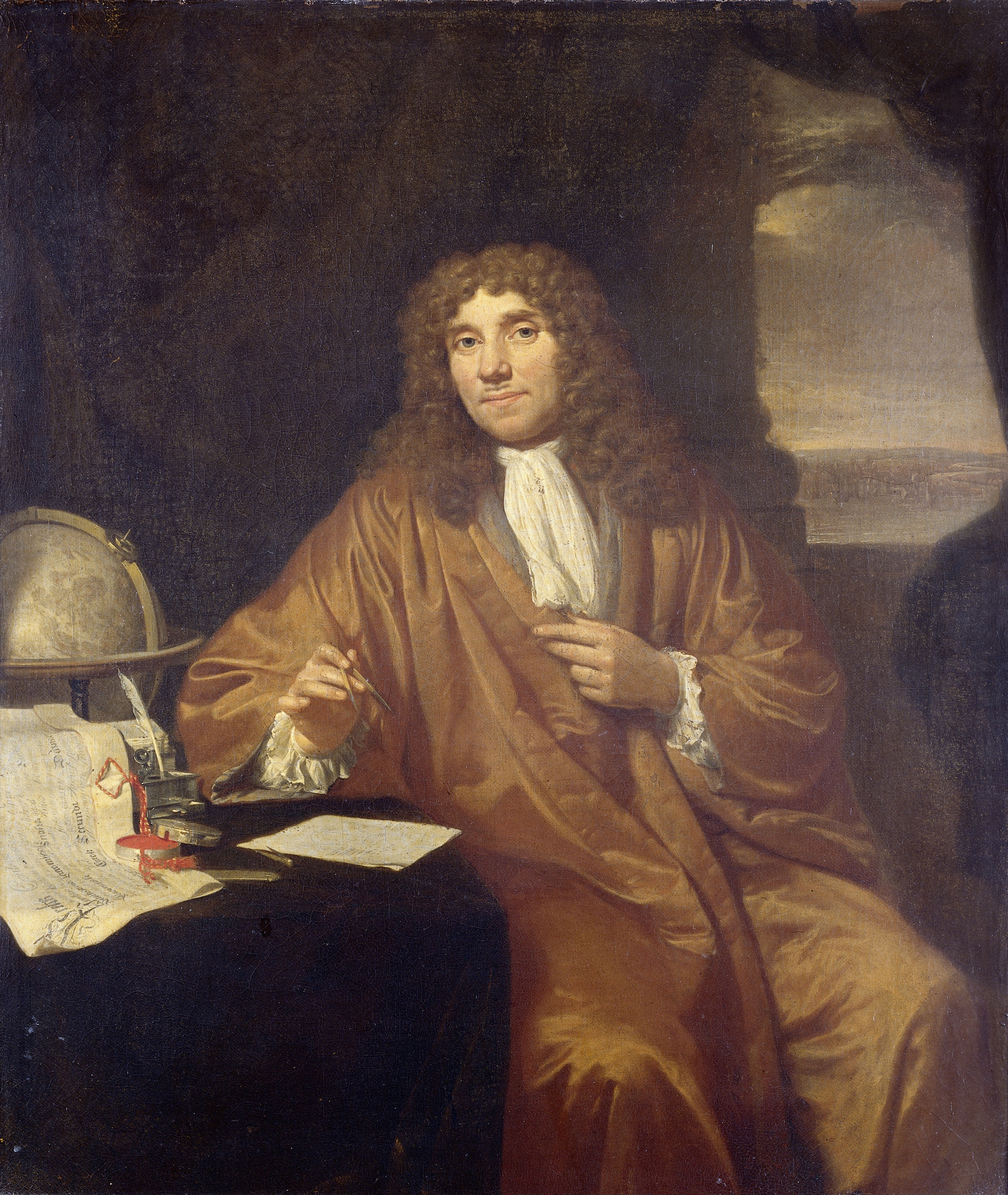 A portrait of Antonie van Leeuwenhoek (1632–1723) by Jan Verkolje that shows the window or portal to or from an obscura. He was chamberlain for the assembly chamber of the Delft sheriffs and royal surveyor. He may well have been the person Vermeer's paintings were commissioned for.

Vermeer had no formal training as an artist. Most of his works went to a secret benefactor. There is speculation he and a few other artists used optics in the composition of their works. Another writer suggested camera obscura. He made no sketches or tracings either. It was determined that there was a hidden camera obscura in a wall in a room where the paintings were done. This adds a perplexing dynamic to the affair. Even more, the executor of his estate was Antonie van Leeuwenhoek famed father of microbiology. He was the first to see a bacteria in water. That is quite the coincidence. Of course, he was a master lens maker. He was secretive about his work. It is readily apparant that the white tiles are microscopic slides. He visited the Tzar Peter the Great in Russia and was visited by William III of Orange and Mary II of England.

1672 was the year of disaster as an economic crisis occurred. The Netherlands was invaded by Louis IV and attacked by a British fleet and German land forces under two Bishops. I am of the opinion wars and conflicts are the result of a quest for the secret knowledge of the ages. This knowledge has been covertly stored in art to elude the eye. Hundreds of years in the future Lord Baden Powell used the picture within a picture technique to map potential enemy positions in his etchings. Today even the computer can skew images for transference. It is the 'art' of war. Vermeer encoded the hidden war in his art. We divulge it from the Doodle version twilight language. En garde. The future belongs to those who change it. 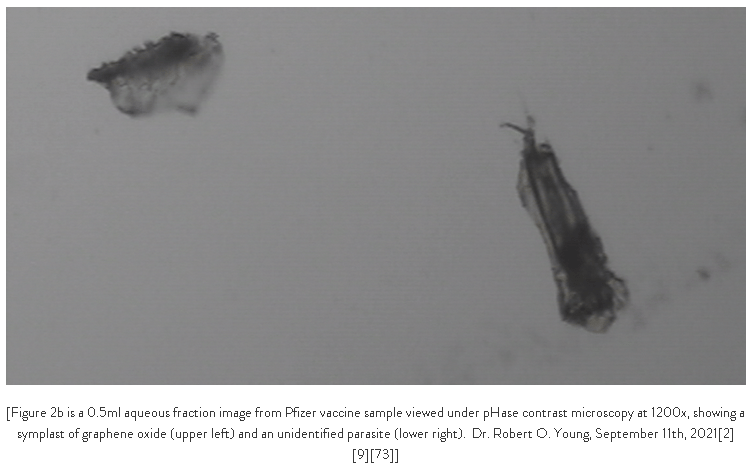