"People, it's time to shut down the Covid juggernaut..." 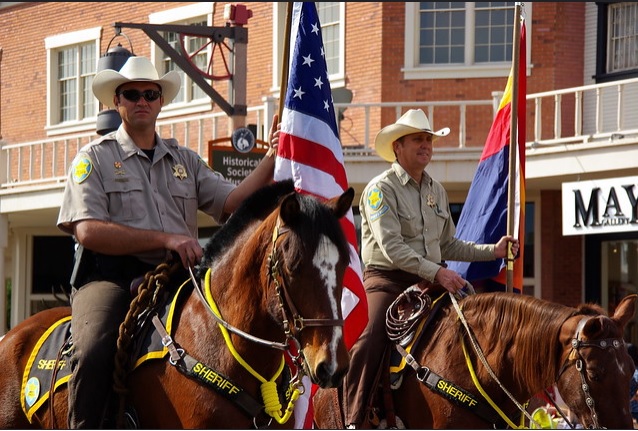 I've called for Sheriffs to form posse while Trump was still president. If you couldn't smell the scent of evil on the horizon, you were without senses. I call to form posse every time I host Power Hour. It is the last bastion against the complete collapse of the union and the enslavement of the nation if not the absolute genocide of its people and the rest of the world. If there is anywhere it can be arrested, it is in the United States. The Lord was kind and wise to allow me to preach there as opposed to my own country. That is the front line. By God's grace the call is heeded and the job is done. You can't sit this one out.

To my friends on the way to the Sheriff's convention take heed and spread the word. Everyone has to step into a role far greater than they ever imagined possible. We The People are the government not the cronies managed by hidden hands and funds to lead the war against us. Make no mistake about it. It is a war. It just isn't declared because there is no mechanism to inform the people they are done. You learn by your slaughter as you gasp your last breath. It's a trifle late at that point.

…before it shuts US down—FOREVER!

Submitted by The Angry Patriot

Folks, this is it!

No one can hide anymore.

This thing called Covid is in everyone’s back yard.

That’s right—for the first in US history there ain’t a single NIMBY to be found.

And that’s a good thing.

By the way, we’re talkin’ to every Patriot and every Progressive.

Every conservative and liberal … every Republican and Democrat …

Christian and Muslim, Jew and Hindu, Atheist and Agnostic.

There are many ways to skin this cat.

HOWEVER, there’s only time to do what will work … and work fast.

The Covid tyrants in the middle need to be much more afraid of We the People than they are of their NWO paymasters and Deep State handlers.

Until they fear us more than them, they will continue committing their Covid crime sprees against the American people.

Nothing — NOTHING — will change until the mayor or the school board president or county commissioner or corporate officer or city council member or NGO director or university chancellor fears YOU and ME more than they fear the power elite who criminally installed them.

Got it? If not, then get it — FAST! Because the window of opportunity is closin’ real fast.

The Covid perps know their time is up, and they’re ready to do whatever is necessary to lock US down FOREVER.

The Covid criminals know they have crossed every line … and that there’s no goin’ back for them.

The Powers That Be have exposed themselves like never before in history. And they’re still outing themselves in the midst of this greatest crime wave ever to wash over the entire planet.

It really is either US or THEM.

There’s no room on Earth for the both of us.

Their egregious crimes against humanity, against God, against the planet, are now too many and too devastating to sweep under the rug with the execution of OPERATION COVID-19.

Do something! Anything … Anywhere … Anyhow you must to fiercely resist and ferociously protest the intensifying Covid tyranny. And, do it in such a way that you put the fear of the Creator in them.

Every Covid criminal co-conspirator needs to feel that the wrath of God Almighty is now upon them … because it really is.

That wrath, that visceral anger, that righteous indignation is upwelling across the 50 states in the form of an enraged citizenry.

Never have so many common folk been this exasperated with regard to everything and anything the government touches.

The folks at SOTN posted a plan not too long ago. The plan is so radioactive they shut ’em down.

The sheriffs answer directly to the citizens. And those sheriffs can legally deputize citizens as undersheriffs when the legitimate need arises.

That need has arrived.

Then, the citizen-run trials can begin while the indicted are detained by the sheriffs in the county jails.

Once the verdicts are entered into the record, the Covid perps can be sentenced harshly for their heinous crimes against the American people.

Bottom Line: All of them must be taken off the street before they put us in the Walmart-converted FEMA camps. See: WHY ARE WALMART’S AROUND THE COUNTRY LOOKING LIKE THIS? (Video)

Now, here’s a better breakdown of the “partnership plan”.

Above all, people need to put their hands together and get on their knees and pray like there’s no tomorrow.

Because if we don’t, my fellow Americans, there won’t be a tomorrow.

Following the Baltimore riot of 1968, 1,500 lawsuits were filed against the city of Baltimore seeking compensation for damages sustained due to the failure of the police to suppress the unrest. The city sought declaratory judgment arguing that it could not be liable for any failures of the Baltimore municipal police, as it was an agency of the State of Maryland and the city had no law enforcement authority. In rejecting the argument, the Maryland Court of Appeals observed that Baltimore, as an independent city and – therefore – a county equivalent, was still in possession of the ability to summon the power of the county as that right had not explicitly been repealed by statute and, therefore, remained part of the common law.[24] The court noted:

A mayor has the right to form posse as well.