While some doctors are encouraging people to get in line for their COVID-19 “vaccine,” others are bravely speaking out about why rushing to get an untested shot might not be such a good idea.

Dr. Lee Merritt, a former president of the Association of American Physicians and Surgeons, has admitted that she believes the current coronavirus “vaccines” are actually very dangerous bioweapons that are being deployed against the population.

Dr. Merritt knows plenty about bioweapons, having studied them while she served as an orthopedic surgeon for the United States Navy for nearly a decade. She has also published several peer-reviewed papers and was on the board of the Arizona Medical Association.

In an interview with The New America, Dr. Merritt said that she believes we’re living in a time of “fifth-generational warfare” where covert biological agents, propaganda and economic warfare are being used instead of weapons on the battlefield to turn the tide of power between nations.

She said that vaccines are most effective when they are used for deadly, untreatable viruses like polio and smallpox. However, scientists have already found some promising coronavirus treatments, such as hydroxychloroquine and intravenously delivered vitamin C, which makes one wonder why a vaccine is so urgent.

She stated: “If we are at biowarfare right now as a part of this multi-dimensional warfare, if you have a treatment in your back pocket, they cannot terrorize you with viruses and that’s important because… [the vaccine] doesn’t prevent transmission by their own admission.”

Of course, the media regularly censors information about effective ways to prevent and treat the disease, leaving the masses to believe a vaccine is the only option.

Social media is also doing its best to silence those who share information about natural ways to reduce your risk, and the major platforms are also working overtime to stop people from discussing the potential dangers of these vaccines.

Unfortunately, as she points out, coronavirus vaccines are nothing like the vaccines we have long used.

With these vaccines, messenger RNA is injected into people’s bodies, which changes their genetic code so they start producing their own modified version of the virus, which the immune system learns to fight – at least in theory.

However, not only has this particular vaccine never been tested over the long term, but this entire approach to vaccination has never undergone long-term studies to prove its safety in humans.

Animal studies have shown an “antibody-dependent enhancement” that sees the virus making its way into the body undetected because a person’s immune system sees it as being part of the body, she says, which can cause swift death.

In fact, she says that the longest they have ever followed people after getting the vaccine is two months, which is not nearly enough time to determine if there will be an antibody enhancement problem.

This, she says, is precisely how a foreign adversary would go about waging clandestine biowarfare on its enemies without the process being traced back to them.

She calls the vaccines “a perfect binary weapon,” saying:

“There’s no way I know exactly what that mRNA is programmed to and neither do you and neither do most doctors. The doctors can’t get at that data. That’s for the guys at the very top of this project…

“If I were China and I wanted to take down our military, I’d just make an mRNA that I know it doesn’t exist in nature so nobody’s going to die from a vaccine and then two years later, I release whatever it is that I made… and it causes this immune enhancement death.”

When you see all the footage of people proudly rolling up their sleeves to get the coronavirus vaccine, it’s pretty scary to think of what might happen if Dr. Merritt is right and the masses are willingly being injected with a form of weaponized medicine. 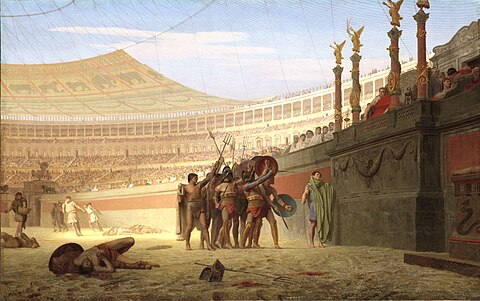 Avē Imperātor, moritūrī tē salūtant ("Hail, Emperor, those who are about to die salute you") is a well-known Latin phrase quoted in Suetonius, De vita Caesarum ("The Life of the Caesars", or "The Twelve Caesars"). It was reportedly used during an event in AD 52 on Lake Fucinus by naumachiarii—captives and criminals fated to die fighting during mock naval encounters—in the presence of the emperor Claudius. Suetonius reports that Claudius replied "Aut nōn" ("or not").

I alter that to you who are about to die salute them not.