After COVID, Davos Moves to The "Great Reset" 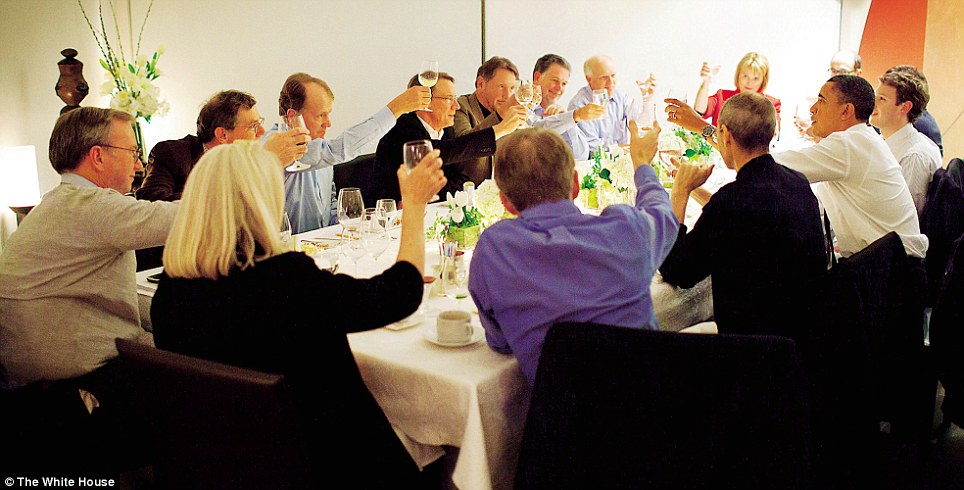 With the USA Biden Presidency, Washington has rejoined the Global Warming agenda of the Paris Accords. With China making loud pledges about meeting strict CO2 emission standards by 2060, now the World Economic Forum is about to unveil what will transform the way we all live in what WEF head Klaus Schwab calls the Great Reset.

Make no mistake. This all fits into an agenda that has been planned for decades by old wealth families such as Rockefeller and Rothschild. Brzezinski called it the end of the sovereign nation state. David Rockefeller called it “one world government.” George H.W. Bush in 1990 called it the New World Order. Now we can better see what they plan to impose if we allow.

The Great Reset of the World Economic Forum is a 21st Century rollout for a new form of global total control.

“We only have one planet and we know that climate change could be the next global disaster with even more dramatic consequences for humankind. We have to decarbonise the economy in the short window still remaining and bring our thinking and behaviour once more into harmony with nature,” declared WEF founder Schwab about the January 2021 agenda.

The last time these actors did something at all similar in scope was in 1939 on the very eve of World War II.

At that time the Rockefeller Foundation financed a top secret strategy group working out of the New York Council on Foreign Relations. It was known as the War and Peace Studies and headed by ‘America’s Haushofer,’ geographer Isaiah Bowman of Johns Hopkins University. Before German Panzer tanks had even rolled into Poland, they were planning a postwar world where the United States would emerge as the sole victor and replace the British as the global hegemonic power.

Formulation of a US-dominated United Nations and Bretton Woods monetary order based on the dollar was part of their project. In 1941 as America formally entered the war, the CFR group sent a memo to the US State Department:

“If war aims are stated which seem to be solely concerned with Anglo-American imperialism, they will offer little to people in the rest of the world. The interests of other peoples should be stressed. This would have a better propaganda effect.”

That successful project has been the framework of what Henry Luce in 1941 called the American Century, and lasted until quite recently.

Now those same families, again including the Rockefeller Foundation and the Rothschilds in the person of Lynn de Rothschild’s “Council for Inclusive Capitalism with the Vatican,” are moving to create the next generation in their pursuit of global domination. It’s being called the Great Reset. It requires global government, a plank significantly endorsed by the Jesuit Pope Francis. Its PR man, Klaus Schwab, is a self-admitted protégé of Rockefeller insider Henry Kissinger, from their days 50 years ago at Harvard.

In May, 2020 as the coronavirus had caused global panic lockdowns far beyond the initial outbreak in Wuhan, the British Crown Prince Charles, together with the World Economic Forum founder Klaus Schwab, unveiled what they gleefully named the Great Reset. Increasingly world political and business leaders are using terms such as “the Great Reset,” or “the Fourth Industrial Revolution” and thecall to “Build Back Better” which the Biden Administration prefers. They all are anchored on the same set of dramatic global changes. The US Green New Deal and the EU European Green Deal are all part of it. 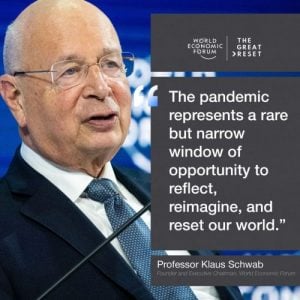 The most striking fact about the agenda of the Great Reset is that it is being advanced by the same giga-rich plutocrat families responsible for the flaws of the present world economic model. They, not we, have created ruin of organic fields and nature with their Roundup glyphosate and toxic pesticides. They have ruined the air quality in our cities by the transportation models they force on us. They created the “free market” model of globalization that has ruined the industrial base of the United States and the industrial EU nations. Now, as they blame us for an alleged catastrophic emission of CO2, we’re being conditioned to accept guilt and be punished in order to “save the next generation” for Greta and friends.

Behind the seductive rhetoric of the Powers That Be on creating a “sustainable” world, lies an agenda of raw eugenics, depopulation on a scale never before tried. It is not human, in fact, some call it “transhuman.”

In 2016 WEF head Schwab wrote a book titled Shaping the Future of The Fourth Industrial Revolution. In it, he describes the technological changes coming with the 4th Industrial Revolution of 5G smart phones, Internet of Things and Artificial Intelligence that link everything to everything to make the most banal decisions for us such as buying more milk or turning down the stove. At the same time data is centralized in private corporations such as Google or Facebook to monitor every breath we take.

Schwab describes how new generation technologies, already being rolled out by Google, Huawei, Facebook and countless others, will allow governments to “intrude into the hitherto private space of our minds, reading our thoughts and influencing our behavior…Fourth Industrial Revolution technologies will not stop at becoming part of the physical world around us — they will become part of us,” said Schwab. “Today’s external devices — from wearable computers to virtual reality headsets — will almost certainly become implantable in our bodies and brains.”

Schwab adds, “What the fourth industrial revolution will lead to is a fusion of our physical, digital and biological identity.” Among those fusion technologies are, “active implantable microchips that break the skin barrier of our bodies,” Schwab explained. These “implantable devices will likely also help to communicate thoughts normally expressed verbally, through a ‘built-in’ smartphone, and potentially unexpressed thoughts or moods by reading brain waves and other signals.” I don’t know about you but I am not eager to have the state or Google read my brainwaves.

The confusing aspect for many is the plethora of front groups, NGOs and programs which all lead to the same goal: the drastic control over every member of society in the name of sustainability—UN Agenda 2030. Nowhere is it more ominous than in their plans for the future of our food. After creating the present system of globalized industrial agriculture, agribusiness, a project begun in the 1950s by the Rockefeller Foundation, the same circles now advocate “sustainable” agriculture which will mean a shift to genetically edited fake foods, lab-made synthetic meats and such, even including worms and weeds as new food sources.

The WEF’S Schwab has partnered with something called EAT Forum, which describes itself as a “Davos for food” that plans to “set the political agenda.” EAT was created in Sweden in 2016 with support from the UK Wellcome Trust (established with funds from GlaxoSmithKline), and the German Potsdam Institute for Climate Impact Research. Lab-grown synthetic gene-edited meats are being supported among others by Bill Gates, the same one backing Moderna and other genetically edited vaccines. EAT works among others with Impossible Foods and other biotech companies. Impossible Foods was initially co-funded by Google, Jeff Bezos and Bill Gates. Recent lab results showed the company’s imitation meat contained toxic glyphosate levels 11 times higher than its closest competitor.

In 2017 EAT launched FReSH (Food Reform for Sustainability and Health) with the backing of Bayer AG, one of the world’s most toxic pesticide and GMO producers that now owns Monsanto; the China-owned GMO and pesticide giant Syngenta, Cargill, Unilever, DuPont and even Google. This is the planned food future under the Great Reset. Forget the traditional family farmer.

In his 2020 book on The Great Reset, Schwab argues that biotechnology and genetically modified food should become a central pillar to global food scarcity issues, issues which COVID has exacerbated. He is pushing GMO and especially the controversial gene-editing. He writes “global food security will only be achieved if regulations on genetically modified foods are adapted to reflect the reality that gene editing offers a precise, efficient and safe method of improving crops.” Gates, a project partner with Schwab since years, has argued the same.

EAT has developed what it refers to as “the planetary health diet,” which the WEF champions as the “sustainable dietary solution of the future.” But according to Federic Leroy, a food science and biotechnology professor at University of Brussels, “The diet aims to cut the meat and dairy intake of the global population by as much as 90% in some cases and replaces it with lab-made foods, cereals and oil.”

Like everything else with the Great Reset, we will not be given a real choice in food. EAT notes it will be forced on us by, “hard policy interventions that include laws, fiscal measures, subsidies and penalties, trade reconfiguration and other economic and structural measures.” We will all be forced to eat the same synthetic diet or starve.

This is just a hint of what is being prepared under the guise of COVID-19 lockdowns and economic collapse, and 2021 will be a decisive year for this anti-human agenda. The introduction of AI, robots, and other digital technologies will enable the Powers That Be to dispose of hundreds of millions of workplaces. Contrary to their propaganda, new jobs will not be sufficient. We will become increasingly “redundant.”

This all seems too surreal until you read from their own descriptions. The fact that the cabal of the world’s most influential corporations and billionaires sit on the board of WEF with Kissinger’s student, Klaus Schwab, along with the head of the UN and of the IMF, with the CEOs of the world’s largest financial giants including Blackrock, BlackStone, Christine Lagarde of the European Central Bank, David Rubenstein of Carlyle group, Jack Ma, richest billionaire in China, is proof enough this Great Reset is not being done with our true interests at heart, despite their silky words. This dystopian agenda is 1984 on steroids. COVID-19 was merely the prelude.

Note to readers: please click the share buttons above or below. Forward this article to your email lists. Crosspost on your blog site, internet forums. etc.

F. William Engdahl is strategic risk consultant and lecturer, he holds a degree in politics from Princeton University and is a best-selling author on oil and geopolitics, exclusively for the online magazine “New Eastern Outlook” where this article was originally published.

He is a Research Associate of the Centre for Research on Globalization.

Remember you human are carbon life. Kiss your ass good bye. EAT sounds like Soylent Green, but the term was already taken.